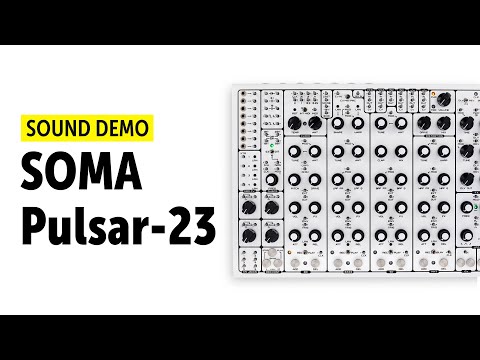 Übersetzung anzeigen
Original zeigen
Leider ist ein Fehler aufgetreten. Bitte wiederholen Sie diese Aktion später.
M
A Lego drum machine. Muschbit 03.08.2021
Edit after almost a year of using it.
_The Bass synth really sounds fat and it has "something".
_The Kick looses power as soon as the attack is not the shortest, Bit annoying. But solvable by the several independent output.
-The SD voice is the "weak" point of this instrument in my opinion.
_Sounds unique, I pair it with a more "classic" drum machine.
_It's a very inspiring instruments.
_It is indeed expensive, If you consider it from another point of view, all those modules as eurorack, it is kinda cheap.
_Get more cables, 40 is definitely not enough when you start to connect it to other instruments.

-here is my first impression-
It's a very good instrument and has its own character.
The overall sound is quite "metallic" to my hear and I like that. The way one can mix the regularity from sequencing via midi or CV with the chaotic/jazzy spirit of the instrument.

Pulsar lives from 0 to 10V.
It can be trigger by the drum gate of the keystep pro is you set them to 12V and then through one of the atenuator or the MIDI learn pins. (which is good then you don't lose the modular aspect).

I controled it also via MIDI using the Novation Circuit. and it works perfectly.
I haven't tried to trigger it via an eurorack sequencer.

I like how one can create a chaotic beat which still has some structure.
This instrument is not limited to chaotic drum and polyrytmic stuff.

Cons:
_crocodiles clip are not as fun to use as eurorack cables.
_has only 4 voices.

Pros:
_the sound character (pulsar has personality in the way it sounds).
_inspiring workflow.
_kick asses :)

It's the most expensive gear I bought so far. But I love it.
Bedienung
Features
Sound
Verarbeitung
5
0
Bewertung melden