Ansprache Features Sound Verarbeitung
J Sax 2.0 by NUVO
avalerocabre, 29.12.2020
By far the worst of all the NUVO instruments I have tested thus far. In spite of my 20 years experience playing alto, soprano and tenor sax (not all of the highest quality). The instrument design looks beautiful (I also got the kit to straighten it up and make it look as a mini soprano sax). Nonetheless, no matter how much time I spent practicing or the many different reeds I tried it with (both plastic by NUVO, no. 1, no. 1 and 1/2, and no. 2 and also, new or used soprano sax professional reeds Vandoren and Rico , 2 and 1/2 and 2 and also clarinet reeds Vandoren 2 and 1/2), the sound is awful and the worst, completely out of tune. I guess it sounds more acceptable in demos shown over the NUVO site or on YOU TUBE because it played via an auto-tune, which polishes a bit the tuning of some notes. I have serious doubts also about the general tuning of the instrument, presented as being a C instrument. Indeed the general tuning of the J Sax changes when using the curved neck and pavilion compared to the straight version of such (which is bizarre). Additionally, using the curved neck, the mouth piece does not insert and stays very solidly attached (it moves a bit laterally, hence probably not really sealed), and you do not have any stopper symbol indicating how deep in has to be inserted for adequate tuning. Personally, I would not recommend to buy a J sax to any kid or grown up. Not even as a colorful toy instrument, which waked come at expensive to be used for such matters and ery hard anyway for kids (I have tried with 4 and 5 years old) to get an acceptable sound from it. Indeed, I would love if NUVO (or THOMANN the French-German distributor) would offer to reimburse me the 95 Euros plus the 15 Euros for the straight J sax adapter and pavilion) spent on it !!!! Although te this points this is the least of our problems, the J Sax case, sturdy, and made of rough plastic does not look very nice and it is too bulky for what it is. It could be better designed to integrated space for the straight neck, more reeds and the straight pavilion if necessary. It seems the instrument needs to be overhauled and re-designed again to at least produce an acceptable sound. Initially I believed the problem might lay on the hardness of the plastic reed used to play, but attempts to play it with a bambou or a plastic reed did not make any difference to me. It is the only musical instrument I have been explicitly banned by all my family members to play anymore at home after 3 weeks of hard testing !!!. Have I been unlucky and got the only J Sax 2.0 that does no play properly or al instruments have to bear from the same problems?
Hilfreich · Nicht hilfreich · Bewertung melden
Bewertung melden... 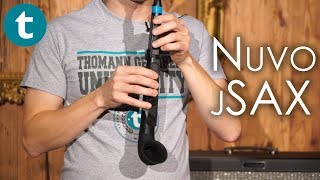 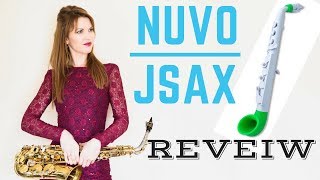