6. Popular bass models and their history 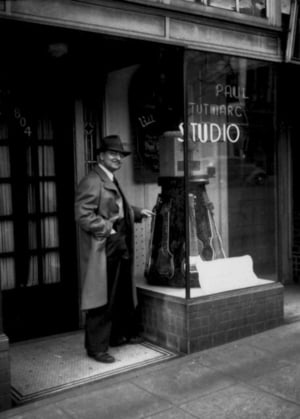 Electric basses before the Fender era

The true developer of the electric bass may have been the musician and inventor Paul Tutmarc with his company Audiovox Manufacturing Co., a small outfit which produced the #736 Electronic Bass Fiddle from 1935 to 1936. The invention was so far ahead of its time that Audiovox went bankrupt in 1950. The Electronic Bass Fiddle and its inventor were largely forgotten.

Motivated by the success of his electric guitars, Leo Fender, a radio technician from California, introduced the first mass-produced electric bass in 1950. This was, of course, the Fender Precision Bass, also known as "P-Bass" or "Preci". Unlike the double bass, it was fitted with frets, which allowed "converting" guitarists to hit the low notes accurately. "Intonation with precision" was the slogan of the hour.

Because of the increasing volume of the bands of that period, the double bass had become more and more of a problem. It simply couldn't hold its own against drums, percussion, brass and electric guitars. While Fender did incorporate some elements of the double bass in his first Precision models (e.g. actions and strings), it soon became an instrument of its own, based on the body style of the Telecaster guitar and featuring specifically developed components.

The body style was modified several times in the following years and the Precision Bass received its best-known shape in 1958. Equally important for classification is the split coil pickup of the P-bass—more on that later!

Experts agree that the legendary Motown hit singles wouldn't have been the same without the pumping Precision Bass played by house bassist James Jamerson. But the Fender Precision can also be heard on countless other tracks spanning the entire history of pop, rock, soul and funk.

1960 saw the introduction of the Fender Jazz Bass (also known as J-bass), featuring two single coil pickups. The Jazz Bass as it is known today saw the light of day in 1962. It features three rotary potentiometers: one volume knob for each pickup and a passive tone control. In contrast to the Precision Bass, it is also characterised by its slim "waistline", which is why it is sometimes associated with a female figure.

In 1965, Leo Fender sold his company to the media corporation CBS, because he had been diagnosed with Parkinson's disease and needed funds to cover the medical expenses. Vintage guitars and basses from the pre-CBS era are highly sought-after by collectors and traded for ludicrous amounts of money.

Also during this period, several details changed in the styling of Fender guitars and basses, like the logo, the shape of the head and the serial number. Extensive literature is available on the subject of these subtleties. This can be useful if you're interested in buying a used Fender guitar or bass from this period, because these intricacies allow for an exact historic classification of the instrument, so you don't have to rely on the seller's declarations alone.

Due to a rising number of inexpensive Fender replicas from the Far East, Fender eventually began to copy itself under the Squier brand. Squier guitars and basses were initially produced in Japan. Despite being inexpensive imitations of Fender models, some of the early Squier instruments from the 1980's are now in high demand among collectors. To this day, Squier instruments are a good and relatively inexpensive alternative to the Fender originals.

All of the original Fender models have become classics, and Fender-style basses are now available from a wide range of manufacturers from around the world. However, several other companies are responsible for many important innovations (e.g. electronics) and have developed their own, original types of instruments, and they should not be overlooked. If you're shopping for a bass, it is a good idea to look beyond the classics and consider some of these more modern basses, which may be a better choice depending on the style of music you play.

Starting in 1972, Leo Fender built new instruments with the newly founded company Music Man. Their Stingray model had risen to worldwide fame by about 1976. It was the first bass with a factory-fitted, active tone control. Its very distinctive, aggressive sound can be heard on recordings by Rage Against The Machine, among others. Together with the Fender Precision and Jazz basses, the Music Man Stingray is now considered part of the "Bermuda triangle" of the best-known and most popular bass models.

In 1980, Leo Fender founded G&L guitars with his friend George Fullerton, and once more enjoyed worldwide success. He passed away at 82 years of age on March 21st, 1991, in his hometown of Fullerton, California.

Gibson basses have never been able to match the success of the company's guitars, despite being excellent instruments in terms of craftsmanship and sound. As early as 1953, the company introduced the violin-shaped EB-1, which featured painted F-holes and a foot, which enabled the player to hold the instrument upright like a double bass.

The EB-0 was introduced in 1959 and was more successful. It eventually led to the EB-3 in 1961. Its shape was modelled after the Gibson SG guitar. The EB-3 had a fat Humbucker pickup at the neck position (the so-called "Mudbucker") and a single coil pickup near the bridge. It was made popular by musicians such as Jack Bruce of the legendary band Cream.

Gibson's most eye-catching bass model was introduced in 1963. The Thunderbird's jagged shape is the brainchild of Ray Dietrich, an automobile designer. Its protruding, angular body and its massive, mid-heavy tone have made this bass popular among rock players like Pete Way (U.F.O.) and Nikki Sixx (Mötley Crue).

Gibson's daughter company Epiphone produces some very nice reissues of classic Gibson basses (like the semi-acoustic Rivoli bass or the Thunderbird Classic), which feature spotless craftsmanship and an authentic sound, while being relatively affordable.

While the USA played the leading role in the development of the electric bass, Germany also had something to offer at the start of the beat era. During the Beatles' time in Hamburg in the early 1960's, Paul McCartney selected a Höfner 500/1 as his bass, securing the instrument eternal fame in the history of rock. The Höfner 500/1 became known as the violin bass or Beatle bass, and it is still produced in several varieties to this day.

The 500/1 is an extremely lightweight and handy instrument and features excellent playability due to its medium scale. Unfortunately, German-made originals have become very expensive. Luckily, there are some cost-efficient replicas (some made in Asia under license by Höfner), which can be of excellent quality.

The Epiphone Viola is a comparable model, which also features the distinctive violin shape. Historically, it was introduced even earlier than the Höfner bass. While the Höfner has a curved, solid top, the Viola's top is flat and laminated with a glued veneer. Both models playability and sound are similar, but the Viola has a bit more presence. Price-wise, the Viola is a real bargain!

Beyond the traditional bass makers, many newer companies have secured a share of the market. The development is similar to the world of guitars. There are the far-eastern manufacturers, led by giants Ibanez and Yamaha, which produce good, affordable instruments and have begun to venture into the premium segment. Mexico, Korea and Taiwan are home to the spin-off brands of the big names in the world of basses.

Rickenbacker has a long tradition (even the Beatles played Rickenbacker guitars!). The company became recognised as a maker of basses when bands like Genesis began performing with Rickenbacker basses in the early 70's. Suddenly, many bassists wanted to play these distinctively-sounding instruments. The most popular models were the 4001 and 4003.

The same can be said for Alembic basses. These legendary, hand-made, high-end instruments were made from selected woods and featured intricate electronics, and their sound resonated in the musical world when bass genius Stanley Clarke rose to fame in the 1970's.

High-end basses by companies like Alembic, Ken Smith, Fodera, Ken Lawrence, Spector, Sadowsky, Pedulla, Warwick, Marleaux, Franz Bassguitars, Human Base, Magnus Guitars and others come from small factories and are mostly hand-made. Unfortunately, this level of craftsmanship and quality does tend to come with a rather hefty price tag.