Pickups are an important factor for the tone of an electric bass. Through an electromagnetic field, they convert the vibrations of the strings into electric signals, which are then processed, amplified, and transmitted to our ears through speakers. At the beginning of this chain, the quality of the pickups is a decisive element of a great bass sound.

There are several different types of pickups: 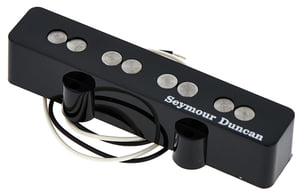 Single coils are pickups in their most simple form. A single coil of wire is wrapped around a magnet inside the enclosure. This type of pickup is used on the Fender Jazz Bass, among others. They deliver a wonderfully airy and open tone, but they are susceptible to interference from computer monitors, stage lighting or fluorescent lights in the rehearsal room. However, the resulting hum is eliminated if two pickups are used concurrently, as it is the case on a Jazz Bass. 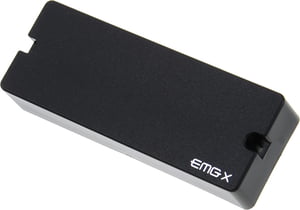 To combat the humming noise associated with single coils, the Humbucker ("hum blocker") pickup was developed. Here, each unit features two coils, one of which is inverted in its phase, effectively eliminating the hum. Humbuckers can for example be found on the Music Man Stingray, which is known for its aggressive, driving sound and its high output level.

Modern basses are often fitted with splittable Humbuckers. This means that a Humbucker can sound like a single coil, which results in a wide variety of available sounds. 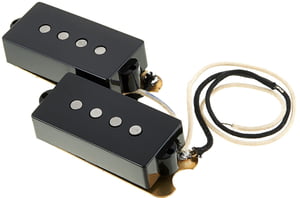 Split coil pickups can for example be found on Precision Basses (P-style basses). The P-style setup consists of two short single coils arranged at an offset, with each pickup covering only two of the four strings. Because the two coils are placed in close proximity, interference is eliminated while preserving the single coil sound. On modern basses, the split coil pickup is often combined with a separate single coil, the so-called PJ setup. The placement of the pickups on the body of the instrument plays a defining role for the sound.

Instead of utilising a magnetic field, the piezo pickup detects the vibrations of the string through piezo-electric ceramics. The electric current is generated from the mechanical pressure of the vibrating string. Since they are not dependent on magnetic fields, piezo pickups work on all string instruments, even those with nylon strings. They are a popular choice for acoustic bass guitars and double basses.