The flag ship of the t.bone large diaphragm microphone series. On the external power supply it has a 9-way polar pattern toggle switch which allows the user to choose between the standard omnidirectional, cardioid and figure 8 (bidirectional) and the particular intermediate stages. The resulting versatility enables almost any recording application.

Thanks to the 24 carat gold-sprayed membrane (1.07) the SCT2000 achieves a very good representation of low frequencies and high sensitivity. The microphone is equipped with a replaceable 12AX7B tube and has very low inherent self-noise compared to other microphones of its kind. Because of its warm sound and its characteristics, the SCT2000 with its vintage technology is a first choice microphone for engineers and solo artist.

So upon doing some research, I found that this mic is actually an OEM of the very 1st version of the sE Electronics Z5600. I have never used any of those mics before, but I figured the sound can't be that far off. I was also told to replace the chinese 12AX7 that it came with to ensure lower noise and better sound quality.

Before we even get to the mic, I feel the need to mention everything it comes with and in. The briefcase it came in was just awesome. Sturdy and just plain cool, however I've had major issues to set the lock code, as the instructions were terribly unclear. The power supply and cables were fine, however I have to caution everyone with the shockmount!
It's reaaaaally poorly cut, i cut my fingers 2ce on the sharp edges as I was screwing it onto a mic stand! You are given some spare bands for the shockmount, which is a nice gesture, but I'd rather see the shockmount be well cut and not needing those.

On to the mic itself. It comes in a wooden case that weighs nothing, and would not protect the mic from anything. The mic itself felt like it was going to fall apart when I was pulling it out, as the metal casing is really really shitty. After replacing the tube, I plugged the mic into it's power supply, let it warm up for about 10 minutes, plugged that into into a Warm Audio WA273 into a 1176 clone and went to town.

Looking beyond the shady worksmanship, the sound of the mic was honestly super impressive. The rich bottom end, creamy mids and super crisp clear and sharp top end really let you hear the intimacies of any voice.
I put up the mic next to my Warm Audio WA87 and while the mics are very different, for many voices, I'll be reaching for the SCT2000 quite a bit!

But for real thomann, that shockmount needs work. I'll be needing industrial gloves when I handle that thing.
Helpful · Not helpful · Report
Report rating…

Send report
features sound quality
Very good
03.02.2016
Sounds great! Great service from Thomann.
Update 06.05.16: I still think the mic sounds good! BUT...........a big problem......... ! One year ago exactly after I?d owned it for a year, I started getting terrible hiss! I ended up using another mic for the recording! I hadn?t thought about it again until I went to use it last week! The same thing happened!! When I changed the patterns it sounded like thunder!?? After I?d pulled the mic plug out and replaced it back in the power box a few times everything worked well again! I will be contacting Thomann about this!
I just want to say that this has nothing to do with the fantastic service from Thomann when ordering!
Update 06.05.16: I called Thomann and they immediately offered to replace it! I will return the defect mic on Monday!
Very friendly and efficient service, I look forward to a good sounding working mic! Thank you Thomann!
Update! Mic back within one week, working and sounding great! Thank you Thomann! Great service!
Helpful · Not helpful · Report
Report rating…

Send report
features sound quality
Great mic
JCBurnett, 16.08.2017
Using this mic in the studio for basically anything. The sound is crisp and clear. Great tube tone. The top end is very nice.
You can make great use of the different polar patterns as well as fine tune with the in-between positions.
Build quality is very nice, heavy and sturdy. With proper care and professional usage I think this mic can last for a long time.
Helpful · Not helpful · Report
Report rating…

Send report
features sound quality
One of the best
grig.dorin, 16.05.2018
One of the best studio microphone you can get at this price.
I bought it 2 years ago an I am still using it wuth a Tascam voice processor. Sounds great!

I recommend it.
Helpful · Not helpful · Report
Report rating…

Large Diaphragm Microphones
They pick up any sound! In this guide, we have tracked down the most popular condenser microphones for you.
Free downloads 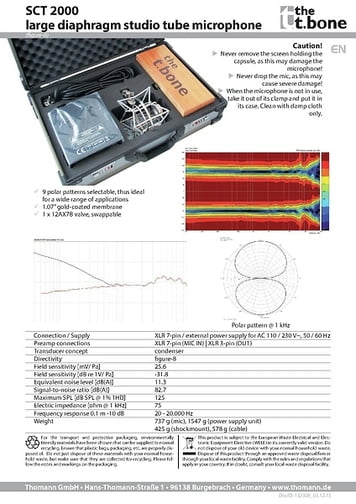 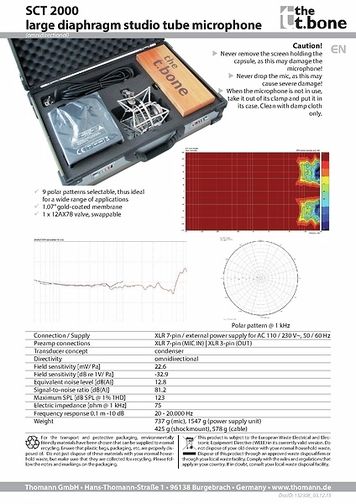 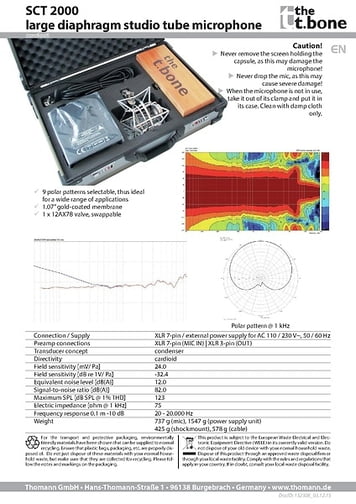 Show all
Large Diaphragm Microphones
They pick up any sound! In this guide, we have tracked down the most popular condenser microphones for you. 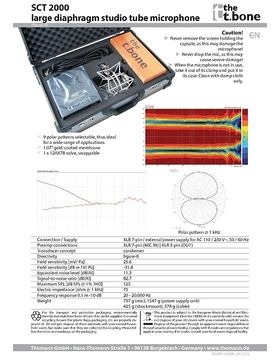 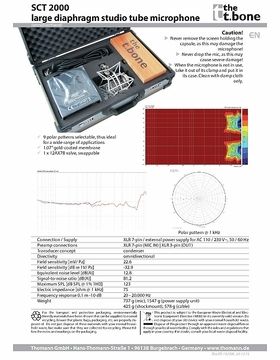