Zpracování Vlastnosti Ovládání Zvuk
Its a very decent product for the price
jkak72, 11.01.2021
Like just about everything Behringer makes at this price point, the UMC22 is chiefly one thing: cost-effective. You don't get best-in-class sound quality. You don't get a flashy brand name. You don't get the most features. What you do get is an audio interface that works, and honestly does a surprisingly good job. Setup is easy. Plug it into your computer. USB2 is fine. Plug in your headphones. Plug in your monitors. Plug in your mics/instruments. Done. Drivers aren't obscure or finicky. Don't worry about it. Outputs in the rear need two 1/4" TR cables for left and right channel. Output in the front needs a 1/4" TRS cable. Make sure you've got semi-decent studio headphones and/or monitors, too - an audio setup is only as strong as its weakest link, and if you're looking up 1/4" adapters for your Beats or whatever, maybe skip this and invest in better headphones instead. Craftsmanship's okay. It's a Behringer audio interface, not an SM-58. I wouldn't go throwing it down flights of stairs for fun. You have two audio inputs - the XLR/TRS hybrid jack going through the Midas preamp, and the second TRS jack that goes through a Xenyx preamp. Neither are particularly touted for their sound quality (the Midas is better than the Xenyx by far, though), but it's miles above motherboard-integrated stuff. Both can record at 48KHz tops - as far as I'm concerned, if you're looking at this interface instead of something higher-end, that's plenty. The "direct monitor" button you see on the front ducks your computer sound output and lets you listen to your connected inputs through the hardware, which has its uses. The interface outputs to headphones and to external monitors by means of 1/4" TRS and TR cables, respectively. Sound is clean - mind you, my ears aren't well trained to that sort of thing, and if yours aren't either then the sound quality should be fine. It's important to note that it will always output to both headphones and monitors - if you want to listen to just headphones or just monitors on-the-fly, this won't provide a convenient solution to that. It does, however, eliminate the need to go through your OS's sound system, which can be useful when working with ASIO or CoreAudio exclusive modes to reduce latency. If you want the best and have the money to back up your needs, consider looking elsewhere. Again - an audio setup is only as strong as its weakest link. But if you want the pretty solid, and you're on the kind of budget that has you saving up for purchases like these, I think you can't go wrong with the UMC22, or the U-PHORIA series in general. TL DR: It's cheap. It's fine. If you need it, get it
Pomohlo mi · Nepomohlo mi · Ohlásit hodnocení
Ohlásit hodnocení...

Zpracování Vlastnosti Ovládání Zvuk
Well made design, but many problems with the drivers and hardware
JustinasK, 03.04.2019
PROS: I love that its made from metal, feels very good in your hands and provides a sense of confidence. XLR mount is very stable and the knobs feel secure and rigid. Features give yout everything for small studio work. 10 points for design and overal exterior build. Thats all for the PROS.

That said, I think it could still be usable for beginners and you could get good results from the interface on the condition that you got a working unit (with no noise issues). Also, I should note that UMC22 is better to be used with MAC and not WIN systems, because of the serious driver issues (lack of them) with WIN10.
Pomohlo mi · Nepomohlo mi · Ohlásit hodnocení
Ohlásit hodnocení...

Zpracování Vlastnosti Ovládání Zvuk
Horrible unwanted noise at 3.15kHz, rendering it useless to me
victoryoverall, 06.04.2020
From the moment I received my UMC22 three months ago it produced a whistling noise at around 3.15kHz (a super visible spike can even be seen when using any simple EQ spectral analyser) which when amplified by any high gain virtual pedals/amps turned into a horrible screech. I spent a lot of time and effort troubleshooting the problem, to ensure it wasn't caused by external interference, including and not limited to the following:

- Trying a different computer
- Trying on a laptop connected to mains power and on battery power
- Using a laptop away from my house (outside and in my car)
- Using different plugs
- Guitar plugged either input
- No instrument plugged in at all
- Phantom power both on and off
- No other peripherals connected
- Connecting the UMC22 to each USB port and through a high quality powered USB hub
- Etc...

When I ran out of things to try I sent the unit back for repair, making sure it was carefully packed. Thomann's repair centre eventually found no fault, sent it back in a poorly packed box which meant it arrived with cosmetic damage, and after all that it turns out the noise is still there.

If they discovered no fault then I figure that this issue is inherent to the UMC22. Aside from this the product is physically well made, has all the features a simple USB audio interface would need, and was super simple to set up on Mac. It's just a shame that this problem renders it completely useless for me, ruining any high gain guitar tone with its constant screeching noise. 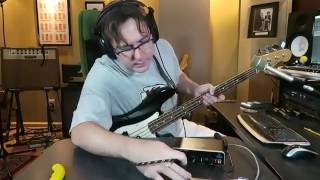 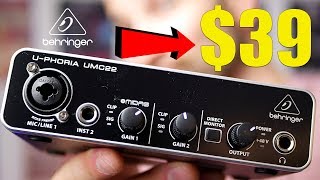 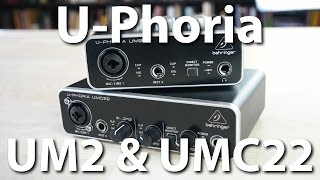