Zpracování Vlastnosti Ovládání Zvuk
Impressive for the price!
TrEr, 29.05.2017
I got this interface for using at home on days when my studio is busy with other projects. Just to be able to do some recordings at home, for fun, but it turned out to be much better than expected and has also been used for serious work.

Lets get the bad stuff out of the way first:

-Pots have started crackling after just a few months use. Very disappointing!

-Jack line inputs/outputs feel VERY fragile. Especially the outputs on the back. So far they work fine but this is the kind of quality you just KNOW is going to break. I'm surprised they haven't used better connectors. The headphone and XLR connectors feels ok though,

-After using the interface for a couple of months I started having some trouble with losing connection to the laptop/DAW. It just suddenly was "disconnected" in the middle of a session. It happens very sporadically, perhaps once every 10 hours of use. Still very annoying. I guess I can live with it for home use but it completely rules out any professional applications. If this continues I will have to consider returning the Behringer for repacement/repair but I want to test it with another laptop/DAW first to make sure the problem is not elsewhere in my setup. It does seem very much like the problem is with the Behringer though as I've never had these problems before with the same laptop/DAW.

-I wish there were two headphone outputs. Obviously not a problem when I work alone but there are situations when two headphone outputs would have been nice. Using a splitter to connect two headphones did not work very well. The output could not handle it, causing distortion. I guess you can't have everything at this price/size so not a huge issue I guess.

Ok, so the good stuff:

-Sound. Based on sound quality I can easily use this for serious projects. My intention was to get the Behringer just for fun but more and more often I find myself using it to do overdubs for serious projects. I honestly can't tell any difference in sound quality to comparable recordings I do in my studio on RME/SSL interface/converters. I should add that I don't normally use the internal Midas micpres in the Behringer. I have brought home a small rack of gear that wasn't used in my studio. Cheaper stuff like Warm Audio, FMR, Toft etc. And I have to say: The difference between this gear and the more expensive outboard gear in my actual studio is a LOT greater than the difference between the cheap Behringer and my studio's more expensive interface/converters. I should also add that the Midas preamps in the Behringer are totally fine, just a bit characterless for my taste so I prefer to use outboard transformer based preamps if possible. Still, the Midas preamps are definitely not useless like the Behringer preamps of the past. For example, these Midas preamp are FAR superior to the preamps in the ADA8000. I might also add that I absolutely LOVE the fact that Behringer has included inserts on this cheap little interface. This means it's possible to use outboard compression/eq even when using the internal Midas preamps which is a HUGE improvement compared to many other cheap interfaces.

-Size. This was important to me. It fits nicely in a backpack together with a laptop so I can go anywhere (provided there's electricity...) and work on my music.

-Stability... Well, like I mentioned I've had some problems with the Behringer suddenly becoming "disconnected". I'm still not 100% sure if this is a fault with the Behringer or something else in my system (although everything points at the Behringer). But apart from these incidents it has been VERY stable and running efficiently at acceptably low latencies/buffer settings. I'd say the laptop it is connected to is far more likely to be the limiting factor for efficiency.

-Zero latency monitoring. While there is no fancy on-screen mixer it still works really well with a single knob adjusting smoothly between monitoring playback or incoming signal. Great, simple solution that just WORKS.

So, what's the verdict?

I guess the long term reliability will decide whether this is a good investment or not. There are signs that the build quality isn't the best but it sounds VERY good and is VERY cheap.

I'm generally not a fan of recommending stuff that's poorly built but in this case I'm making an exception. I really feel Behringer has pushed the limits of what is possible at this price point. I might eat my words if my unit breaks down in a years or two but still: 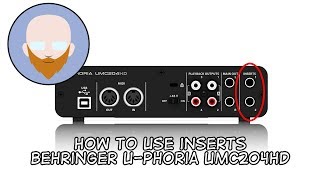