It has a connector converter from 6.3 mm to 3.5 mm which is nice. It has plenty of volume.

It doesn' sound throught the overhead mics when you record.
If you're on a budget like me and you want something good to record at home get this superlus hd 662 f
Behulpzaam · Niet behulpzaam · Evaluatie melden
Rapporteer een evaluatie…

geluid draagcomfort afwerking
Great if you're on a budget
Konstantinos A., 05.12.2018
If you want a pair of closed back headphones that are relatively flat and you're on a budget, then these are probably for you.
I use them in my studio for tracking everything, including drums, and they are great for that because they fill almost all the boxes for that use. They got good isolation, can get quite loud, the sound isn't too colored so you can hear what you're playing, and all that while being cheap so you don't have to worry too much about musicians throwing them around. In fact I plan to get a couple more pairs soon for the same purpose.
For comparison's sake, I used the t.bone HD990D before these and while they had good isolation and they're still working fine after many years of use, they were definitely coloring the sound a lot and sometimes I had to do EQ adjustments to get a better picture of what was being captured. I also own a pair of AKG 271 mkII from which Superlux seems to have copied the design. In comparison the AKGs are closer to the monitor sound (flatter) and are certainly more comfortable. They also have easily swapable cables which is a plus, but they also cost about 3-4 times the price (they've gotten much cheaper since I got them). One thing the Superlux have that the AKGs don't and it was kinda impressive, is very rich bass. I'm not talking about the crappy overwhelming super hyped bass you hear from many consumer type headphones, but actual rich bass. They might not be totally flat in the lower frequencies as I feel they are bumping the lows a bit, but you don't have any particular resonant frequencies striking out that would make them unusable. Truth is that I keep these around to check my mixes whenever I am mixing something particularly bass heavy, because they give me more info on what's happening down there in comparison to both the AKGs and my monitors. If you've got the money, the AKGs are a good investment, but if you can't afford pricier heaphones, or just need some extra pairs around for monitoring/tracking purposes like me, go for the Superlux.
On the downside, I would say that comfort is a bit of an issue because they will feel quite tight when you put them on your head. My head is above average in size so there's that, but I never had a problem with the AKGs or the t.bone in that matter. It's not a huge deal, but if you plan on wearing these for very long periods of time, they won't feel totally comfortable. On the other hand, after some hours of use I feel they aren't as tight as when I got them, but I have no way to measure that.
I would also say that the build quality is ok, but I feel like the plastic is kinda cheap and I'm not entirely sure it will hold up for years to come. I have to say though that someone already through them on the floor in frustration at some point and they didn't even get a scratch, so I may be wrong. 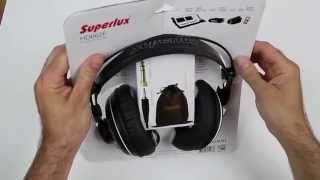 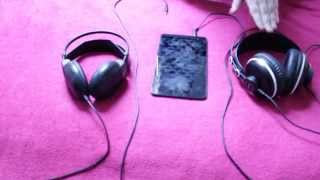