tulajdonsagok hangzás kivitelezés kezelés
For a £20-something pedal, it's pretty damn impressive
SamF, 05.06.2015
I didn't plan on buying this pedal, truthfully, I was hoping to one day get some kind of overdrive pedal (maybe a Maxon OD808) as a booster for my amp to record hard rock/metal guitar tracks for my own music.

I was shopping for some stuff on thomann and I came across this pedal, looked like a clone of the Maxon OD808 (sounded pretty close to one too), it was nice & cheap, and after looking at some reviews and demos of this pedal on YouTube and so on, I liked what I heard, and decided to throw it into the shopping cart. It seemed like an absolute steal considering how it sounded and how much it costs, and even if it didn't sound all that great, it wouldn't have been much of a loss.

After unboxing it and sticking in a 9v battery I tested this thing out on my valve amp, on a high gain setting of course
m
and I must say, I was really impressed with the sound of this pedal, it gave my amp a more tight and articulated sound, much better than how my amp sounds with no overdrive pedal to assist the tone. It does give a good 'tube-like' sound to your amp whether you're using it on a clean or a distorted setting, and you can use it for a light crunch or a full on overdrive.

In terms of build quality it feels pretty solid, all contained in a little green metal box, the knobs feel nice and sturdy, don't feel like they're gonna just fall off or anything. Could probably take a good stomping before it starts wearing down. I don't know how it'll fair in a live scenario, I've only been using this pedal for recording purposes, if you do takes this pedal out to gigs, do so at your own risk.

It's easy to work the controls on this pedal too, nothing complicated about it at all. Pretty much has the controls you'd expect from your average overdrive pedal. Similar to the OD808 it has a drive, tone and volume function, doesn't take a genius to figure out what those do.

Now, there are other pedals that are 'technically' better than this one, and may be more favourable than this one, but that does not mean it's no good, this pedal does hold it's ground against it's more expensive competitors. And for the price you absolutely cannot go wrong with this, for a £/?20-something pedal, it's pretty damn impressive.

If you have a little money to spend on a cheap but great sounding overdrive pedal, take a serious look into one of these.
Hasznos · Nem hasznos · Jelentem!
Értékelés jelentése...

tulajdonsagok hangzás kivitelezés kezelés
Very nice clone of Tubescreamer for 20 euro
Ivan Orlov, 04.01.2020
It is nicely done, looks quality made and all the pots smoothly running. I bought that in order to boost my tube amp and it does the job nicely. As i use that with high gain only i can only tell that it works fine to give an extra punch to the amp but did not explore that with clean channel too much. My settings are: Drive - 9 o'clock, volume - maximum, tone - 12 o'clock (slightly vary on the guitar i use)

So, it is good clone of TS808/TS9 and definitely value for money!
Hasznos · Nem hasznos · Jelentem!
Értékelés jelentése...

tulajdonsagok hangzás kivitelezés kezelés
I'm happy!
JBM71 , 22.06.2021
Ok.......so it's not an original Tubescreamer........but it does an admirable job in my opinion.
Use: I use it for anything from Classic Rock'n'Roll / Rockabilly through to 60s and 70s Classic Rock tones.

Pro's: In my opinion, sounds good and does exactly what I need it to. Admirable representation of a much more expensive pedal. You can't beat this price.

Cons: Not at this price and no problems so far!

Yes, I am a Harley Benton and Thomann fan. And that's because I have been happy with everything I have purchased from them - Good prices, good value, good products.
Hasznos · Nem hasznos · Jelentem!
Értékelés jelentése...

It's as good as any other "green overdrive" I've ever tried.

Metal housing, slightly roughly cut on the bottom but still great, phenomenal sound. good quality knobs. What a treat of a pedal at a steal of a price!
Hasznos · Nem hasznos · Jelentem!
Értékelés jelentése...

Distortion Effect Pedals
A classic Ibanez Tubescreamer or Colorsound Tonebender can fetch many times its original price from guitarists in search of the ultimate killer tone and sustain.
Ingyenesen hozzáférhető 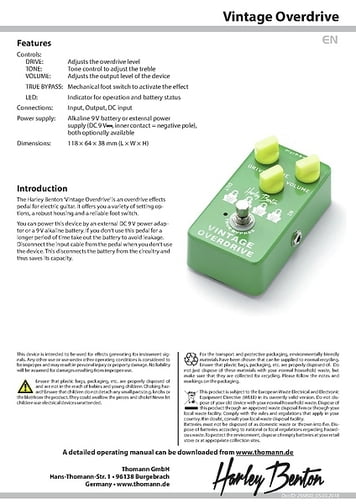 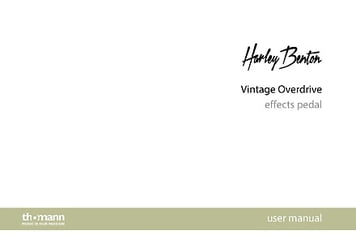