kezelés tulajdonsagok hangzás kivitelezés
You gotta be kidding me
Head of Vecna, 15.04.2021
For the price this thing cannot be beat.
It's a great little amp for bedroom practice, practice with your band, and I think it can handle small gigs no problem, if there was any gigs these days, you know. It handles playing with a drummer no sweat. It's feature packed to the brim, it's cheap, it sounds great, it looks cool, it's small and easy to carry - what else do you want it to do, make coffee for you?

Enough of that, though. There's enough praise being sung to this amp, so I'll concentrate on the negatives instead.

- First, the build quality begs the question of whether or not this thing can handle the live work. That tiny power transformer can barely manage the load and gets really hot really fast, all that heat coupled with the heat off the tubes cooks the PCB and its SMD components. So far so good though.
- The power tubes are biased cold, or so I've heard, and I'm not sure that I'm allowed to open the guts and set it right with the bias pot without losing the warranty.
- The stock speaker leaves a lot to be desired. There's this harsh top end to it, which cannot be EQed out by the tonestack. But throwing a, say, used Greenback in would improve the sound drastically.
- A few days ago the amp began to oscillate, I've swapped V3 for V1 and vice versa, and it's fine again. Guess the noname V1 tube has gone bad in two months of use, but it pulls the phase inverter duty well enough for now. That helped with the hum, too, there's less of it now. Looks like I'm buying new 12AX7s. The power tubes are Russian-made 6p14p, no complaints here.
- The reverb wire goes through the hole in the chassis without a grommet, the edges of that hole are sharp and can cut into the insulation. That's easy enough to fix tho.
- The power cable is very short, a meter or so in length, and if you want to swap it for another, it's time to reach for your soldering iron. Guess these IEC C14 sockets cost a fortune. Still, it's a very minor issue, trivial to get around.
- There's no standby switch. Big deal.

I think I've covered everything negative that I know about this amp. And there's not that much of it, especially considering the amount of positives to it. A good buy, this amp rocks.
Hasznos · Nem hasznos · Jelentem!
Értékelés jelentése...

kezelés tulajdonsagok hangzás kivitelezés
Excellent Performer
Mountainhop, 09.09.2020
First I ordered a B-stock TUBE15, but alas on the way here it was heavily damaged during transport. Thomann however attended and fixed this problem correctly, so a few days later I received a beautiful new amp, nicely packed two times, and the bounced one was picked up direcly. Nice work Thomann Freunde!!

For this kind of money, building a 12 inch A-quality Seventy 80 Britpop speaker in an almost perfectly refined multiple tube combo, including a spring reverb?

Someone either made a calculation mistake or certainly knows his way around the world how to make a good deal come to us, being the happy customer.

The knobs do their good work, especially the extra Tone possibily is a brilliant feature to get your setting right plugging in various guitars with various pickups, from a Danelectro 59 NOS, a Jimi 69 strat, a Micawber Tele, a Fender FMT, and a very fat Gibson SG, they all sound great on this convincing whitish tube amp with the black front panel and his red eye.

Also my pedalboard works fabulous on the send and return connections in the back of this rather light combo contraption, our beneficiary must have been saving a few coins there, for a 12 inch combo with a very loud mouth in the lowest price range that is.
For loud she certainly is, and also sharp like a razor.
I read on the internet in a Sweetwater review on the Seventy 80 speaker that he considered way too sharp, but in my humble opinion that is the whole purpose of a good amp. If you buy a Mesa Boogie combo e.g., which b.t.w.costs tenfold this one here, you will find that the Mesa Boys are putting all their knowlegde & effort in their products to especially pump the clearest and sharpest tone thinkable out of their amps, as compact and as loud as they can achieve.

Get one while you can!
Great work you Harley Benton & Thomann guys!

Don’t miss the beautiful review on YouTube that Dave Simpson made for us all on this amp.....AMAZING!

Thanks for reading, I’m off to my Tuby Tuesday to play...
Hasznos · Nem hasznos · Jelentem!
Értékelés jelentése...

kezelés tulajdonsagok hangzás kivitelezés
Definitely a keeper!
Mike.s, 17.10.2020
This was probably the quickest a new amp has grown on me, the quality of tone this produces is unbelievably good.

For me there is little in how an amp looks, or how much it cost, only what noise it makes when you use it, this got my seal of approval within a couple of notes.

I have been a solid state amp user for decades, though I have recently been noticing how instruments all sound the same through modern amps, even the amps all sound the same, I think we have all been there with new amps; dozens of preset tones, none of which exactly get the tone you are looking for, so we spend hours fiddling with knobs, playing the same riff, fiddling with more knobs etc.
Then I bumped into this and got thinking that maybe a valve amp is the way forward. I did a little research on the topic, watched a few online demos of top end ones and ended up deciding to give the budget option a try.

Being my first all valve amp i am not really qualified to judge this amp against others in its league but as far as I am concerned it ticks all the boxes.

I opted for the 15w model on the grounds of having reverb and independent gain control, features which i felt i would regret not having...and I was quite right in that assumption.

This amp has enough features to be versatile yet simple to use, i set the eq flat when I got it and have yet to need to alter it, I think that says it all really.

Playing everything from my US strat, Harley Benton cheap guitars and proper vintage American guitars this baby delivers the goods in style and is addictive. I thought my strat was starting to sound rubbish, but it was clearly my amp as plugged into this it growls and purrs with overtones of pure vintage goodness. It made every instrument sound unique too, I could tell by listening what was being played.

In conclusion this is my best purchase in years, and I am not just blowing smoke, this amp is a piece of kit I don't want to be without.
Hasznos · Nem hasznos · Jelentem!
Értékelés jelentése...

kezelés tulajdonsagok hangzás kivitelezés
A very nice surprise
granny, 22.03.2021
I was ready to pull the trigger on a asian made, brand name dual channel 20W tube amp (that i previously owned once) for twice the money and switched at the last moment for this one. I gambled.. and (so far) I won. I find the Celestion 80 speaker in this amp way better than I found it to be in other budget amps and I cannot say yet why.. might be the tubes (mine came with TAD power tubes and chinese preamp tubes - later ones I changed with JJ's) or the amp itself but the speaker doesn't have the harshness and the piercing highs I used to hear in other amps. The amp looks great and doesn't have any estetic flaws (has similar build quality with other bigger brand asian made amps). The 1W setting is very usable at a livingroom level and you can get decent distorted tone but you'll have to make some noise for it - nothing beats headphones for a very quiet practice. The 15W mode on the other hand is awsome for giging or band practice and will compete with an acoustic drum set just fine. The tone with the knobs at noon is decent using a stratocaster, but a bit faded (no high sparkle) and lacks a bit of presence, but you can dial up to a certain point your tone using the knobs. For further tone dial options I recommend an eq pedal last in the fx loop section witch will eliminate any need of speaker upgrade - again, I cannot belive i am prasing a speaker that I have replaced 2-3 times before in other amps. With the gain turned past 12 o'clock and Volume about the same, the amp has a very natural fat and creamy distorsion on the strat bridge pickup that can satisfy all classic rock and blues fans out there. The reverb is organic and true to its nature and even though one migh ask for a deeper setting I never found the need to turn it past 12 o'clock.

This amp has amazing value and I recommend it to people who need good giging tone and dynamics on a decent pedal platform that you can use both home and on stage. The fact that you get amazing tone by only pluggind the guitar and dial its knobs is proof that this amp deservers some consideration.
Hasznos · Nem hasznos · Jelentem!
Értékelés jelentése...

Guitar Setups
The range of available guitars and amps has never been greater than it is today, and a huge variety of sounds are easily accessible.
Ingyenesen hozzáférhető 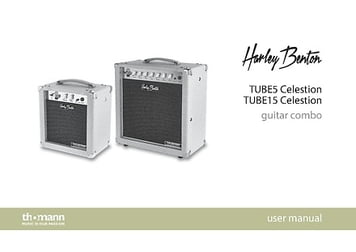