The I-5 has been designed to meet the needs of users and retailers for a universal, high-quality and cost-effective instrument microphone. In recent years, Audix has successfully produced a wide range of application-specific microphones for e.g. Drums and percussion produced. I-5 is a synthesis of the experiences of these developments. Audix is the leading U.S. Manufacturer of high quality microphones for the event and studio market.

Although the I-5 is manufactured in large numbers for a broad audience, the high quality specifications and quality control standards, as with all other products, are retained as trademarks of Audix.

The I-5 is designed with a cardioid polar pattern that allows the microphone to be transmitted to the stage without crosstalk from other instruments or sounds. With a smooth, even frequency response of 50 Hz - 16 kHz and the sound pressure processing of more than 140 dB, the I-5 is an all purpose microphone suitable for all musical styles.

Each model with the current Audix instrument microphone technology is made of durable cast zinc alloy in a slim housing with a unique basket design and laser-etched model and serial number.

Ominaisuudet Ääni Työnjälki
A Great All-Rounder!
22.02.2016
I have been a fan of Shure SM57s all my musical life (33 years). However, around two years ago, a soundman at church (who often does sound for my band) put me on to the Audix i-5; I worked with him one night and heard it for myself on snare. A few weeks later, I acquired a second hand example; now here's the surprise....

I bought my first Audix i-5 for use on snare and guitar cabinet, mainly as an alternative to my SM57s; but then one night, at a rehearsal, I set it up to sing through. My band does a fair bit of rock and I use my pharyngeal range almost exclusively. Using that system requires one to "compress" his voice, which I find pulls back the volume a little; but by using a "close-capsule" microphone (like the SM57) the singer can engage closer to the diaphragm; when I discovered this, I stopped using SM58s. When using the Audix as a vocal microphone, the "popping" problem, caused by proximity, can be avoided simply by high-passing the vocal somewhere in the 80 Hz region, maybe 100 Hz. Now, in this band, I use this microphone all of the time. I have occasionally switched to a '57 because the results are similar, but I find the Audix is more forgiving if I move off-axis.

So what about the comparison between the Audix and the Shure?

Many people have written about which they prefer and I think it's a pointless discussion. Both mics are great mics in the studio or for live. I think the Shure is the benchmark; and if we think of it that way, then the Audix has a gentle scoop when one A-Bs the two mics. Personally I like both mics and I wouldn't want to be without either type. After owning my first i-5 for a couple of months, I bought a brand-new one from Thomann, with some vouchers I needed to spend.

This weekend I recorded a vocalist and we did a text-book microphone shootout to find out which mic he should use for his lead vocal. We eventually plumped for a Rode condenser but the Audix wasn't far behind and it would have turned in a great result if it were the only mic available. That's quite amazing, since it's not considered a vocal mic for the studio by many people.

If you need an all-rounder, that's built to last a lifetime and you want an extra flavour on top of a '57, buy yourself an Audix i-5, you will not regret it; and rock vocalists might be in for an extra surprise. This would be a great starter mic for anyone into home recording because it will do everything.

Recording E-Guitars
Our aim is to explain the basic process of recording the electric guitar!
ilmainen lataus 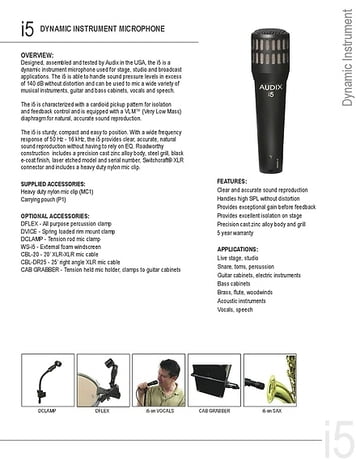 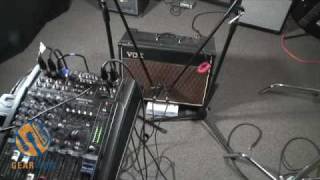 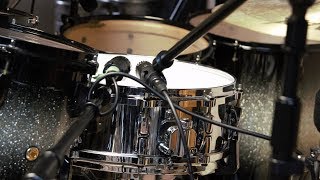 Näytä kaikki
Drum Mics
Miking up and recording a drum kit is a fairly complicated procedure, and this can apply equally to choosing the right mics for the job.
Näytä kaikki
User manual
PDF
testitulokset:
Lue arvostelu