Vlastnosti Zvuk Zpracování
The only reason I can think so many people like it is because of the power
Adny, 19.01.2020
Has introduced humming and buzzing and random pops into my monitoring system, even with fully shielded and balanced connections. Not good.

The crossover is apalling. It's not a crossover, it's just a low-pass filter. If you pass your monitors through it you'll lose everything under about 180Hz in them, regardless of where the crossover is set and you have no option to change it. So then the only option you're left with to recover those lost frequencies is to have them through the sub. My speakers sound fine down to around 80Hz and are very very good, so now I have to sacrifice most of the bottom end in order to get the lows I was initially after. And the 80 - 180 Hz range on it is just too much.

You either have to..

The volume knob is completely useless, it's like the stereotypical hot and cold shower controls, 1mm to the left and you get nothing, 1mm to the right and it's drowned everything else out, then doesn't appear to do much for the rest of the 300 degrees.

If your monitors have a low frequency cut off oif their own then you MIGHT be able to get away running them straight through, daisy chainging through the inputs and effectively running the system in paralel rather than series, but this is far too agressive to be useful to most setups.

Don't waste your money, go for something with less grunt and more control. The features and performance of this product lead me to think it's more suitable to home theaters than in a studio, and should not be advertised as such.
Pomohlo mi · Nepomohlo mi · Ohlásit hodnocení
Ohlásit hodnocení...

Vlastnosti Zvuk Zpracování
Very decent for the price
Tavi94, 03.04.2019
I have been using this sub with a pair of JBL LSR305p and overall I was very pleased with it for the price.

Here are my thoughts:
PROs:
- Extends down enough to make music a lot more enjoyable.
- Has plenty of power to work with
- Fair accuracy for the price
- For the price, you can't get a better sub in terms of power/ frequency extension

CONs:
- Very big and extremely heavy, it really is a huge monster make no mistake
- Crossover knob is cool but it doesn't cut the freq just right, you will hear the crossover struggling for sure
- Unbalanced inputs would have been something really useful, one of the TRS inputs on the back was loose, but still worked with a bit of fiddling
- Big sound pop when the sub comes ON
- Gets pretty hot after few hours of listening

Vlastnosti Zvuk Zpracování
I'm satisfied!
Chuchers, 05.05.2017
After week of using this sub, I'm pretty satisfied!
This thing has huge amount of power, although you will probably not use quarter of it (in order to match the levels to my Yamaha HS50m, I'm having this thing at about 15%, with crossover at about 60hz).

Bass response is very quick and price, no rumbling (when level-matched), this sub generates very deep but precise sound.

I was pretty stoked about the finish of this thing - I was expecting some cheap abs, while this thing is build exactly as good as Yamaha's HS series.

The 'power saving' function is indeed poorly designed - there are some audible clicks in your main monitors when 'waking up' the sub, however I find this really not very annoying.

If you want to actually know what is happening with your mix in the low freq, this is the best solution for the money.

The I/O and controls leave nothing to be desired in 90% of cases.

The build is solid and there is no hum/rattle/port 'chuffing' on my unit, all of which can be relatively common issues on entry-level subs.

The sub can move enough air to fill a large room with sound of great quality for the price.

Overall - of course there will be better subs out there, but I genuinely doubt you'll find many - if any - at this price.

The reason for the 3 star quality rating, you ask?
It died.

It gave me four good years but eventually decided it didn't want to make sound any longer. It would come out of standy when given a signal but the driver would not move. Sad times indeed, but I feel I got my value from it all the same, and would still recommend the unit to anybody looking for an entry-level sub capable of relieving your smaller monitors of their low-end duties while gaining an octave or so.
Pomohlo mi · Nepomohlo mi · Ohlásit hodnocení
Ohlásit hodnocení...

Monitor Speakers
In this guide well outline the basic principles of studio monitors, and take a closer look at their most common features.
Download 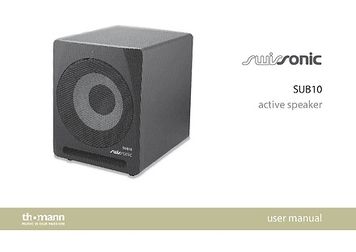