tulajdonsagok hangzás kivitelezés kezelés
Chainsaw
Midnight Walker, 25.03.2020
We all know what this is. An original HM-2 might be great, but the insane prices you find even for heavily used ones are not worth it when you have so many boutique options. Thankfully we have dirt cheap ones too. The Eyemaster is a very fun pedal if you like the 90's Swedish Death Metal sound. It comes very close to the original HM-2 and does the same job just as well. Boosting it with an eq after it makes it more visceral sounding. It may be a one trick pony, but with a little imagination it can be used for other genres like doom, stoner, even black metal as well. Sometimes I miss the eq knobs when I'm not trying to get a Chainsaw sound, that could greatly add to its value. And it's built like a tank.
Hasznos · Nem hasznos · Jelentem!
Értékelés jelentése...

tulajdonsagok hangzás kivitelezés kezelés
The classic "Buzzsaw" guitar sound for a fraction of the cost
P-Mac, 21.12.2018
Do you want to get that bone crushing Entombed/Dismember guitar sound? Do you think that spending 3 digits on a vintage Boss HM-2 (or one of those boutique clones out there) is too much? Are you afraid that the Behringer HM300 isn't sturdy enough? Well, you're in luck, my dudes and dudettes.

The Eyemaster promises to deliver that fat and HEAVY early 90's Swedish Death Metal guitar sound, and boy... it delivers. It's built like a tank, looks great and sounds nasty (in a good way)! So, if you are looking to get THAT guitar tone, and want an affordable but sturdy alternative to the classic HM-2, look no further.

Tip: Don't max out the gain, as advertised on countless HM-2 videos. It works best (to my ears, at least) in front of an already dirty amp; use it almost like a boost/EQ.
Hasznos · Nem hasznos · Jelentem!
Értékelés jelentése...

tulajdonsagok hangzás kivitelezés kezelés
a one trick pony, but a fun one! (not really an HM-2, tough)
dheim, 23.10.2019
the Eyemaster is basically ALMOST a clone of the good (or awful, depending of whom you ask) old Boss HM-2.

universally despised as a "proper" distortion pedal, yet a cult object among the fans of classic swedish death metal, the HM-2 with all controls to max is the (well known) "secret" for the patented "buzzsaw" guitar tone of early Entombed, Dismember and various bands of the glorious years between the end of the 80s and the beginning of the 90s...

since noone uses the HM-2 nowadays, except to get THAT tone, and the original HM-2 is becoming growingly difficult to get hold of, TC electronic solved the problem in the most brutally efficient way: no EQ controls (you've got to dime them anyway, so...), just a couple of big, round knobs for gain and volume. and a weird silent switch that engages the effect when released, rather than when pushed.

my votes, explained:
features 3/5. it does ONE thing, actually. i couldn't give it more, in all honesty.
handling: 3/5. it's flatter than a Boss pedal, but a bit larger. i'm not really sure about the internal circuitry, but i bet it could have been built as large as a TC mini pedal
sound: 4/5. it sounds more or less like an HM-2, and it's easier and friendlier to use than the original to shape an already distorted amp (that's not the way it's OFFICIALLY supposed to work, but i suspect it's how many guitarists got their "Stockholm" tone in later, more refined productions), BUT the HM-2 is badder. period.

if you can't find a proper HM-2 (or if you want a pedal that's easier to control to get a hybrid distortion) the Eyemaster is fun, cheap and effective. and has true bypass.
if you want THAT buzzsaw tone and not something that just comes close, the HM-2 is the only real way to get it.
Hasznos · Nem hasznos · Jelentem!
Értékelés jelentése...

tulajdonsagok hangzás kivitelezés kezelés
Wolverine Blues in a box!
ThrashXT, 06.01.2020
Well, you know what are you reading a review for... It's a dimed HM-2 clone. If you wanted a versatile distortion pedal - look the other way! This thing simply rapes your ears. It is a nasty, fuzzy, sludgy, in your face tone known by 90's Swedish Death Metal Scene.
Pros:
1) Incredibly cheap price!
2) Easy controls (Volume & Gain), EQ comes dimed from the factory...
3) Stylish and sturdy construction
4) 9v@100Mah (unlike original)
5) Designed after Wolverine Blues album art
Cons:
1) Fake 3PDT knob, which lead to...
2) Turns on after the knob is released (not then pressed)
Hasznos · Nem hasznos · Jelentem!
Értékelés jelentése... 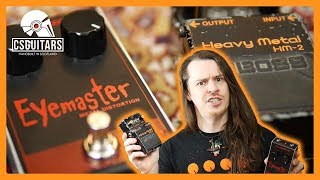 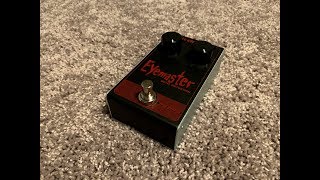