The Strat, Marshal towers, fuzz and wah wah pedals have always been connected immediately and naturally with the legend Jimi Hendrix. Another element that the guitar master repeatedly used is the Tycobrahe Octavia, the first octaver, which was developed by FX mastermind Roger Mayer for Jimi. Fulltone has revived exactly that sound with the Octafuzz OF-2, as usual with the finest components and high-quality production.

To call it an octaver would be to only name half of its components - a fuzz is also on board, and it can be operated alone on the Fulltone thanks to a small toggle switch, which of course makes the device more often usable.

With certain settings the pedal can even sound like a ring modulator, which can be quite interesting. Retro, but at the same time something quite adventurous and made for experimentation!

I'm not the biggest fan of the fuzz setting (without the octave effect) but the price is worth it just for the ocatvefuzz alone in my opinion. So the fuzz setting is a nice bonus and allright enough.

Only thing you need to keep in mind that it definitely needs it's own power supply since it needs an AC current. So it's not daisy chainable with most pedals. However it does take a battery, which is nice.
Helpful · Not helpful · Report
Report rating…

Send report
features sound quality handling
Fulltone Octafuzz OF-2
Alan6646, 19.09.2014
Great unit from Fulltone. Easily captures the Band Of Gypsies tone from Jimi and more. The Fuzz on its own is also great and very usable. Great for thickening up the tone of a Strat. Also dead quiet. Fantastic pedal allround.
Helpful · Not helpful · Report
Report rating…

Distortion Effect Pedals
A classic Ibanez Tubescreamer or Colorsound Tonebender can fetch many times its original price from guitarists in search of the ultimate killer tone and sustain.
Interesting Accessories 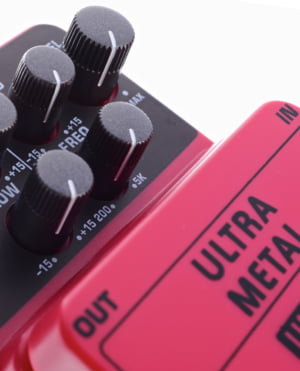 Show all
Distortion Effect Pedals
A classic Ibanez Tubescreamer or Colorsound Tonebender can fetch many times its original price from guitarists in search of the ultimate killer tone and sustain.