In our band, the drummer and I have been on in-ears for a long time. I find I need a very specific mix (too many nasty harmonies) so I bought the P16M for our Behringer system. I'm happy - but the guitarist and keyboard player still make too much noise, and soundchecks were taking too long. In the end, they bought some Behringer small active speakers and attached them to their mic stands, but still soundchecks took too long, with everyone wanting too much, in too short a time. I bought another couple of P16M personal mixers, but discovered that they need powering and that was a bit of a pain.

The P16D Ultranet unit simply lets you connect each P16 mixer with the single cat5 cable. Power is supplied down the cable, making the wiring much, much simpler. Connection wise, the device sits in the rack next to the S16s, and connects to this unit with another Cat5 cable. You turn it on, plug in and there are no controls whatsoever.

The only downside I can think of is that Behringer don't make a rack mount kit - so mine is simple in the rack, gaffer taped to the top of the S16 - a bit of a bodge but fine in practice.

This unit will also connect to other behringer Ultranet devices if you don't have an X32 to drive it.

It's simply a distributer of the Ultranet audio and power.

Can I recommend it? Of course - it makes wiring so much more simpler than trying to supply mains power near each mixer on stage.
Helpful · Not helpful · Report
Report rating…

Send report
comfort features sound quality
A device that is all it is cracked up to be
IamNotaDrummer, 04.01.2021
This is a very basic device which simply allows you to transmit power and data to P16M units with one cable. We have 6 of the P16M units plugged in for my band and have never had any issues with it. A few reviews mention the need for spare fuses but we haven't had any fuses blow since we got it and I don't anticipate any reason it would start blowing fuses now, hopefully it was an issue that Behringer have resolved.
Helpful · Not helpful · Report
Report rating…

Send report
comfort features sound quality
indispensible Behringer P16D
Kenny B., 13.11.2014
If you use P16M personal mixers (and you should!) this distribution box supplies signal AND POWER to your units, reducing cabling dramatically and adding reliability,and gives a great central stage distribution! if you use an X32 (and again you should) this is indispensible!
Helpful · Not helpful · Report
Report rating…

Send report
comfort features sound quality
Allows you to use P16M without external power
Geof H., 25.02.2020
This feature alone is worth the money. Rather than daisy chaining your P16Ms, this allows you to use a star formation and provides power to the P16Ms over the cat5 cable. A great upgrade for my system. This will be used in theatres and bands.
Helpful · Not helpful · Report
Report rating…

In-Ear Monitoring
In-Ear monitoring - reasonable prices since a few years only - a real bliss for any live musician. Why? Find out here..
Free Downloads 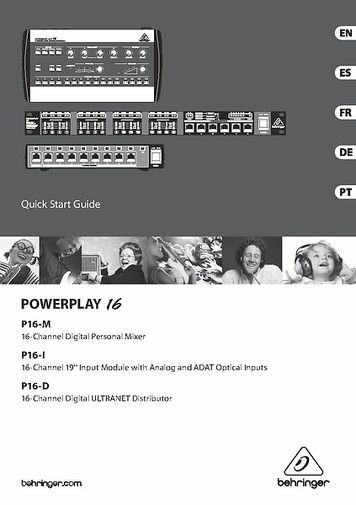 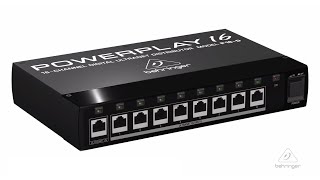 Show all
In-Ear Monitoring
In-Ear monitoring - reasonable prices since a few years only - a real bliss for any live musician. Why? Find out here.. 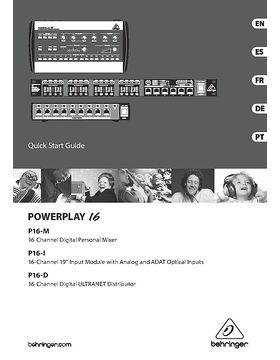