"Luckily" this summer I do have a couple of gigs where one wouldn't be supplied, so I finally had an excuse to buy one.

Is it the BEST kick mic ever made for every genre? No, I wouldn't say so. And it's completely useless on kicks without a hole in the reso head.

But if I could only bring one kick mic for a festival and I needed something that'll _just work_ for every band, this mic is my guy. It also cuts down on stage clutter by not requiring a stand. Which not only looks good, but also means there's one less thing on stage for the vocalists to trip over.
Helpful · Not helpful · Report
Report rating…

Send report
features sound quality
Delightful, Versatile Microphone
D Rea, 05.08.2020
Absolutely wonderful microphone. I don't go anywhere for work without this (live & studio). Predominantly, I use this mic for kicks and pianos, but also found uses for certain theatre/stage applications. The tight Half Cardioid design makes it ideal for these scenarios.

The cut around 400Hz has come in quite handy on a few occasions with problematic kicks or stage where conditions are not ideal. Pairing this mic in particular with the Beta52 means achieving a particularly accurate picture of a kick. Even without the 52, you'll still achieve a super clean, punchy tone. Predominantly I'll use it internally for Kicks and Grands and have to do very little to achieve top quality results.

There is a very good reason why touring engineers request this mic so often when sending on tech riders to venues.

Very sturdily made but of course with any mic, treat it like it was one of your own children and take care of it.
Helpful · Not helpful · Report
Report rating…

Send report
features sound quality
Shure Beta 91A
Robert814, 14.02.2016
I've been looking at the Shure Beta 91A and the low-mid cut switch at around 400Hz seems like a very useful and appropriate feature. The main doubt was the size and shape of this mic. Fortunately for me it turns out to be only about a quarter of the size I'd expected. (I didn't bother to ask). There is a rather good elastic suspension mounting kit available (not made by Shure though) which enables it to remain mounted inside the bass drum. The Thomann sound samples when compared with other bass drum mics appear to show this as a very clean and clear sounding mic. I usually find these samples very useful and if downloaded and listened to about 20 times in comparison to other mics, you get about an 80% idea of how the mic will actually sound. The technical spec pdf describes this mic as "Half cardioid" and shows a 60° angle above floor/stage pickup area, which is most appropriate and also explains why another reviewer discovered that placing this mic on the floor in front of the bass drum, but moving it back a bit further than normal picked up the whole kit, but with the bass drum strongest - great for in ear monitoring for the drummer (who didn't want too much of the other band members). I am most impressed with the sound when placed on the floor/stage in front of the bass drum at more conventional distances. That gives me the best bass drum sound I've ever achieved to date. Crisp, clean, with a well defined thump and still able to reject unwanted spill over in a live situation.
Helpful · Not helpful · Report
Report rating…

Send report
features sound quality
Handy, affordable, reliable and robust
Cal Richard, 26.06.2018
This was one of my first microphones I ever bought and worked with. It?s a versatile clean strong mic that has yet to let me down.

I?ve mainly used it for recording bass drums and more commonly as a mic on the inside, coupling it with a D112 or a Beta 52A as outside mics, but to be honest, when mixing I rely almost entirely on this mic, especially if what I?m looking for or those clean round lows and sharp defined highs. I normally use the other mics if I want it to sound more organic, per se. As for positioning, I?ve almost never repositioned the mic once placed inside the kick, it sounds good almost anywhere you put it (but obviously sounds different, play around with it to get the sound you want but it will sound rich and full wherever placed, within reason). I?ve never really found the need to use the 400Hz cut switch but it?s handy to have it if you need it.

I?ve used it on bass amps and, as with the bass drum, sounds crisp and clear whilst round and defined in the low end, that being said, the positioning for the bass amp will require a bit more fine adjusting if you want to make the most of your amp (I also recommend lifting mother the mic and the amp off the ground to avoid unwanted vibrations the amp causes).

It?s extremely robust and sturdy and fits right in your (slightly oversized) pocket. I?ve had it for years now and after much abuse it still sounds and looks as good as the day I bought it.

Over all, a very robust and reliable mic that?s quite versatile and will certainly be worth your money.
Helpful · Not helpful · Report
Report rating… 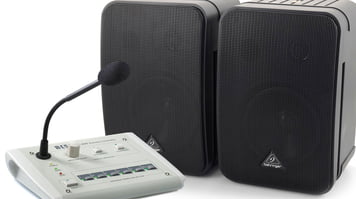 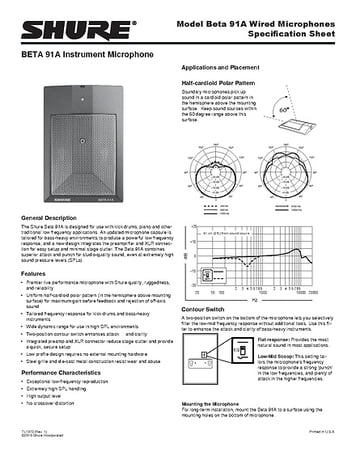 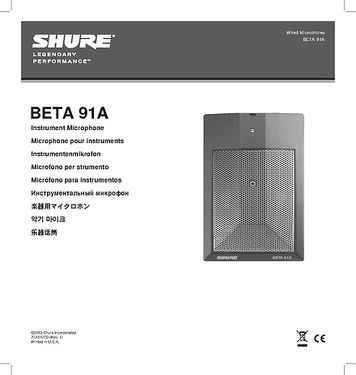 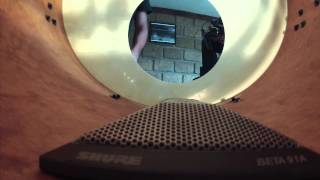 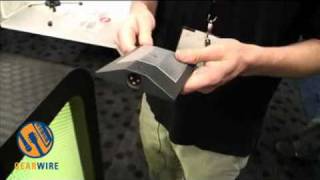 Show all
Shure Beta 91A Boundary Micro­phone: Get Your Kicks With This Updated...
gear­wire 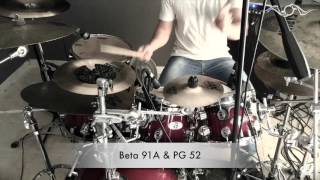 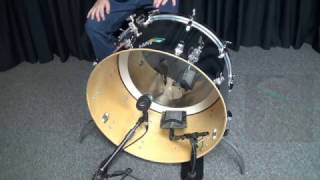