The pots feel slick but with enough resistance that they stay in place.

there are a few drawbacks though, mostly from a design area:
- you need to make sure you have a coin, knife or screwdriver of some sort if you want to change battery, just to open the belt clip (which you need to remove before you can swap the battery).
- the battery compartment itself is a bit clumsly, you kind of need to fit the battery in the lid before closing it, and it can take you a few tries before everything fits. It's also doesn't close that well, and you pretty much need the belt clip over it to make sure it doesn't open. The cable management for the 9V battery also is flilmsy and ill suited to its task, and I worry that it might break over time.

But my biggest gripe with it is the on/of switch. It is a rather large button on the bottom of the device, and can be jostled easily when working on it, especially when working with it live, or during recording jobs (like with a boom op or stuff like that). So it's prone to suddenly shut off. Presonus should really replace it with a sliding switch of some kind so that it much more secure, especially since this is intended as a mobile device to be worn on the body.

If you're on a budget and want a mobile battery powered headphone amp, this is a pretty good option though. just be carefull with the power button.
Helpful · Not helpful · Report
Report rating…

Send report
handling features sound quality
Easy to use little box
16.11.2016
I use them for personal monitoring in the studio. They are attached on top of a mic stand (Millenium MS-2004), very easy to carry them around. The splitter cable it comes with is long enough. To my ears they sound a little "harsh" on the top end, but nothing that I cannot live with. More than enough volume even for tracking drums. It feels very sturdy, the pots feel quite good quality. I think it's a bit overpriced though.
Helpful · Not helpful · Report
Report rating…

Send report
handling features sound quality
Product Find
John1701, 06.09.2020
Ever come across a piece of equipment you thought wow! how have I not heard of this.
This is one of those products. Firstly the price is exceptional value, it’s built better than a tank, easy to use and set up, does exactly what it should. I use Fender in ear phones and the sound is just amazing, clear, all frequencies catered for and just a brilliant buy.
Overall as they say does what it says on the tin and more.
Helpful · Not helpful · Report
Report rating…

Send report
handling features sound quality
Kirschner, 26.01.2017
Easy to use, good sound, good touch of the potmeters, and coz it is attachable onto a microphone stand, it is very easy te move it in the studio any close to the player.

In-Ear Monitoring
In-Ear monitoring - reasonable prices since a few years only - a real bliss for any live musician. Why? Find out here..
Free Downloads 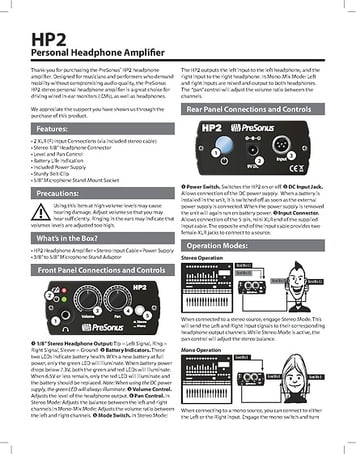 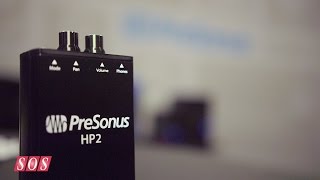 Show all
Headphone Amps
All you ever wanted to know about the small helpers called headphone preamps ... can be found here
Show all
Manual
PDF
test results:
Read review