właściwości dźwięk wykończenie
This MB75 mic versus an SM57
gordonliv, 11.06.2013
It's never easy being forced to re-think your whole ethos on things like microphones. We're all told from day one in sound engineering that for snare drums, brass instruments, guitar amps and even vocals, the Shure SM57 is king. Consequently I have several of them, and have happily used them for years, thinking I was in the "can't go wrong" zone.

And then I had cause to buy a Thomann MB75, just for a small recording project that didn't really warrant getting another ‘57. So just out of interest, I thought I'd compare the MB75 with one of my ‘57s.

With the help of a friend, I recorded a snare drum track and a vocal track. Each track was recorded at the same time but with two mics - the MB75 and the ‘57. Then we solo-ed each track and did a comparative listening test, on both the vocal and snare track.

The MB75 won on all counts - on both tracks. I have to say, it didn't win hands down; it was a close-run thing. But it definitely won.

On the snare track, the MB75 had a warmer, rounder sound than the ‘57 with a slightly more pleasing mid-range. The ‘57 in comparison had a slightly honky sound with a nasal sharpness in the mid that would probably need a bit of EQ to smooth out. As I say, the differences were not huge, but they were definitely there. We even tried blind listening tests to make sure we weren't being influenced by knowing which one was which, and we did this by one person turning his back so he couldn't see which track was muted, then playing one track then the other. The two different tracks - and consequently the two different mics - were easily identified.

We did broadly the same thing with the vocal tracks. The same vocal performance was recorded with the two mics, and compared in an A/B fashion. The MB75 had a smoother sound without the pronounced mid that seemed to come through on the ‘57. We did both speech and singing, and the same was true for both. Although the differences were not huge, they were real and again, in blind tests, both mics were easily identified.

None of these differences were so great that the mics could not be made to sound identical with the judicious use of EQ, and of course some people may prefer the slightly more "middle-y" sound of the ‘57 rather than the smoother sound of the MB75 (although I can't think why - the MB75 definitely sounded nicer!). But of course if you rely on EQ to get the sound you want rather than have the mic do it for you, then you're using up valuable resources and processing power on your computer (or whatever multi-track device you have). In my humble opinion the closer you can get to the sound you want WITHOUT using your EQ, the better. This mic, surprisingly, gets closer to that sound for me than an SM57, on both vocals and snare drum.

We didn't do a comparative test on handling noise - given that a mic of this nature is hardly ever hand-held, we didn't think it was relevant. But, if it's of any consequence at all, the MB75 did feel a tiny bit lighter in the hand. But only by an ounce or so.

And then of course you look at the price! It kind of makes it a no-brainer, really. With the MB75 being about a quarter of the price of the '57, I'm really at a loss as to why I didn't buy several of these things years ago, and save myself processing power on my computer... not to mention hundreds of pounds!

Recording E-Guitars
Our aim is to explain the basic process of recording the electric guitar!
Darmowe pobieranie 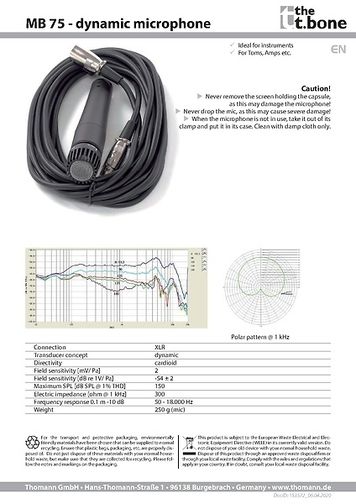