obsługa właściwości dźwięk wykończenie
The 4-channel monster
Archyx, 18.08.2019
tl;dr : The speaker output wiring is a bit quirky. Lots of gain, possibly not good for sensitive speakers in a smaller room.

I bought this amplifier to have a single amplifier unit to drive a bi-amped passive 2-way speaker setup. The amplifier was driven by a dbx DriveRack PA² (EQ, crossover, driver alignment delay). The only drawback in this application was excessive amplifier gain for the little Black Pearls, since this particular audio setup was not to be played loud. However, another pair of speakers (Radiotehnika S-400 4-way monsters) were perfect to be driven by this amp with both amplifier pairs in bridge mode.

The blowers are audible in a quiet room, but then again, this amp is most likely intended to make the speakers loud before the fans really spin up. Another nice thing is that the automagic stand-by function can be switched off.

It's heavy, too. The case design is such that the amp can be set down on an even hard surface on any of its sides without damage to controls or connectors. Gain controls feel good with a little dampening and have detents.

ATTENTION! Since the observation below is not documented in the manuals, please check the output wiring of your amp before connecting any speakers with any methods not described in the manual! There may be changes between board revisions as products are improved!

So far the only inconsistency between the user manual and the actual device I got is the speaker output connectors. The pairs in them are not connected in parallel as the manual loosely suggests, but are connected so that the second pair (2+, 2-) on ch 1 output matches the first pair (1+, 1-) of ch 2 output. The second pair of ch 2 is left open. (This is actually what I was initially expecting this kind of amp to have!)

This means that you don't need a silly Y-cable for connecting a speaker to a bridged amp as specified in the manual, but connecting the 1+ and 2+ contacts of an odd-numbered speaker output to the speaker's + and - does the trick. Also bi-amping a speaker with dual inputs is easy with just one NL4 SpeakON plug carrying both pairs out of the amplifier.

The same applies to the 3-4 channel pair with the exception that on the ch 3 output connector 2- is connected to 2+ instead of the ground with the other 1- and 2- contacts. This means that both grounds (or "negatives") for bi-amping on ch 3 need to be connected together to 1- instead.

The performance for such a low price tag is great, but you can expect some little quirks like this to come with it.
Przydatne · Nieprzydatne · Zgłoś nadużycie
Zgłoś nadużycie... 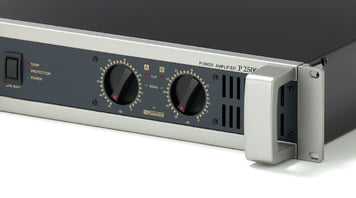 PA-Amps
You could sum up the whole idea of a PA power amplifier in a single word - sound. The power amp is a crucial part of a musicians live sound.
Darmowe pobieranie 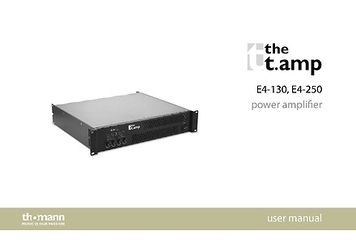 Pokaż wszystkie
PA-Amps
You could sum up the whole idea of a PA power amplifier in a single word - sound. The power amp is a crucial part of a musicians live sound. 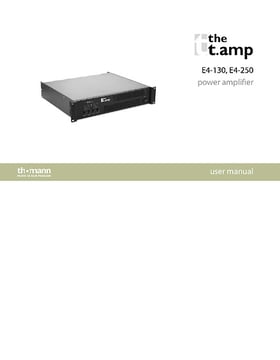