Cons: Can't find any (for the price!)

obsługa właściwości wykończenie
Does exactly what we wanted
F., 24.01.2016
We bought this as our Bass player was going to be unexpectedly away for a gig. We didn't want to spend hours with a Dep. In this band I play Sax, but when our Pianist was soloing she wanted some support. Initially we were going to put it through a midi voice box, but we discoverd that our stage piano gave us access to it's internal GM voices, so using the midi out from the Swissonic we were able to patch into the Bass on the stage piano, which eliminated some wires and power supplies and also made the transition from Piano/Bass split to Swissonic Bass and Piano more seamless. (We used Piano and Bass split keyboard on the SP) I was able to play Bass with my left hand. How did it go? Great. The unit itself is light, but rested nicely on a stand. We used a USB plug to power it up, and the midi out socket into the keyboard. The instruction book is quite explicit, but not really needed as the set up is quite logical. Occasionaly hitting a note did not produce a response, we suspect due to operator error. The set up out of the box was fine and selecting the right program was easy. (Starts at 0, not 1.) We liked the Aluminium case which should help with life on the road and all in all we are really pleased with what we got. The keys are quite light in operation which meant I didn't get fatigued while playing around 40 Bass lines. I spent quite a time trying to find a keyboard with proper midi, not USB, and this has both. The full size keys also make it easy for me to play without having to concentrate too hard. I have large fingers so small keys don't really work well for me.
What would I prefer? Well if I could find one a 25 key with weighted keys, but haven't been able to source that so dream on! Oh and a Midi in/through would be nice. I haven't looked at the software so can't comment, we have plenty of that in other formats so probably won't look at it.
Delivery, despite the efforts of the French postal system to delay it, was as usual from Thomann, fast.
Przydatne · Nieprzydatne · Zgłoś nadużycie
Zgłoś nadużycie...

obsługa właściwości wykończenie
simple but good
vuztoc, 04.01.2019
I use it to just play simple lines with virtual instruments and to do bass lines with a bass synth module. For this use is quite perfect, a fine keyboard with long sized keys and a good action, featured with very basic midi commands. It always worked properly and it's built with sturdy materials, so I have nothing to complain. For the price a very good product.
Przydatne · Nieprzydatne · Zgłoś nadużycie
Zgłoś nadużycie...

obsługa właściwości wykończenie
Nice and easy MIDI keyboard
Koen Vdd, 03.01.2020
This accessible model is easy to handle and doesn't distract you with lots of fancy features. Therefore it is suited well for beginners. Although there could have been a few pads like with the AKAI that would be helpful for drumming parts, it is still a nice and compact MIDI keyboard.
Build quality is okay but for this money, you can't expect any more. Allround a great buy for me.
Would recommend it if you are looking for a first MIDI keyboard.
Przydatne · Nieprzydatne · Zgłoś nadużycie
Zgłoś nadużycie...

Controllers
These days, musicians are experiencing the increasing complexity of their instruments and devices at first hand - regain some of the control you've lost!
Darmowe programy do sciągnięcia 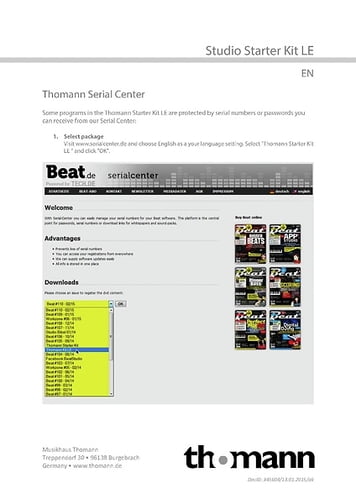 How to register and get serials for Starter Kit LE 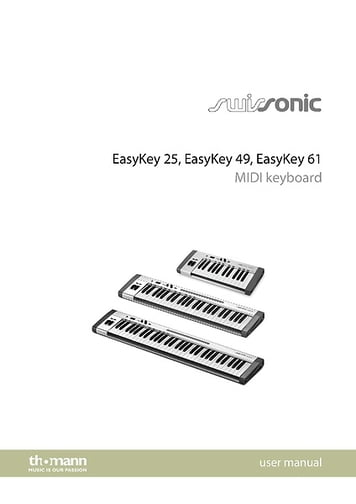