A cajon with an okay sound but a poor build quality
tomtomssi, 14.03.2018
I decided I wanted try out playing a cajon and, well, decided to go with the cheap option. Still, I expected more than what the Millenium BlackBox Cajon delivered.

The product arrived well packaged as they always do when ordering from Thomann. Upon opening the package, I was greeted with cajon that had cracks in the paint and dents in the wood. The paint on the body was cracking in multiple places and the wood was visible underneath. The three lines on the body have black paint spilled around the edges and it looks horrible.

The sound doesn't really match the sound samples. The snare sound is pretty decent but the bass sound is not up to par. Both the bass and snare have a crackling sound that doesn't feel right.

Overall, I think this cajon looks and feels like its made as a child's school project. Poor paint job, dents in the body and a crackling sound. The build quality is borderline broken.

I would advise you to consider adding a few bucks to your budget and buy a better product.

dźwięk wykończenie
I was a bit too optimistic.
Nickname Time, 02.07.2020
I got this guy at the same time as a cheap banjo, all based on reviews, and really saw both sides of trying to do stuff on the cheap. The banjo looks, feels and sounds like a much more expensive instrument. The cajon looks, feels and sounds like the cheapest cajon I could find. Sadly I think it's going to be used more as a stool than anything. I'm going to have a go at making it a bit better myself, new snare etc, maybe repaint it...

Problems in the order in which I saw them...

The look - probably from the photos this is part of the attraction of this cajon. Those three stripes through, they look like they were made with bad masking tape painted over with a roller and taken off too soon. The edges are terrible. And the paint over the whole instrument has drip marks.

The sound - the snare is awful. It's a guitar string stretched around a nail and pressed loosely into the back of the face of the cajon.
I know this is one way to do the snare, possibly the oldest and most traditional, but it's done very badly. You can always just hear the note of the string, as though it was ringing out open on a guitar. I've experimented taping it down in various spots, which has helped a bit, but not enough. Then if you want to use your foot for pitch control on the face of the cajon, the relative position of the string changes and it rings out louder than ever. I'm looking into how I can fix it, thinking probably of removing it and screwing in half a drum snare.

I'd not even recommend this for a beginner or a child. I think the risk of putting that person off the instrument is too great. For context, this is the first negative review I have ever left of a product I've bought new ... I'm not holding it to unrealistic standards, I promise.
Przydatne · Nieprzydatne · Zgłoś nadużycie
Zgłoś nadużycie... 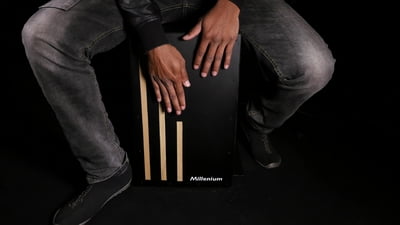