During the period from July 5 through August 10, 2021, you will receive a bonus Summer Upgrade Pack when you purchase a product from LD Systems that qualifies. Included in the pack is a backpack, a Neoprene insulating sleeve for beverage cans, a beach towel, sunglasses and three wristbands.

obsługa właściwości dźwięk wykończenie
Great for acoustic music
Winnetou, 17.08.2018
Update: had to send back a base unit for servicing. Thomann was great in handling the repair, but it makes me worried about the future of the unit.

We run the annual International Bluegrass and Acoustic Music Festival in Abaliget, Hungary, and tested a pair of these for the main speakers. The venue is an amphitheater on a lakeside with rising concenctric levels for sitting. In the 3 days music played was from solo performances to 6 piece bands (22 acts in total), instruments included acoustic guitar, mandolin, banjo, dobro, violin, upright and electric bass, cajon, barbuka, piano, accordion, flutes, etc. Mixer was a Soundcraft UI24R, microphones included condenser mikes from Neumann, Audix and DPA.

If you're looking for faithful reproduction of acoustic instruments and vocals, look no further. Great price/performance ratio for this type of music, very transparent sound, and we were shocked by the sound level of the set. Our aim was to set the set for linear response, and the sub pot on the system was left on about 10:00 for this - very nice, even response throughtout the entire sound spectrum.

The high-mids were maybe a bit agressive, and the highs are pronounced, but those can be set with EQs if you like.

We faced two issues using the system, one comes from the nature of the beast, the other one doesn't:
1: the sound is very directed, and in the beam the sound is very strong even 10m away in open air, the response is very even. But when you go above the beam, the sound weakens considerably. In Abaliget the 2 upper rows in the audience were way above the top the speakers, and the volume for them dropped heavily compared to the rows below. We conside this to be the nature of the speakers not to spread upwards, so it's not a failure, it's just a circumstance.
2: the speakers have a very heavy backfire to the stage - actually the stage was so high in volume in the mid range that it caused some issues with feedbacks. For the 3rd day we started to use this to our benefit, and first set the mains for all bands and then only added in some of the instruments in the monitors that were lower in volume. Nearly no vocals went in the monitors as there was planty of that coming back from the mains.

During and after the event we got several compliments about how it sounded and we also hear good quality on the videos taken by the performers. Many didn't understand the sound comes from the small package only. :-) We (of course) also got some negative feedbacks, that the sound is way too honest, the basses are not heavy enough, etc. The honest sound for acoustics is a benefit for us, and how much bass (bass guitar, drums, whatever) was in the mix was due to personal preference, not a limitation by the system.

We also used the system before in pubs for quite bluegrass gigs, and it excelled also there, the feedback rejection (speaker behind us with 9 microphones) was also nice, but that's another topic I think :-)
Przydatne · Nieprzydatne · Zgłoś nadużycie
Zgłoś nadużycie...

obsługa właściwości dźwięk wykończenie
Impressive build
Quimeraman, 30.11.2019
I was skeptical buying from Thomann since I live in Puerto Rico. I only have to say that everything went smoothly. My congratulations to the Thomann team!! When I received the Maui I checked all components and I have to say they are sturdy and well built.
I have a 6 man latin dance band playing midi backtracks, live conga, bongo, piano, bass, etc. I had planned to use the Maui along with a classic Bose L1 I own for the main speakers. After trying the Maui for the first time I noticed it produces a thick heavy sound ( a lot of mids) compared to the Bose, also much punchier. I was surprised at the quality of the bass (sounds deep and tight)! I tweaked my console and the Bose and finally got them to sound nice together. Impressive would be the right word. We have played three times already with this setup and people come to us to congratulate us on the clarity of the vocals and the instruments.
PROS: Excellent sturdy build, excellent bass sound, easy set up
CONS: Heavy sub, uncomfortable to carry, should have an extra handle. System is designed for 240v European electricity but the Maui switches to 120v American system automatically thank goodness! You have to supply your own plug in cord as the one supplied is the European one. Power wise, the Bose sounds louder with same settings! Had to change from line to mic input on the Maui to reach a decent equivalent.
Besides these "faults" I am very happy with the product. It performs beautifully and I would definitely recommend it to other musicians! Hope it lasts as long as my Bose (13 years)!
Happy Gigging!!
Przydatne · Nieprzydatne · Zgłoś nadużycie
Zgłoś nadużycie...

Crisp and punchy sound.
Joe S, 27.06.2018
I'm a solo artist and I needed something light and powerful for gigs.
After weeks of research and comparing I finally decided to go with this product and I was blown away by it's performance.
It's got surprisingly tight and loud bass and the mids and highs are crisp and clean. It's an absolute powerhouse as well!
The columns are solid and slot into each other snugly.
Another handy feature is the bluetooth which I never thought I'd need but works flawlessly. When carried in their dedicated bag (sold separately) I can carry everything in to/ out of the gig at once with little effort. Also can be rigged up with another system in stereo!
Przydatne · Nieprzydatne · Zgłoś nadużycie
Zgłoś nadużycie...

obsługa właściwości dźwięk wykończenie
Tall, In shape, Loud, Easy to use
sirmacho, 12.06.2019
Tall, Handsome, Loud enough, Easy to use. You can't go wrong with this speakers. Sound like a bit processed that I can't tell it is natural sounding speaker. But you will EQ and Dynamics on every channel anyway. Some venue with 200~500 people it is the right one to choose.
Przydatne · Nieprzydatne · Zgłoś nadużycie
Zgłoś nadużycie...

Choosing a PA System
Whether youre a fan, a promoter or a performer, the refined craft of live sound is vitally important.
Przydatne akcesoria 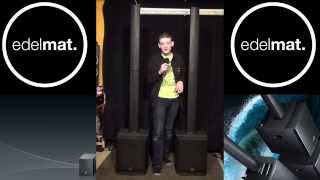