Pros:
- The classic MiniMoog sound is all there.
- Solid metal and wood case.
- Nice sounding Juno chorus addition.
- Feels like an actual instrument. The whole structure and the tilting panel make it very accessible to the user.
- Paraphony.
- No patch memory (yes I consider that a feature).

Cons:
- The Oscillator waveform and octave switch caps rotate for quite a few millimeters before the switch actually starts moving beneath that. Feels quite off and unreliable.
- The black keys require a noticeable amount of extra pressure to act the same way the white keys are. Too noticeable when using velocity.
- Velocity response seems to always affect the cutoff frequency in a way that sounds like an extra envelope making playing notes with filter resonance impossible. I managed to deactivate through the app but was still there when played from a daw and had to bring velocity response to 0.
- The power button on the front panel is a really bad move and can easily switch the instrument off accidentally.
- Absence of a 440Hz tone switch for tunning. Thankfully I have my model d to tune poly d too however it'd be so much better to replace the power switch with the A440 and place the power switch somewhere in the back panel.
- The overdrive circuit feels rather useless as it doesn't suit the rest of the instrument sound.
- All in all, it feels like Behringer has little idea about how to design a functional front panel layout from an actual musician's perspective.

Overall I would recommend this to any musician looking for a classic analog instrument feel. I'm quite troubled by the build quality though. It makes it feel quite unreliable. I'm quite uncertain about whether I should return my copy or just relax and enjoy using it.
Hasznos · Nem hasznos · Jelentem!
Értékelés jelentése...

This unit packs a lot of punch, especially for the price.

I would love to have an original Model D just a much as you, but I don't have a third kidney to auction off - so to be able to get a sensible modern take on a classic is a fortunate opportunity.

Sonically, it really hits the spot and when driven through the external input it's a meaty experience. Chorus is a nice feature, however on 2 there is an overt warble , maybe a bit too much. For leads and bass it clears the floor, and fits for many different genres and playing styles.

As with any analogue synth it does sound best after warming up for half an hour to a couple of hours . For some real fun, turn the Glide all the way up, and switch to Unison mode; then just as you turn the synth on, just a few chords and riffs will provide instant hilarity and have you saying 'Portamento Gosh!'. Lead lines at such a time sound similar to a Big Room EDM monster slowly being toppled, and who doesn't wanna know what that sounds like?

As has been documented, the Poly mode is not truly polyphonic, and it's a bit dodgy all in all in this department, notes here there and everywhere and I stay away from it altogether.

Generally, the sequencer is a positive extra touch, it's a bit fiddly to get to grips with, but once done it's a fantastic feature.

Behringer's Synth Tool is a must to calibrate the Poly D, some of the default settings will not be to taste for everyone.

As default, the Poly D is set to be the Master Clock of a MIDI chain, and not to receive clock signal from other devices (drum machine/sequencer) via MIDI. However, after plunging it into Synth Tool I was able to change that quickly. I haven't quite worked out how to write sequences using synth tool yet, and although the sequencer could use a little update so one might be able to edit with a bit more intricacy.

Overall, you can't go wrong with this unit.


P.S -- Uli, if you're reading this, please can you make patch sheets/maybe an online thing like 20 Patch (For the MS-20), but for the Poly D? Thx
Hasznos · Nem hasznos · Jelentem!
Értékelés jelentése...

kezelés tulajdonsagok hangzás kivitelezés
Worth the extra
Robert7183, 21.07.2021
If you cant decide whether the poly d is worth the extra cash relative to the d then i can assure you it is. Assuming you can afford the extra and have the space to accommodate it then go for this every time. This looks, feels and plays like a real instrument in comparison. Behringer really pushed the boat out on this one. I bought it because it was a good price and the extra oscillator, the sequencer, the bigger/better knobs, the keybed and the chorus were all appealing. I now have both but the d will be offloaded soon - this is way better - it is way more responsive than the earlier desktop unit. It is a quality piece of kit.
Hasznos · Nem hasznos · Jelentem!
Értékelés jelentése... 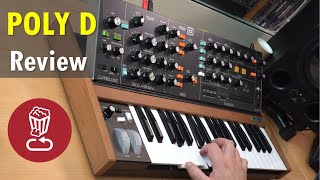 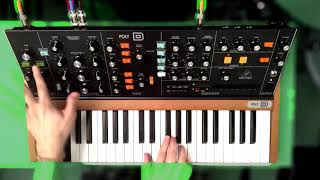 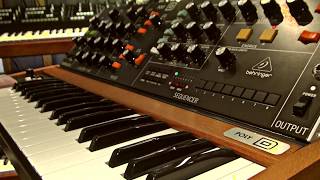 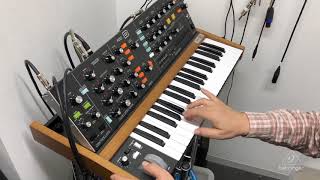 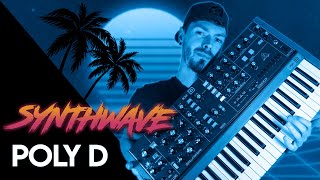