Since then I've been exploring and getting used to it. It works well, sounds good, records fine so far (I use a solid stage external drive), and has so many facilities, more than I'll ever need, that I'm still exploring its possibilities.

It's very compact and light, smaller than the Mackie and even with the external power supply it's lighter; and the case that comes with it is very good, very light but well protective)

Unlike other digital mixers, there are plenty of aux sends so it can be used with external FX processors, not just the internal ones.
The taper on the gain pots is strangely different from most other mixers, but that seems to be intentional. So, with that and other obvious digital/analogue differences, transferring from an analogue mixer does involve some readjustment of one's norms.
The file structure of the multitrack recordings is different from the ICE-16, too, so that involves some re-learning.

With analogue equipment one just buys it and uses it; here as with much new digital equipment there has been an ongoing series of firmware upgrades. In the course of them most teething bugs seem to have been eliminated.

I'm still nervous, though, that one day at a critical time, far from home, it'll just have a digital glitch and refuse to work - this seems to be rare, but there are incidents reported on the Forum (which are dealt with very thoughtfully and helpfully by the QSC engineers), so at present I'm carrying the Mackie too as a backup, though if the glitch were to be in the middle of a gig that wouldn't be much help)
Helpful · Not helpful · Report
Report rating…

Send report
handling features sound quality
Small, portable and usefull as hell!
Honza, 10.05.2017
This is one of the best pieces of equipment I own. Control is very easy, intuitive and when you can't figure something out, there is a digital manual right on the touchscreen.

This mix allows you to make a sound for whole band and distribute the signal in the way you want.

Due to great number of AUX outputs, you are able to make up to 5 stereo outputs for monitoring.

Presets for certain instruments are good guide where to start and you can customize them to your pleasure. You can save your own presets, which makes it very great tool for live gigs.

Control via wi-fi is amazing tool too, if the signal is not strong enough due to distance, you can make local area network with regular modem.

Sound from this mix is great for live performances, it can handle everything from small venues to big open airs.

Touch screen itself is not that sensitive and it's hard to be precise using it, but in the end you are overcoming it by using tablet to control it properly, so not a big can anyway.

I'd recommend this to everyone who cares about their live sound. Well spent money
Helpful · Not helpful · Report
Report rating…

Send report
handling features sound quality
Packing a lot into a small package
UK Martin, 05.06.2017
I bought this 2 years ago. Early glitches were ironed out after firmware upgrade. Also initially only supported iOS devices, but then the Android app. was released..at last!!

I have been working for more than 40 years in bands etc., This mixer was so easy to set up, using the onboard library. Every time we set up, we plug everything in switch it on and without changing ANYTHING it sounds exactly as the previous gig. People always comment saying " you get a great sound".

There are a lot of other mixers out there, some a lot cheaper but none in this price range with the connectivity of in's and out's. It can still be used free standing without an external control from a tablet/phone etc.

My only niggle is that there is no external fx bypass, there was talk of a firmware upgrade to resolve this but it never happened!
Helpful · Not helpful · Report
Report rating…

Send report
handling features sound quality
I found what I was looking for
15.06.2016
I am a member of 6 piece band and I have to manage the sound. When I read about touch mix 16, I sad to my self that I have to try it out and I am not disappointed. It has alot of features that made my life easier. 1 of the feathers that I like is you can record all the gig individuals sepretlay, then you can hear them after either to imptove your self or to make a mix. I use the recordings so I can began the mix before all my collegues arrive at the gig then I switch back to there instrument. The unit have 4 effects that you can use with rich in sound and you can save the scene of the day. The mixer has a professional quality in a small unit with the size of a laptop.
Helpful · Not helpful · Report
Report rating… 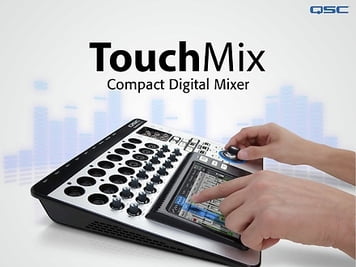 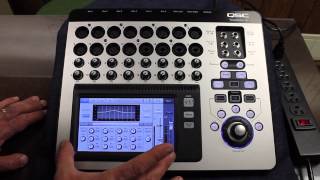 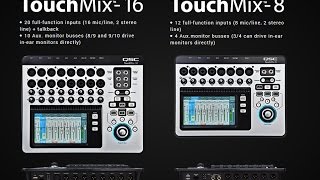 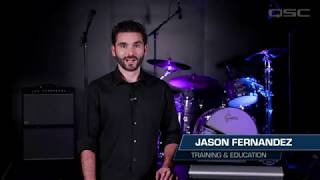 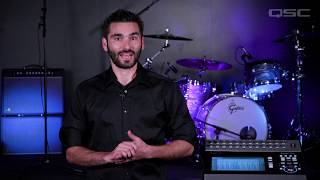 Show all
TouchMix Aux Mixing - Part 2: How to route effects to mon­itors
QSC 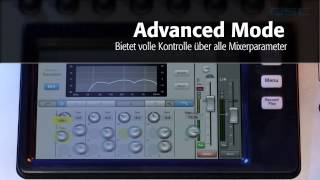 Show all
Mixers
In this guide well concentrate on the functionality of hardware mixers. They are an essential part of any live sound systems and studio setups.
Show all
Brochure
PDF
test results:
Read review