This is it. The classic, the most successful electric guitar in the world: the Fender Stratocaster. More precisely, the Fender Player Series Strat PLT MN ACB. If you desire to or can only own one guitar for your entire life: this is the one! The Player Series is made in Mexico and is the most affordable way to buy a Strat with the Fender logo on the headstock. Its features are of course anything but cheap, with premium woods, select hardware and a great look all combined in one guitar. That's not to mention details such as the tone control or the fresh look with the one-piece maple neck sporting a rear-side matte finish, plus the "aged cherry burst" lacquer finish on the beautiful burl maple top. Duly noted: "PLT" stands for "Plus Top". 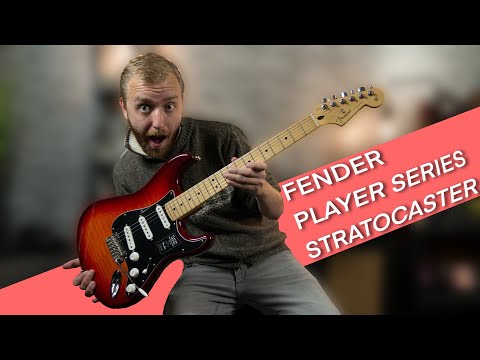 The Stratocaster from the Fender Player Series is quite similar in many details to the stroke of genius that Leo Fender rendered with his drawing pen in the early 1950s. The neck, including the fretboard, is made from one piece of maple with a modern C-profile. Its 22 frets, one fret more than before, offer enough space even for nervous fingers. The body is made of alder wood, finished with a top of flamed maple and varnished in a three-step "aged cherry burst" high-gloss finish. The three single-coil pickups are equipped with AlNiCo V magnets and deliver a modernised version of their well-known, dynamic and brilliant sound. In contrast to earlier models, the bridge pickup has its own tone control, while the other two pickups have to share one. The tremolo is now mounted at only two points, which reduces friction and dramatically increases tuning stability.

The Fender Player Series Strat PLT MN ACB is an extremely versatile guitar, but of course it has its core capabilities. With its three single coil pickups, these range from clean sound to moderately distorted settings. This is where it feels most at home, and where the pickup combination can show off its strengths: lively, open sounds that are full of character and rich in tone within the recommended gain limits. This is the perfect place to be on any stage or rehearsal room between Country, Western, Blues or Classic Rock. For harder styles we recommend a different pickup configuration with a Humbucker - which is of course also available for the Stratocasters of the Fender Player Series.

Fender is without doubt one of the most legendary guitar and amplifier manufacturers of all time. The company was founded in 1946 by its namesake Leo Fender († 1991), whose innovative ideas brought a breath of fresh air into the musical world. His Telecaster, Stratocaster, Precision Bass, and Jazz Bass are not only classics – they also continue to shape the styles of musicians in countless genres to this day. Timeless Fender amplifier models such as the Bassman, Twin, Deluxe, and Princeton also enjoy a stellar reputation. Besides maintaining its classic product portfolio, however, the company is also constantly developing new products that make Fender a driving force in today’s music industry.

The guitar for the desert island

What Fender released in 1954 is nothing other than the ultimate electric guitar. It is regarded as the universal guitar par excellence and is used in practically all musical styles. In terms of price, the guitars in the Player Series are in the middle of the endless Fender series. Originating in Mexico, they bear the "real" Fender logo and are therefore considered suitable for ambitious players, but they are still so affordable that they are within reach even for a beginner. In addition, they have an excellent resale value if you are looking to "upgrade" your guitar - or if your guitarist career doesn't work out. But in this case it was definitely not the Fender!

Delivery free of charge expected between Wednesday, 6.10. and Thursday, 7.10.