When you're buying this keep in mind that you might want to get some rope or one of those bike bungee cords, so you don't really have to worry about your stuff falling of the kart while on the move.

I don't like how you fold the kart, as you have stand on the cord that is on the bottom and pull it so the metal bends a bit and gets released from the lock. It's good in the sense that it wont open on it's own, but it's just annoying to fold and unfold it, so I personally just avoid that and try to keep it unfolded as often as possible.

I'm 165cm, so the length of the extended handle/handgrip thingy, is pretty good for me most of the time, but I'd assume that if you're much taller than that it might be a bit uncomfortable to use this.

The wheels are attached by bending a metal pin, but I didn't figure that out for a while, but when I did I realized I didn't have anything to bend the pins with, so before I got a pair pliers I just used superglue to keep the pins place... I really wish there was a more convenient way to attach and detach the wheels

Also the wheels are pretty hard so transporting fragile things like tube amplifiers might be a bit scary due to the amount of tremors that occur in every type of terrain that isn't 100% flat. I'm guessing you could make this a bit better by adding dampening or using softer wheels. I personally avoid putting my tube amp on the kart because of the hard wheels.

If you're confronted stairs or even a small ledge it's a pain to deal with as it would be with any kart like this.

Conclusion:
I'm satisfied with the product and I have already recommended it to my friends who also carry heavy music stuff. Also it's not really expensive or anything so it's not even that big of deal to buy
Auttava · Ei ole auttava · Raportoi ongelmasta
Raportoi ongelmasta...

Lähetä ilmoitus
Vakaus Työnjälki
Very good trolley
Charis, 29.11.2020
The trolley is solid and stable. I could transfer large pieces of furniture with it with no problem. The only issue I faced was to bend down the base. Initially I thought something is wrong with the trolley. Apparently there is a trick where one should slowly push the cable down for the two side metallic parts to bend and rotate.
This is similar to the use of baby strollers, so if one doesn't have experience with this, it takes some time to realise.
Auttava · Ei ole auttava · Raportoi ongelmasta
Raportoi ongelmasta...

Vakaus Työnjälki
Solid Kart
Kevo, 29.06.2019
I am a gigging singer & musician. I live in an apartment complex on the top floor. Having to carry my gear up and down through the building would take for ever and my back certainly wouldn't thank me. I also wanted something I could throw in the boot of the car to cart the gear in and out. So I made the decision to buy a hand truck/kart. Thomann as always offer excellent value and a wide selection of options and all good quality to price ratio. I chose this as it seemed a little sturdier and better built than some of the other options & I feel it will last the test of time & abuse thrown at it a little better than many of the others.

When it arrived, it was very well packaged, as is always the case with Thomann. It folds almost flat with the exception of the wheels. The wheels need to be fitted using the included split pins when the product arrives. Not a difficult job. The wheels are sturdy and will take a hell of a lot of abuse. They will also never go flat. The platform is big enough to carry any size speaker and most flight cases. The platform folds away by use of a rope located between the wheels. This is a little cumbersome and I feel in time it will give with constant use. Time will tell.

All in all, a great product at a great price. In today's health & safety conscious world a very welcome addition to the kit. Takes a lot of the hard work out of the "Donkey" side of things. The price is amazing too! Every musician that karts gear on a regular basis regardless of the distances involved should have one.
Auttava · Ei ole auttava · Raportoi ongelmasta
Raportoi ongelmasta... 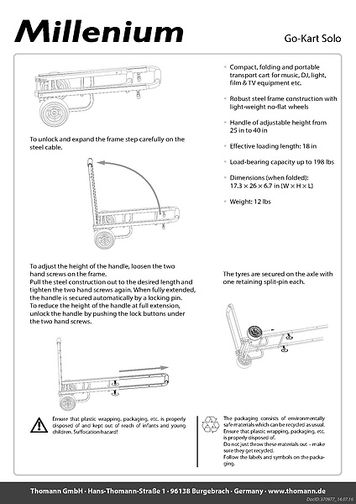 Data Sheet
Kiinnostavat tarvikkeet
Näytä kaikki
Bass Amps
Everything could be so easy, since all you want is to amp up your bass, right? This guide will provide you with an overview of what's available in the bass amp world!
Näytä kaikki
Data Sheet
PDF
testitulokset:
Lue arvostelu