Ominaisuudet Ääni Työnjälki
Unbelievable at that price
andrejgr, 14.06.2016
I play for 40 years, have 12 various guitars and play semi pro.
I have 4 acoustic guitars, from classic, dreadnought, grand auditorium and now also jumbo.

I really bought this guitar just for fun, because it's price is very nice and I read and saw some excelent reviews. I allways liked SJ-200 natural, but never found enough reason to actually buy it, as it is pretty expensive and my desire was never that strong.

With this one, one just can not go wrong. You get plenty of guitar for the money, excellent built, setup, solid electronics.

From the moment of unwrapping this guitar looks like it is triple or four times the price. It is very nice to play, excellent setup with Daddario EXP16 0,12 gauge.
neck is setup perfectly, action great and suitable for this kind of acoustic guitar.
And here we come to the next - what is this guitar meant for.
This is strumming type of guitar with rich and deep sound. Very neutral without any special character (martin, taylor, gibson sound...) resembling more to Ibanez or PRS neutral sound.
Since I have it only two days, this can be partly because acoustics get their character after some time of playing and when the wood properly matures.
This guitar has some raw spruce scent that makes me think, that wood could be a bit forced, so I will wait some time and be carefull, that I don't dry it out.
I expect, that harmonics will develop through time and use, right now it's more strings that give character to the sound.
So, when comparing this guitar to my grand auditorium Tanglewood TW170ASCE, Tanglewood sounds more mature, less deep bass but splendid mids and highs for fingerpicking, less for strumming.
Jumbo King CENT is quite opposite - mellow at fingerpicking, but great at open and full chords strumming.
But that is basically, what was expected from shape and wood and why I did buy this guitar.
I didn't expect much and I was pleasantly surprised and I still don't expect much, mut i see that this guitar has some potential to be more than just solid instrument.
But time will tell.
Anyway, great use of money and totaly worth it. Everybody that saw it, immediately guessed the price range of around 1000? or even more.

Edited after few months:
sound: developed more to typical Gibson SJ200 sound, sounds great when recorded.
as to mellow sound - it's not that, it is just that increased lower tones give different sound to high strings.
when played hard, this guitar roars!
action: set up high for strumming which it does excelently. If one wants to lower action, the whole mustache bridge has to be lowered. If you lower the action, some of the roar when strummed hard goes away.
Guitar tunes excelent and keeps tunning astonishingly.
Anyway, this guitar is not so much for gentle fingerpicking (jumbo's never meant to be anyway...) or it looses much of character.

Ominaisuudet Ääni Työnjälki
HB Custom Line King-CE NT
micoli, 24.08.2017
I ordered the guitar on Saturday evening and by early Monday morning the order had already been processed by Thomman and was waiting for collection for delivery to the UK. I was notified by email at each stage of the delivery process and the guitar was delivered on Wednesday, at 10am, which must be a record - I wait longer for items from a well known auction site to be delivered in the UK. I had to leave the parcel for a few hours but at 2:00pm opened the box. The guitar was very well protected and in perfect condition.

I was very surprised that I loved it at first sight and it's much better looking than on the Thomman web site. It is pretty much the same size and shape as my Big Tone. It is a big guitar so I would imagine that smaller players may find this model a bit too big for them. I was a little nervous about the distinctive looking bridge but its actually quite nice and well made.

After tuning, I gave it a try. I thought it sounded a bit 'bassy' and the trebles were slightly muted but after I plugged it in to the clean setting of my amp, it sounded much better - loud and clear and resonant. It has a very 'classy' acoustic sound and I'm sure that once the top has matured a little the sound will even out. The strings are a little on the thick side for me, I think they are 12's, but they seem to perfectly compliment the guitar although I may try lighter strings just to see how they sound.

I can't find any flaws in the finish and the wood grain looks wonderful. The bridge is well finished as are the inlays in the fretboard - I'm not aware of the inlays when playing. The nut it well cut and the Grover tuners really hold the strings in tune for ages. There is a very distinct woody spruce odour that comes from the top of the guitar as well. I thought the fret ends were very slightly a touch sharp but certainly not enough for me to consider getting my files out. The frets are well polished and the fretboard isn't dry. The intonation was almost perfect - 4 out of the 6 strings were spot on, but the 2 'E' strings were a little sharp - about 2 percent sharper so it's not really an issue. The same applies to the notes on the first fret.

The strings I found were a touch high after the 7th fret but perfectly playable. The high E is about 2mm at the 12th fret and the low E is about 3mm at the 12th fret. The saddle looks like it has been filed down already as the High E side is about as low as it can get while the Low E side could be taken down a bit, but that would compromise the action I think as I like the high strings to be a touch lower than the bass strings. I have often picked up new guitars with extremely high actions so this guitar get a prize for being really very playable out of the box.

There are no buzzing frets at all, which is a bit odd as the truss rod looks like it needs loosening a bit as the strings just touch the frets when they are held down at the first and last fret, so there isn't a small gap between the strings and the fretboard. I will leave it for a few weeks to settle before deciding to do anything with the truss rod with the supplied key. In fact I might just leave it as it is as it plays perfectly well as it is.

So the outcome is that I'm very happy with the guitar. For the money paid for the guitar, and the service I received, I have to give it 10 out of 10 - I would give it more if it was mathematically possible!

This is my 3rd Harley Benton guitar the others are a Big Tone, and a CST 24T and I love them both - they are my 'go to' guitars. I'm now going to get rid of some of my other guitars, (I have 10 electrics and 4 acoustics), to make room for some more HB's. My only complaint with HB guitars is the HB logo - I wish they would use just one design.

Update After One Week
I have played the guitar pretty much constantly for 7 days and I have found it is a really good quality guitar. The bassy sound I mentioned above seems to have disappeared so I think I have either got used to it or the guitar has acclimatized to the English weather. Whatever the reason, the sound is really distinct, resonant and loud.

The action I mentioned before, (the strings being a bit high), does not bother me at all - in fact I have come to like them as they are. I have adjusted the truss rod by loosening it to give it a very, very slight bow, so that is now OK.

Apart from the truss rod, (which I didn't really needed to alter), this has been the first guitar I have ever bought that did not need lots of adjusting to get it to my liking. It's a fantastic guitar for the money, and the fast delivery was the icing on the cake.
Auttava · Ei ole auttava · Raportoi ongelmasta
Raportoi ongelmasta... 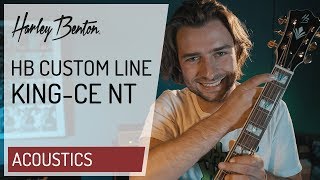 Näytä kaikki
Acoustic Guitars
The steel-strung acoustic guitar has a range of sounds that are unmistakeable and not easily replicated with any other type of guitar.
Näytä kaikki
Guitar Setups
The range of available guitars and amps has never been greater than it is today, and a huge variety of sounds are easily accessible.
2:11
Näytä kaikki
Thomann TV
Harley Benton HB Custom Line King-CE NT
testitulokset:
Lue arvostelu