Bursting with character
Zoë, 02.06.2013
Spring reverb is NOT like pristine digital reverb. Don't get it for that, but do get it. When added to the end of a patch, you can use it as a strange, otherworldly, organic reverb that leaves a metal taste in your mouth. But this is a modular synthesiser, so you're not confined to that. You can instead put it before the VCA, which stops it being reverb and starts it being a strange little creature that makes your patch sound more organic or real-world in a way that's hard to identify. It stops sounding like a synthesiser and starts sounding like a weird thing that might physically exist. In short, it introduces some complicated real-world physics into the mix.

So let's look at this particular spring reverb by Doepfer. The build quality isn't great, and it might benefit from a little re-soldering. If you're into modular synths, which are a pretty niche market, this probably won't be too difficult for you. It works just fine straight out of the box, but looks like you need to treat it carefully if you're not confident repairing it yourself later down the line.

Having said that, the features are great. The "emphasis" knob EQs the midrange, I believe, making it sound brighter if need be. As well as the regular inputs and outputs, there are extra ones for the feedback loop, so you can amplify the signal to lengthen the tail, filter it with any filter you already have, and so on. These simple features make it very open ended.

I also hear it's pretty easy to swap out the reverb tank -- the physical spring reverb in a metal case, that you plug into the main module -- for a different one, should you want to, for even more possibilities. Personally, though, I haven't found the need: this module is already providing me with so many things to try out, that I've still only begun to scratch the surface.

Spring reverb in general has a very distinctive sound, so check out some examples online before you decide whether this is for you. Personally, I'm making it a big part of the latest evolution of my signature sound.
Útil · Poco útil · Reportar evaluación
Reportar evaluación...

Uso Características Sonido Fabricación
Inaccurate Description & Noisy
Hermanator, 13.07.2021
The depth of this unit with the included Audio cables are well over 80mm, even though the PCB itself measures about 50mm. This is a misrepresentation of module depth and causes it to be unusable, unless you want to invest more money or void the warranty. Additionally, the white noise (not the hum) the reverb tank picks up while inside the case is as loud as the effect itself. I like my other Doepfer modules, but this is one to skip, unless you want a large, white noise generating module for cheap. The Doepfer tank is about twice the size of the module itself. If you have a Mantis, skiff, or most modern portable cases, skip it. I LOVE the Intellijel Springray in comparison; its tank is about the size of the module & is noise-free in the same location + more features.
Útil · Poco útil · Reportar evaluación
Reportar evaluación...

Dark, muddy and brooding
Martyn Q., 01.10.2015
The a199 has a lovely dark spring sound, the provided spring tank is a great match and starting point for a collection of tanks. Spring reverb is not the clean realistic sound associated with reverbs today - its clangorous, shonky and unmistakably mechanical in nature. The A199 is slightly l less feature filled than some other spring reverb modules available (no vc of feedback amount or wet/dry mix, no tank selection etc - all easily patchable though) - but a fraction of the cost. Follow the mounting instructions carefully to avoid unwanted artifacts (they are very susceptible to interference) - I've opted for keeping the tanks out of the case. You may consider also buying a decent external phono switch so you can have multiple tanks linked to the unit at once - saves popping the module out to change tanks.

I love playing with the feedback path of the a199 - it can even play self patched, great for drones... A typical drone patch for me would go:

A199 with no audio being fed to it, high feedback -> feedback insert goes to a vca -> A189-1 bit mangler -> Freqshifter -> A106-5 sem filter -> feedback return of the A199. Modulate away on the modules in the feedback path and the results are stunning - so organic, dark and ethereal.

I also like using it to add body to drum sounds or synthesised pianos, keep feedback low and run the mix output to a vca to shape the level contour.
Útil · Poco útil · Reportar evaluación
Reportar evaluación...

Uso Características Sonido Fabricación
Could be great
Philip3830, 17.05.2021
When I bought this I read about the hiss and noise of the module/tank combination. Others said that placement made a huge difference and that by moving it to a certain magic spot the noise would disappear. I never found the magic spot and the noise ruins for me what otherwise would be a lovely module. I read that Doepfer issued them with poor quality RCA cables and that if they are changed that it can be significantly improved.
Pros - the effect is lovely, the module is well built and has good options for output of treated sound. Physical interaction with the tank itself also creates new options.
Cons - unwanted hiss and noise, placing the tank outside the modular case means an unsightly opening and long cable, putting it inside the case may mean no ability to control the noise. In my case the latter option was not possible as the case is too small.
Útil · Poco útil · Reportar evaluación
Reportar evaluación... 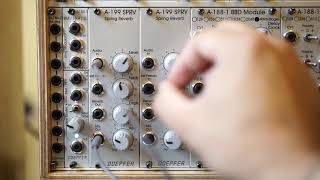 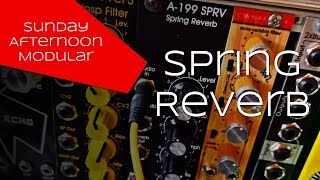 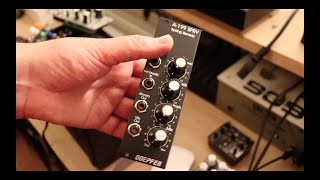 Mostrar todas
Tuto­rial: How to set up the Doepfer A-199 SPRV Spring Reverb
Dasero 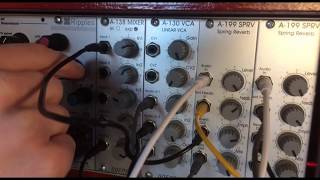 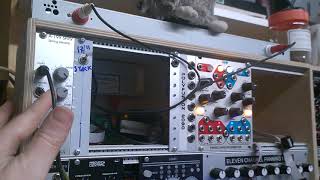