Where to start.. Class D amps.. So amp's come in basically 3 types, Tube, Solid State, and Class D. Tube amps have that nice warm tone and gorgeous sounding harmonic distortion, breakup and compression, plus there loud for the watts, but unfortunately cost a fortune. Solid State amps tend to just have raw power and balls once you get up there in the watts, but sound a bit sterile compared to tubes. Class D or digital amps always sound incredibly detailed but cold and sterile to my ears, they tend to put out what you put in without warming anything up or rounding off the bad edges. Also 200 Watts Class D is volume wise about the same as a 30-50 watt tube amp. But as this was for a second guitar rig using some preamps, a G Major FX and a Harley Benton 2x12 Vintage Cab I already owned I didn't want to be shelling out $600-$1000+ on a tube amp, well not at the moment.

Initially I had some problems dialing in a good tone, I think the amp probably needed some run in time to take out a little new amp harshness, and while it didnt sound like a cheap $200 combo when I had a solid state preamp hooked up it, it wasn't doing it for me it tone wise. Solid State preamp and Class D power amp, probably not a good way to go :(

Next up I hooked up a 20 year old Digitech tube preamp, with a bit of EQ tweaking and a OCD clone as a boost I was happily rocking out thinking this sounds pretty good.

Then 2 days ago the AMT SS-10 I ordered turned up. OMG, chimey cleans, gorgeous slight blues breakup, and the crunch / high gain have a great tube compression, and it sounds almost as if there's some power tube breakup and sag going on in the tone. I was in guitar nirvana gurning away like an idiot. After I finished playing Van Halen's "Panama" solo I thought "damn my playing doesn't usually sound that good".

A couple of other things...

* I did A/B it against a blackstar HT5 power stage a few weeks back and the HT5 sounded flat and muddy in comparison.
* It's not hugely loud. I dont know if it would run stereo 4x12 cabs at gig volume, but in bridged mode it should be fine for a single 4x12.
* What's with the dodgy cheap knobs Thomann? It feels like they are glued on too :(
* The tone pot values are a bit too sensitive as well, 10 to 2 o'clock is about all that's usable.
* If you're thinking about getting one of these.. I did try running the 2x12 cab in stereo , but I was getting some weird phase cancellation, probably due to stereo FX.
* Very light.
* Runs cold.
* If you have a high end ( or new model ) modeler this would probably work very well to, unfortunately I don't have any good modeling gear anymore to test with.

I was planing on replacing this with a 20 Watt tube amp when I had the cash, but if my feelings about the ATM don't change, and I don't end up putting the AMT in my main rig, I don't think I'll bother... Great inexpensive power amp if you have a good front end \m/
Helpful · Not helpful · Report
Report rating…

Send report
features quality sound handling
Simple amp, easy to use and very loud!
bazbishop, 26.11.2019
The GPA-400 has everything you need from a power amp, especially if you carry it around a lot. At only 3kg, it is so light that it makes travelling to gigs super easy.
There are two channels, each with two speaker connections (jack plugs), so simple and straight forward. The resonance and presence are effectively tone controls, similar to bass and upper mid - I know electronics experts will cringe about this description, but that's pretty much how they work. They can be quite handy for balancing up the tone of slightly different speaker boxes.
There is a push-button mute switch on the front, signal indicators and red clipping LEDs. I never got these to light up, because it is so devastatingly loud, I was frankly too scared.
The sound is clean, really really clean and the high frequencies can be a little bit shrill, but this can be mostly accommodated by EQ in the pre-amp.

So to summarise, a cheap, sturdily built, very light, tremendously loud power amp. It will not sound like an over-driven valve power stage (which will weigh ten times as much), but it will accurately reproduce anything your amp modelling effects unit delivers to it.
For the price, this is an excellent buy.
Helpful · Not helpful · Report
Report rating…

Send report
features quality sound handling
Harley Benton GPA-400
SMFker, 09.09.2020
Rehearsals, playing live, top performance, not heavy at all,
Fine amp for the price, I never pushed to hard, I dint have the need, it has enought volume for my thing, I play Jazz and Fusion, clear transparent sound, I used with Helix in Stereo and mono set up, I do not need anything else to amplify my guitar tone, want to buy another, just to have it as spare one, great purchase, no negatieve punten.
Helpful · Not helpful · Report
Report rating…

Send report
features quality sound handling
My first power amplifier.
Artie52, 19.09.2020
Why i ordered this Power Amp?
Very shortly - I was rehearsing with Line6 Amp trough my Line6 POD HD 500X preamp and Harley Benton 4x12 cab and the sound wasn't that good because of Line6 amp, so I decided to replace it with this HB Power Amp.
Now how it sounds?
It sounds very good, i am really satisfied with the result i got.
Features?
Well... it is Power Amp, there is not much of it. But! There is one and very useful feature, where you can connect two outputs (Stereo) and inputs at the same time! It is very useful if your second guitarist does not have any Amp/Power Amp.
About quality...
When I received this Power Amp, it had small plastic piece of something inside just lying around inside and making noise when I moved it. I don't know where it came from, but all the elements inside were not damaged.
Helpful · Not helpful · Report
Report rating…

Guitar Amps
The following pages give an overview of the various types of guitar amp available.
Free Downloads 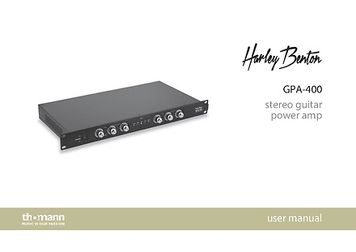 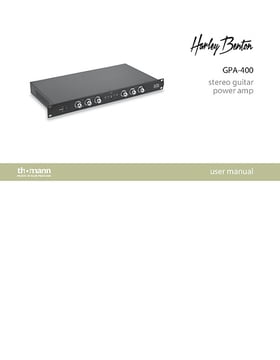