Though ‘metal’ is nowadays a rather broad category encompassing many discrete styles, most of our observations here cover the whole range, as the basic requirements are the same - high gain and high volume!

There is no precise dividing line between heavy rock and metal, in sonic terms at least. Early metal bands simply went one stage further than the heavy rock bands of the Seventies by turning up louder, using more distortion and playing harder and faster. Consequently the gear used in the early days was more or less the same.

The Strat and Les Paul each offered advantages to early heavy rock/metal players, and it was only a matter of time before players and designers would conspire to combine the high output of humbuckers with the expressive potential of a whammy bar - ‘Superstrat’ describes a Strat-style guitar with at least one humbucker. The Fender tremolo, though radical in its day, was not really designed for the sort of antics that metal players were getting into by the late Seventies and early Eighties. The Floyd Rose tremolo, introduced around this time, offers greatly improved tuning stability and the ability to bend both up and down. A Floyd Rose-equipped Superstrat became the weapon of choice for metal-merchants, and a number of guitar manufacturers appeared as if from nowhere to claim territory that Gibson and Fender were a little slow to identify, the big names being Charvel/Jackson, ESP and of course BC Rich. The latter company’s designs are possibly the most iconic metal guitars, with their rather rude shapes and even ruder names. Ibanez catered for the needs of the more sophisticated metal player, and have long been identified with virtuosos such as Steve Vai and Joe Satriani.

Paul Reed Smith guitars combine the best of the Gibson and Fender traditions with guitars that have set new standards in build quality, versatility and choice of sounds. Though not cheap, and originally aimed at a rather different type of guitarist, PRS guitars are highly popular with American nu-metal players.

This is one style where combos don’t usually make enough noise to compete. A metal player needs to hold his own against shrieking vocals and pounding drums, often including very large crash cymbals and a double kick-drum pedal. Metal audiences have come to expect a wall of sound that can be felt as well as heard - to this end a 100W stack with two 4x12” cabs has become the norm, even for relatively small venues.

The venerable Marshall stack is still a popular choice, but other companies have specifically targeted the metal scene. The most significant of these is undoubtedly Mesa-Boogie, whose ‘Dual Rectifier’ valve heads have a sound which, though firmly in the Marshall tradition is a little more ‘processed’, but also more aggressive and simultaneously clearer - heavy distortion with less ‘surface fuzz’, in a sense. This is the dominant sound of nu-metal.

Though having the correct basic sound will cover most of the ground in heavy metal, a few effects are specifically associated with the style, and often employed for solos and instrumental sections. ‘Flanging’ and ‘phasing’ are particularly effective when used on clean sounds for intros and verse patterns - without some effects, the contrast between clean and fully distorted sounds can be a little too extreme.

The ‘octaver’ effect is also generally associated with heavy metal. This is a pitch shifter which produces the effect of playing in octaves from a single note or chord. When combined with distortion, the effect is big and thick. ‘Pitch shifting’ in general can also be used to enable one player to replicate the ‘twin lead’ sound of Thin Lizzy or Iron Maiden, particularly the more sophisticated ‘intelligent’ pitch shifters which vary the interval they produce to give diatonic harmonies in a specific key or mode. 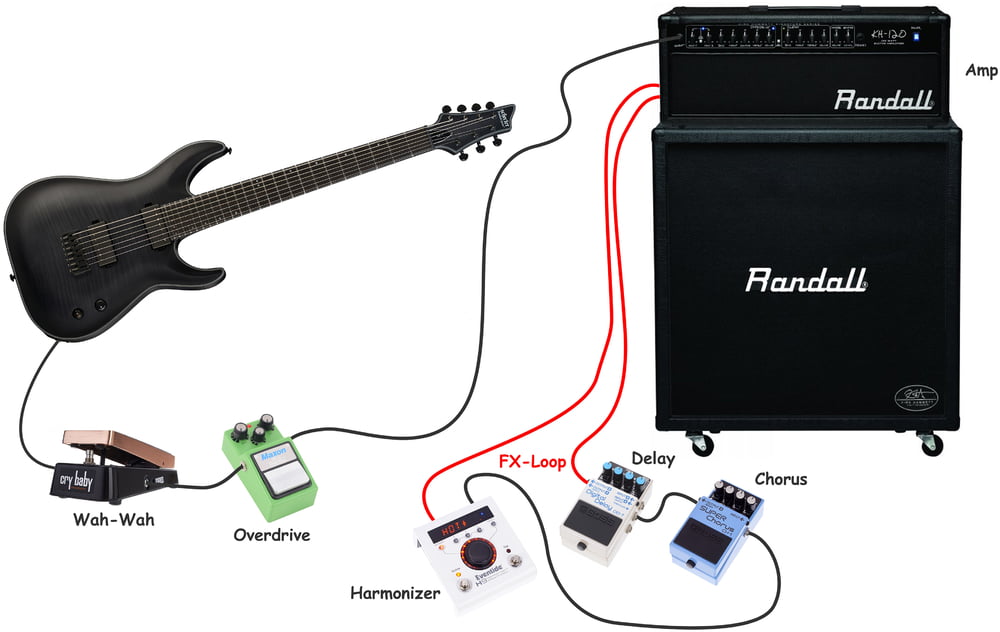