tulajdonsagok hangzás kivitelezés
A Brilliant Buy
chrisalis, 11.03.2020
I must say that my first and overall reaction on receiving this guitar was one of pleasant surprise. There has been much written about this particular Harley Benton but I wanted to make my own mind up and tried to be objective as I could. I would add modestly that my guitars are all top notch models from premium makers so my bar is set high. What is undeniable is that a so called ‘budget’ guitar has been taken to another level. The wood on the particular guitar I received is excellent. The fit and finish of the component parts impeccable. My tuners are all good and functioned without fault with no issues whatsoever. The pots turned evenly and the selector switch had good resistance. I was surprised too at the fair quality of the hardware. Not perhaps the best money can buy but far from being cheap and nasty that would need immediate replacement.. In respect of the neck, arguably the most important part of any guitar, all good. In fact very good indeed. The profile is more of a medium u shape. The frets were installed perfectly with no low or high spots anywhere on my fretboard. My example played perfectly straight out of the box. Some people may wish to polish the frets but this is a personal thing and not a criticism and on my example certainly not necessary. Perhaps I may give them them a light polish when I eventually need to change the strings. The strings were D’addario 9’s and in perfectly new condition without a sign of rust and rang clear and true. I had a new set ready to install but was simply not necessary. I was impressed by the resonance that I could feel vibrate through the ash body of this guitar. I would add that thought that the action at the factory had been set a little high for my personal preference. I used my allen key and lowered the six saddle screws one complete anti clockwise turn and now for me, was much better. I will fine tune this when I get the time. I’ve read that the TE-52 is heavy but I certainly don’t find this. Certainly not light but prohibitively heavy? No.
I am not going to comment with regards pickups as this is purely subjective and with so many variables. Many purchasers of this guitar will certainly keep the stock pickups and many may change. Voila!
This is a good guitar. I get the impression that perhaps Thomanns have been sensitive to previous criticisms of Harley Benton guitars and have taken these on board and have resolved them with the factory and as I said before, bringing ‘budget’ guitars to another level.
Hasznos · Nem hasznos · Jelentem!
Értékelés jelentése...

tulajdonsagok hangzás kivitelezés
TE-52 NA Vintage Series
micoli, 30.10.2017
The sound of Telecasters has never really impressed me but I just wanted one to fill a gap in my collection, which is mainly hollow bodied, (with the exception of a Tokai strat). I play as a hobby so my guitars never leave the house and I really don't demand top-class instruments, although I would certainly be happy to own one! I first researched the options from different makes and suppliers but wasn't impressed with what was on offer for the £200 mark. As I've bought Harley Benton's before, I was confident I could find a Tele at the right price. After comparing them I ordered the TE-52 but to be honest, at just £122 including delivery, my expectations were not that high, despite glowing reviews on the Thomann site and on YouTube. After all, it's a guitar that sells for £113! It was ordered on a Friday evening and received in the UK on Wednesday at 10:00am, tracked all the way.

My first impression was that this was a stunning looking and a very well made guitar. When I checked it over and played it this is what I found:

~ There were no blemishes on the finish and it was pretty perfect.
~ The neck relief was perfect with the strings just sitting above the frets at the 7th fret.
~ The intonation was perfect on 4 strings and slightly off on the D & G strings, which took 30 seconds to put right.
~ The body looks like a 2 piece body, judging from the join at the base.
~ The neck looks like a one piece neck.
~ The dot markers are sitting central on the edge of the fretboard.
~ There was no shielding inside the control panel, pickups and jack socket.
~ The tuners are fine and hold the strings in tune, but I do find there is some slack spots in them,
~ The control panel is 34mm wide so buying a new control panel would be hard to find, (the American version is 32mm).
~ The pickguard is also not a standard American size so it would be harder to find a replacement, to align the 8 screw holes and have a 34mm gap for the control plate.
~ The cavity at the neck position beneath the pickguard is large enough to fit a humbucker or mini-humbucker at the neck. So if you want a new pickup set-up you will need to find the Asian version of the pickguard, (see above).
~ The C shaped neck plays like a dream.
~ The nut is plastic.
~ The neck was seated into the body perfectly, with not the slightest gap.
~ The Roswell pickups sound good enough to me to keep them in the guitar.
~ The guitar strings were slightly corroded.
~ The frets were not polished - so initially no string bending!

I have had the guitar just over one week and I have replaced the bridge and saddles with the Wilkinson compensated brass version. I was just going to replace the saddles but thought it easier to replace the whole bridge. This upgrade isn't really needed but I like my guitars 'just so'. It has had an effect on the sound and it has now, to my ears at any rate, more of a Telecaster 'twang' . While I was at it, I also shielded all the cavities with black shielding paint and replaced the string trees with roller string trees. I fitted a bone nut which was re-cut to eliminate the sharps on the first fret. The strings were initially cleaned up with some WD40 on kitchen towel, which worked fine, but I put another set of 9's on when I replace the bridge. I polished the frets at the same time. If anything the tuners could be replaced, but at a much later time.

This guitar far exceeded my expectations. It's great looking and it was playable straight out of the box. The quality is amazing for the the price paid - if it was twice the price it would still be good value. There are some very small faults but nothing that can't very easily be put right. Most new guitars need properly setting up but this one didn't. Although I fiddled around with it to get it playing exactly how I like it, my upgrades were not really necessary but for the cost involved, I think they are an improvement.

This is my 4th Harley Benton. I've never had anything except the smallest problem with the build quality on HB guitars and this one is about the best I've ever had. So, from being indifferent to Telecasters I am now a convert and I really love this guitar. It's great value and a great player.
Hasznos · Nem hasznos · Jelentem!
Értékelés jelentése... 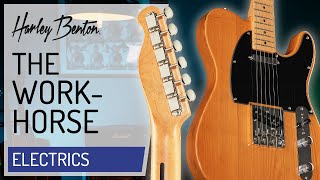 Mutasd meg mindet
E-Guitars
Electric guitars are ten a penny and nowadays there are at least as many models and makers to choose from.
Mutasd meg mindet
Guitar Setups
The range of available guitars and amps has never been greater than it is today, and a huge variety of sounds are easily accessible.
teszteredmények
Elolvasom a tesztet