Effects Pedal for Guitar and Bass

tulajdonsagok kivitelezés
Switchblade plus
Eurospace, 03.12.2013
Just like the TARDIS, the Switchblade + is smaller on the outside. Very small indeed. Some might find it too small - I'd say try it first. It is robustly built in the typical EH die-cast case, with bright LEDs and conveniently placed foot switches and promptly labelled ins and outs.

The Switchblade is a channel selector - it sends the input signal to channel A, B, or both. There's a tuner output as well - if you don't need to connect a tuner, you can use this to output a separate channel; however, be warned that it bypasses the Switchblade and cannot be switched on or off.

The left foot switch toggles between output A and B. The right switch runs both outputs in parallel. When the right foot switch is engaged, the left one is disabled, which makes sense.

The unit is completely passive and works without electricity. The LEDs, though, need juice to show what's on and what's off. They consume so little that a 9V battery should last ages: EH, however, have added a DC-in socket. Nice touch, but unnecessary.

The Switchblade is true bypass, as you would expect from a product of this type.

They say it works if you reverse it (channel A and B become inputs, and the input becomes an output) but I haven't tried it.

On the whole, Switchblade + turned out exactly as I'd imagined. It isn't a unique product but does what it says on the tin and does it well. Besides, it is priced very reasonably. Recommended.
Hasznos · Nem hasznos · Jelentem!
Értékelés jelentése...

tulajdonsagok kivitelezés
Is a very good piece of gear
07.05.2016
I use it to switch between the two channels of my Fender 68 Custom Deluxe Reverb amp.

Pros
price, works as expected, i liked the switching options (A or B or A&B), size, led displays.

tulajdonsagok kivitelezés
Great price-performance item
Wilson WIlsonson, 20.06.2018
Use
I use this as a three way switch system to 2 guitar amps (A and the tuner outputs) and one bass amp (B output).

Pros:
The extra tuner output works well if you want to connect a third amp.
Relatively small size.
Good price compared to other products.
Good signal from all of the outputs.

Cons:
If a channel is switched off, there is still a weak, almost unnoticable signal that is going through (not sure if it is common for theres ones, but I have noticed the same behavior on a Fender ABY switch too).

Conclusion:
I would recommend this as a cheap alternative if there is a need for one guitar in - three amps out setup. The tuner output can be managed with the tuner pedal since it can not be turned off.
Hasznos · Nem hasznos · Jelentem!
Értékelés jelentése... 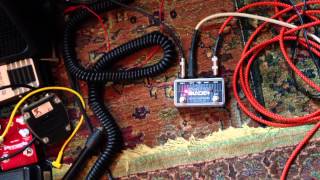 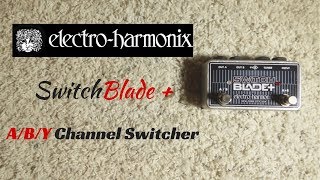 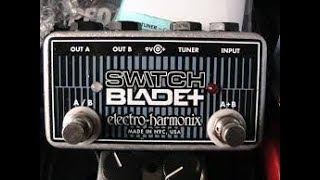 Mutasd meg mindet
How To Use 2 Amps At Once! Switch­B­lade+
Evan Kieser 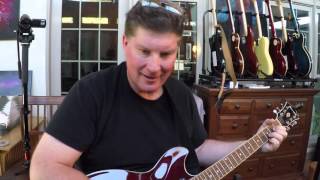