First noticeable thing is that as with any proper lead piece (which I think this is) it really helps to be in shape but I did manage to get some nice things happening and an idea of how it might respond when I'm fully in shape.

1)In comparison to the Bergeron a couple of things stand out, it's lighter. This may not be a biggy but on a light weight, very energetic horn it made me feel as though I had slightly less grip on the sound, I'm going to look into a light weight booster. It's a very different blow but not unfathomable.

2)I'm pretty sure the 7MV and the bergeron have the exact same throat and probably a very similar cup volume however, the shape of the cups are very different. Bach say the MV design is a modified V, I'd say more like a double V or double cup, not as distinct as say a Parduba but there's a distinct change in the contour of the cup from rim to throat.

3)The bach has a more open back backbore than the Bergeron. They both have a straight diverging taper but the Bach has a higher angle. This is most noticeable in supporting the upper register and on occasion last night I found myself over blowing / compressing when in actual fact it could have eased off a bit and still have nailed the passage.

4) There's more support from the Bergeron rim and I think they say say this in the marketing, that it helps to increase stamina, this is partially why I went looking for something else to try. The outer edge of the Bergeron Studio has quite a shoulder on it, I've found that in the trumpet world we now live in where there's only one of us on the gig and we are required to cover lead, jazz, section etc that I was always battling with flexibility on the Bergeron and that the wider rim was playing a part in this. It probably says more about me as player than anything else but when I used my Jazz (*ahem*) piece, an old Mt. Vernon 7C I found that I could say a lot more and be more in control of my improvising than if I were using the Bergeron.

So, that's my thoughts! I didn't compare the mouthpieces on the gig as I only wanted one option, I'm back on the same gig next week and need to put a lot more work in to be able to play the charts as they should be played, correctly and well! A wee note about the Mt. Vernon 7C pictured left. I came across it by chance and love it, I have actually been doing 70% of my practice on it (apart from last week). The Bach guys reckon they used a lot of these older pieces to fill in the gaps from the lost mandrels and tools from the older bach DAYS, the new 7MV is very close in rim but obviously a very different cup. A comment from a colleague on the gig suggested that the 7MV is very similar to the Marcinkiewicz Bobby Shew lead piece. I've only ever seen one of these and never played one but they do look similar, if Bach have produced a mouthpiece which was as popular as the Marcinkiewicz was then we may be seeing on a lot more bach mouthpieces on band stands in future than there have been recently.
Helpful · Not helpful · Report
Report rating… 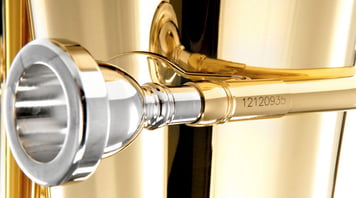 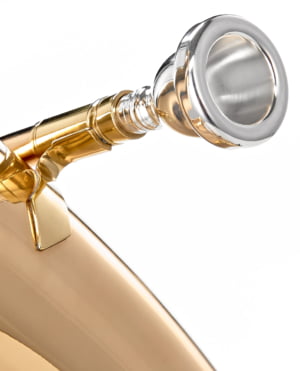