Ominaisuudet Ääni Työnjälki Käsittely
Satisfactory sound and solid construction, but...
DJ Tetei, 21.02.2021
In terms of sound, this subwoofer does the job it was designed for, but it doesn't offer a linear response on the declared frequencie range. The manufacturer does not provide details in the user manual about the speaker model used or its impedance, about the amplifier module model used and its specifications, about the maximum input signal supported or if the frequency response is measured at -3 dB or -10 dB. Also, no wiring diagram is provided. On the very low frequency range, below 40 Hz, this subwoofer will have difficulty reproducing the sound satisfactorily. The lack of specifications regarding the speaker model and the amplifier model used, as well as the lack of a wiring diagram, create difficulties in identifying the necessary spare parts in case of need. I requested additional information from the brand owner, who responded promptly, stating that the subwoofer speaker supports a power of 600 watts, at an impedance of 4 Ohm, and the amplification module delivers 800 watts. So, if you are wondering why the "Limit" LED lights up sooner than you expect, here is one of the reasons. Also, keep in mind that when you use both XLR input connectors on the subwoofer, the sensitivity of the input signal increases, and on the low frequency output circuit this signal is summed, and therefore the maximum output volume position shifts down, to about 1 o'clock. Also, you must set the input and output gain levels correctly on the mixer, equalizer or active crossover. There's a good reason for the "0 dB" marking on your level meters. The user manual specifies a peak power of 2400 watts, but some models specify the peak power differently, on some, such as the one in the photo published on the website, appears 1800 watts peak, and on others, such as the one I purchased, 3200 watt peak appears, which raises questions about the honesty of the data declared by the manufacturer and the consistency of the components used in the manufacturing process.
The box appears to be well assembled and solid, but you have to be careful during manipulation because the finishing is easyly prone to scoring.
Auttava · Ei ole auttava · Raportoi ongelmasta
Raportoi ongelmasta...

Ominaisuudet Ääni Työnjälki Käsittely
Superb for this cheap sub
Bassmonster92, 09.04.2021
bought 2x dsp18 and 2x dsx 115, together they work like a dream, relatively cheap setup, but heeey how fun they are. using in livingroom, and the odd rental gig. livingroom is loud and fun, at a gig, they are just insane for the price point. even other sound guys ask what brand it is, and gets chocked by the prise /performance.
If in doubt, just buy, you won`t regret it
Auttava · Ei ole auttava · Raportoi ongelmasta
Raportoi ongelmasta...

Ominaisuudet Ääni Työnjälki Käsittely
Great quality 18” Sub for a Good Price
Mace Sounds, 26.05.2020
The Box Pro DSP 18 is a really good subwoofer for the price of it. It had a good all black finish, with handles on each side making it easy for two people to carry.

Cons:
• only has a limited led and no protection, so I’m running them at 80%.
• quite heavy at around 40kg with no wheels, so needs two people to carry. No problem though as it has good handles.

Ominaisuudet Ääni Työnjälki Käsittely
Excellent value for money!
LiamDevlin, 05.02.2019
I now own four of these, running two each side of the stage and they sound great. for the price of these units you can't go wrong. I'm currently using them in a 650 seat theatre and they provide more than enough low end to my mix
Auttava · Ei ole auttava · Raportoi ongelmasta
Raportoi ongelmasta...

Choosing a PA System
Whether youre a fan, a promoter or a performer, the refined craft of live sound is vitally important. 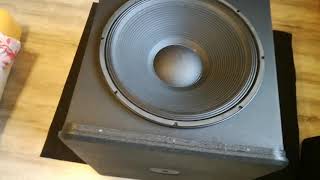 Näytä kaikki
PA Speakers
In the digital age, the loudspeaker is the last and unchangeable outpost of analogue technology.
Näytä kaikki
Choosing a PA System
Whether youre a fan, a promoter or a performer, the refined craft of live sound is vitally important.
Näytä kaikki
User manual
PDF
testitulokset:
Lue arvostelu