Ääni Työnjälki
Great crash if you're on a budget
Konstantinos A., 28.09.2017
I've tried the 16" and 17" crashes and the 10" splash from the Zultan Aja series and I must say that I've got close to no complaints considering their price.

The sound is not as refined as the expensive series from the reknown brands like Zildjian, Sabian, Paiste etc, but you can get these at a fraction of the price.
The price might make you think otherwise, but they can hold their own in a live or recording setting since they sound like actual cymbals and nothing like the cheap brass entry series and probably better than most of the cheap bronze series as well.

Now in particular about this 17" crash, I would say that it's not the loudest 17" out there, but it can get pretty loud and it can handle heavy music. It is slightly clangy when you listen to it by itself (as many cymbals do when you go up in diameter), but you wouldn't notice that in context. It doesn't sound as bright as a 2002 or an A custom, but I'd say it leans towards the brighter side of the spectrum (I wouldn't call it dark).

As for pairing, I would probably choose the 18" to pair with the 16" I already had since this 17" is kinda close with the 16". They work together, but I would prefer a more distinguishable difference.

Finally, durability-wise, it seems to be holding up quite well after 1,5 years and keep in mind that its main use is in live settings and rehearsals by many different drummers. It doesn't get a daily beating, but it has seen some heavy use for certain and it's made more money than it cost.

Ääni Työnjälki
Amazing high quality crash
dabrorius, 14.02.2019
I play this crash and it's 16 inch version exclusively for the last two years. Both for rehearsals and gigs, in a bit heavier setting (hard rock/metal music). They sound amazing and are holding up great, definitely a much better value for money then cymbals from bigger brands in similar price range.
Auttava · Ei ole auttava · Raportoi ongelmasta
Raportoi ongelmasta... 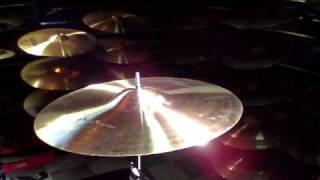 Näytä kaikki
Cymbals
The choice of cymbals is just as important as the choice of drums within a kit. Lets take a closer look.
testitulokset:
Lue arvostelu