360° view
Please activate your javascript. You’re currently missing out on our lovely designed product gallery and its useful features (zoom into the very last pixel of each picture, 360 view, videos and more). We wouldn’t miss them for the world.

The TC Electronic PolyTune Clip Black tuner combines cutting-edge tuning technology with outstanding aesthetics and functionality, which makes it the perfect tool for musicians who wish to make no compromises in terms of speed or precision when tuning their instrument. The PolyTune Clip has been designed to be a reliable partner for guitarists and bassists in any situation – whether they are quickly checking their tuning on stage or making sure everything is perfectly in tune before a recording – and offers three different tuning modes: Polyphonic tuning, which allows all strings to be tuned at once, conventional chromatic tuning, and high-precision “strobe” tuning, which offers an impressive accuracy level of ±0.02 cent. 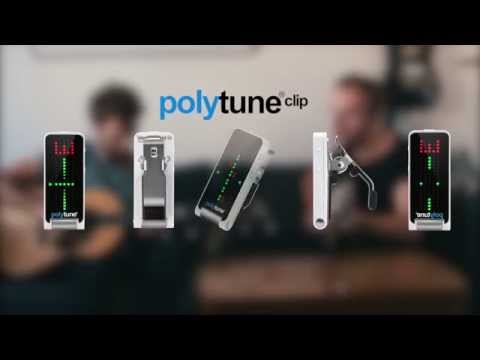 Basic electronic guitar tuners only allow the open strings to be tuned individually to standard tuning (E, A, D, G, B, and E), which is a time-consuming affair. The PolyTune Clip, on the other hand, is a chromatic tuner, which means it recognises each note and allows each string to be tuned accordingly. And that is not all: Unlike conventional tuners, the PolyTune Clip also allows all of the strings to be struck at the same time while tuning. Its highly responsive piezo sensor then rapidly analyses the pitch of each string, and the display indicates which strings need to be adjusted. The tuning process is thus made significantly faster than using conventional methods.

Discreet and perfect for continuous use

Whether you are a beginner tuning your guitar or bass every day or a professional musician who likes experimenting with alternative tunings, the PolyTune Clip will keep your instrument precisely in tune thanks to its high-speed tracking and its unique polyphonic tuning function. Despite its extremely compact dimensions, the tuner’s bright swivel-mounted LED display ensures a clear overview at all times, even in the darkest corner of the rehearsal room. Thanks to its robust stainless-steel clip, the tuner – which weighs just 32 grams – will always stay firmly seated on the instrument’s headstock and secured against accidental slippage.

The Danish company TC Electronic has been known for its innovative products for many years. It was founded in 1976 by brothers Kim and John Rishøj in Aarhus. The company first made a name for itself with the SCF, a stereo chorus/flanger pedal for guitar. Studio equipment followed during the 80s and 90s, notably the legendary TC2290 digital delay in 19-inch rack format. Since the 2000s, TC Electronic has greatly enriched the guitar and bass scene with amplifiers, cabinets, combos, and effects pedals. Here too, TC's innovative spirit is in evidence, for example with its TonePrint technology and the first polyphonic guitar tuner. TC Electronic has been part of Music Tribe since 2015.

Thanks to its light weight and swivel-mounted display, the PolyTune Clip can be attached discreetly to the headstock of virtually any stringed instrument – whether it’s an electric guitar, an acoustic instrument, a bass guitar, or even a ukulele. Its polyphonic tuning function together with its bright and easy-to-read LED display mean precise tuning takes no time at all, which is particularly valuable during live performances. What is more, musicians who regularly play in alternative tunings can always rely on the PolyTune Clip whenever they choose to venture beyond the scope of regular “standard” tuning.

RD
The *only* tuner you need (probably) Rad Dad 04.05.2017
Let's make this quite clear right at the start. This tuner is AWESOME.
Tuning really has been the bane of my life for 30 years. I'd get a string tuned - go on to the next one - all the way through the six. Every one, as I thought, 'spot on'. I'd play a chord - it just sounded so wrong! So - start again. I'd spend more time tuning than playing. And intonation?! Just don't start me on that.
Well - in one of the Harley Benton Facebook Support Groups, a chap gave a little review. Said this wee gadget was the best thing that ever happened to him. Said it 'did' intonation. I was intrigued. How could this be? It was a bit expensive - as I was used to paying less than 10 Euros for a simple clip-on tuner - but I headed on over to TC's website and had a look at the specs.
I thought I'd give it a go - Thomann's guarantee meant I could always send it back, no questions asked, if it was no good for me.
Weeeellllll. I took it out of its smart little box and pressed the small switch. Oo! It burst into life with a rather fetching moving line of green lights. "Ey up", I thought to myself "this could be good".
I clipped it on my guitar and played a note. Lights moved back and forth. A letter appeared. It was only the darn note I was playing! As I tuned the string, lights continued to move - red and green ones. Vertically and horizontally. Until...when it was spot in tune, there were just two bars of vertical green lights and a horizontal bar of green lights either side. Slightly off - even just the slightest turn of a machine head - and some red lights would appear *to one side of the bars*, showing if the note was now sharp or flat. Wow. Easy tuning...
I played another note - it again gave me the name of the note. I played an octave, to check for intonation of the E I had just tuned. Again - it gave me the name. Ever so slight red lights accompanying the green - indicating intonation would need a slight tweak. But I couldn't tell - it sounded great to me!
And wait for it.....if you play a chord...it will tell you the name of the chord (as long as it isn't too complicated). And - in this case, you get a couple of bars for Each. Of. The. Six. Strings. String in tune - green lights. Slightly out - red lights above or below the green. All six strings at once.
I really can't recommend this tuner enough. No more tuning woes. A permanent fixture, it is. Best 49 Euros I've ever spent on guitar related stuff. Who'd have thought it?
And when you're not using it - it just sits there, black as anything, like the stealthy tuning ninja it is.
Buy one you must.
features
quality
handling
9
0
Report

Lt
Near enough Lysander the Unbearable 16.01.2022
0.5 cents is near enough for most people in most circumstances. It has a clear display.
features
quality
handling
0
0
Report

M
Great design and feel but poorly made Matthew3022 27.10.2021
I love the feel and accuracy of this tuner. The first one I bought stopped working after 2 years, but I liked it enough to buy another two more. The second one stopped working after one year, and the third one now has intermittent problems. In sum, the craftsmanship is absolutely terrible, so I would not recommend this tuner.
features
quality
handling
0
0
Report

G
tc electronic PolyTune Clip Black Tuner GentleBlack 09.12.2021
Amoung several options offered to choose I'd decided for this one and I am glad because it fits my expectations
features
quality
handling
0
0
Report