Dynamic cardioid microphone for recording instruments and vocals. Its bright, clean sound and carefully contoured presence rise make it the ideal tool for live performances and studio recordings. The cardioid pickup pattern isolates the source and effectively reduces the recording of background noise. In the studio, the SM57 is ideal for recording drums, guitar, and woodwinds. The SM57 is not only the first choice for professional musicians, it has also been at the podium of the US President for over 30 years. Its outstanding performance, legendary reliability, and diversity of application make it the choice of performers, producers and engineers around the world.

All in all, it's no wonder the SM57 is considered the industry standard workhorse microphone - can't go wrong with buying one (or two... or three ;) )! I've used 57s for longer than I care to admit, in various situations (both in the studio and live) and I've never been let down by one so I always highly recommend them!
Helpful · Not helpful · Report
Report rating…

Send report
features sound quality
It's a 57
nicouou, 16.10.2020
I mean, what more can you say.
It's a workhorse and it's sound really good. Also works well on vocals with the optional A2WS pop-stopper.

The way this mic handles low-end, I much prefer to the SM58 for vocals. The 58 gets a lot more boomy when you get close. The 57 handles this much better in my opinion.

Despite the 57 and 58 having the exact same capsule, they sound quite distinctly different. Both good, tho.

And it's build like a tank. I do live audio, primarily. This thing is just a go-to. And I've never experienced one malfunction, in spite of how roughly stage gear is handled.
We expect our gear to hold up the "abuse," and this mic certainly does that.

And it's compact enough to easily fit 2 of these, plus the mic clips in a single mic bag.
Helpful · Not helpful · Report
Report rating…

Send report
features sound quality
Industry standard, but not for 2020
Edgar Blackdagger, 16.04.2020
It is what it is, you stumble upon it everywhere and it used to be convenient for any occasion, but it's not the 90s anymore, it's got medium output, not great side and back rejection and off-axis colorartion and its frequency responce is full of peaks and drops.
For me nowadays it should be considered as just a character mic if you want the sound of the '80s and '90s, nothing bad with that, but it's not that miraculous mic you hear about, at least not for today's standards.

I much prefer my Sontronics Solo for smooth and accurate sound capturing, and for character Sennheiser e845s, lower output but the gurthiest, yet spanky bass and guitar cab sounds, the best low mids I've ever come across.
Helpful · Not helpful · Report
Report rating…

Send report
features sound quality
Awesome Mic
Paaf, 26.06.2020
Use :
I use it mainly to record guitars and sing, it is very polyvalent and does what I expect from it. Can only recommend it!

I don't use it everyday but all I can say is that it is perfect for almost any kind of recording.

I did not have a big budget but I needed a mic to record guitar and voices. So I chose to buy the Sure SM57 LC and I am really not disapointed. Very versatile. not much more to say.

Pros
It is extremely polyvalent so you can use it with almost everything, it is small. I bought in a bundle with a stand. Everything is quite sturdy. It is the first mic I buy so I can't compare with others bit I am entirely satisfied with it.

Cons
Nothing much to say, of course you can get mics for a specific purpose but for the price, this one is really perfect if you only want to buy one mic. It is a bit heavy but it's okay.

If you hesitate, do not, you will for sure not regret buying it as it is one of the best mic you can find for this price!
Helpful · Not helpful · Report
Report rating…

Recording E-Guitars
Our aim is to explain the basic process of recording the electric guitar!
Free downloads 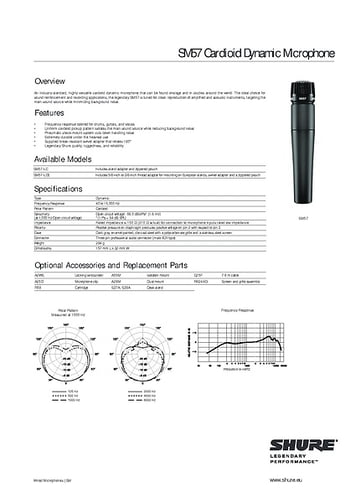 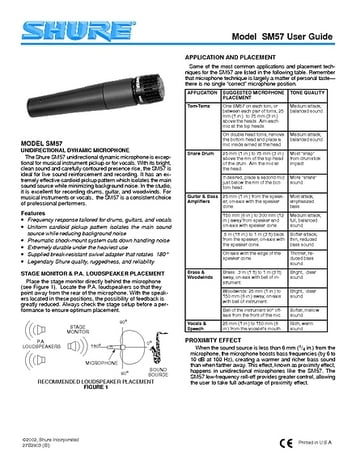 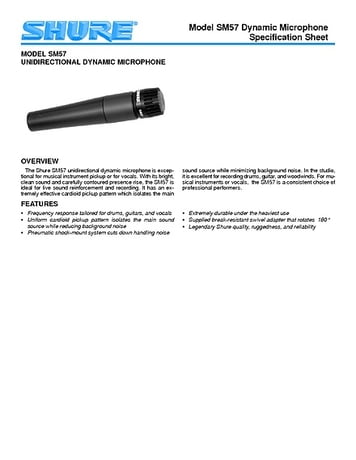 Show all
Recording E-Guitars
Our aim is to explain the basic process of recording the electric guitar! 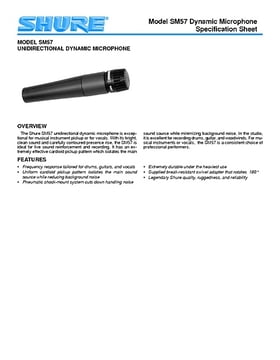 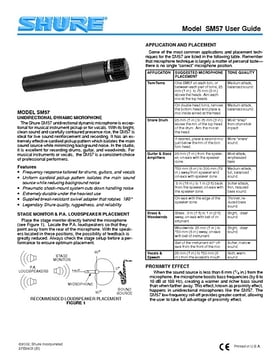 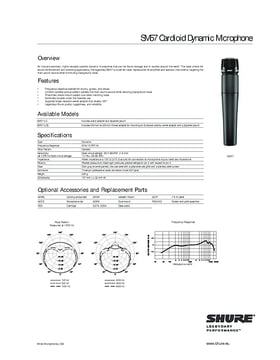