Now, for those who want that classic rock sound - this might not be the best cabinet as the sound is a little shallow in regards to the mid range and as a result of which I tend to crank the mid control on my amp to 10 most of the time. While the sound I get satisfies me , it might not suit those who like a naturally raspier sound.

Overall, scolding this cabinet would be very silly as it costs so little and is of such surprisingly fine craftsmanship. The only letdown is that I wish that the speakers had a more pronounced mid range and that the tolex be a little tougher, but then again, at the price given it is more than understandable. Other than that it is pretty much flawless, got exactly what I expected in a sturdier package that I hoped to get!

EDIT: I've now had this cab for over two years, gigging and recording, and I'd like to retract my previous statement that it's not suitable for classic rock. I've been playing through a Bugera 1960 (which is basically a Plexi) for the past year and a half, and it sounds sublime, from Hendrix and Robert Trower to Bill Frisell to Van Halen. As for the midrange, it works great with the plexi-copy, tames those mids and ice-picky highs. Great and reliable cab!
Helpful · Not helpful · Report
Report rating…

Send report
features sound quality
Best bang-for-buck ever if you need a 2x12 cab
Hilario G., 23.11.2013
This is the cheaper version of the Harley Benton G212 Vintage 2x12” cabinet for guitar amplifiers. The price is slightly lower and the reason for this is the manufacturer's choice of two 12” generic, Chinese made speakers rather than the more expensive, albeit also made in China by Celestion, Vintage 30 speakers. For what is, I very much doubt there is a better priced guitar cabinet in the market. Anything else available is either a much worse product or simply a more expensive product.
The parcel in which I received the cab was very well packaged and made its journey from Germany to the north of England in perfect condition. The box felt rock solid and the cabinet contained inside the boxt felt really sturdy straight away as well.
The G212 cabinet looked truly professional. It did not look or felt much different from a previous Mesa cabinet I bought a few years ago. To be fair, when I placed the order, I worried about being disappointed when I had the product in front of me but I could not more wrong as the cab that I had received looked as good as I thought and more.
Specs wise, the mono/stereo switch is a really useful addition, the black tolex seems hardwearing enough and handles feel strong and inspire confidence. The front panel is attached to the chassis by some extremely strong Velcro. I could not resist pulling the front grille cloth off and have a peep inside: the 8 ohm speakers look well-built although they carry no logo whatsoever so their origin is unknown. Still, I believe they must be made in China to keep costs to a minimum without compromising quality. The wood is indeed thick, decent looking plywood and there is even some padding inside to improve the tone.
I tried the cab with a JTM45-ish amp head and the tone was powerful and focused. From what I could see from my quick inspection, the speakers themselves are not badly built and the tone is indeed very similar to the new Chinese Celestion G12T-75 speakers. They are brilliant for metal styles for sure. For ‘softer’ styles you might prefer the Vintage version with Celestion Vintage30s, though.
All in all, I am very satisfied with a great quality product that is certainly well-priced.
Helpful · Not helpful · Report
Report rating…

Send report
features sound quality
Great Cab
Bacoanire, 15.01.2020
As many others have said its a great cab, not just for the price. The mono/stereo switching is nice to have. I bought this cab with the intention of replacing the speakers. The only complaint I have is that getting the old speakers out was a headache. The use nuts with nylon to lock them in place. This is nice if you are keeping it stock as it keeps the speaker from shaking loose. However, the nut held on to the bolt too tightly so that when turning the nut, the bolt would simply spin with it. You cannot access the bolt head without removing the grill cloth. So I had to damage the bolt using vice grips to get the nut off. It was a hassle but I eventually did get the speaker out and I rethreaded the bolt and replaced the nut with a normal one. Not what I was expecting but for the price, I can forgive this. I put V-Types in and it sounds great. Seems solid. Not too heavy. How they can make these things and ship them to US for $130+33, I'll never know. But I am thankful. I do think they should consider selling a speakerless version as I imagine many replace the speakers. The stock speakers are ok. Compared to good Celestions you can really hear they are not great. But the cab is quite good and well worth the price. I recommend V-types as a great all around speaker btw. Cheaper but more balanced than their siblings.
Helpful · Not helpful · Report
Report rating…

Only con i would say with it is it doesnt have a removeable speaker baffle like the celestion loaded model.

Guitar Amp Heads
Though there are other options, the stack remains a rock icon, and is still the most flexible form of guitar amplification.
Free Downloads 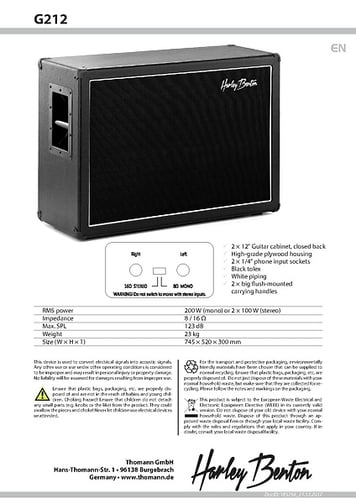