ljud hantverkskvalitet
Awesome, responsive, subtle, classy hi hat!! Highly recommended
stevedrummer5, 26.08.2015
Wow, am very impressed with this hi-hat! I work as a pro drummer, mainly playing funk, soul, hip hop and drum 'n' bass, and find most hi-hats far too thick, clunky and loud, especially when played open. I used to have the Paiste Alpha (basically budget version of this) which was good so I took a chance and splashed out more than I'd normally spend on this and it paid off, am thrilled with it! It is nice and thin, making it very responsive, and sit nicely in the mix, sensitively, and not overly cutting through over the kick, snare and other instruments, making it a great all - rounder for 'cleaner' music. If I'm honest I don't think this is really for rock guys as it's probably too quiet.

This is most I've spent on a hi-hat, and I don't regret it, highly recommended!!
Hjälpsam · Inte hjälpsamt · Anmäl recension
Rapportera betyg

14" Hi-Hat MediumA good all-round hi-hat which has a warm, soft sound and a solid "chick" as well as a defined stick sound. Good for low to medium volume. Paiste 2002 series, Designed for live...

14" "Heavy" Hi-Hat Heavier than the medium, with a brighter and stronger sound. Higher pitch, with a more powerful stick sound and great projection. Suitable for high-volume playing. Paiste 2002... 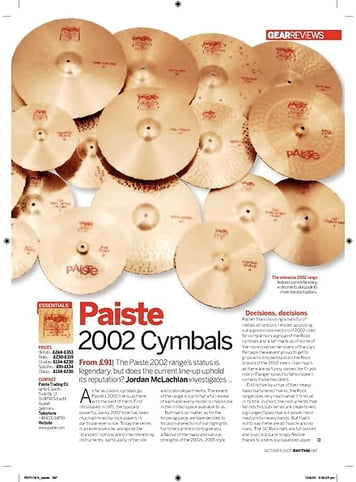 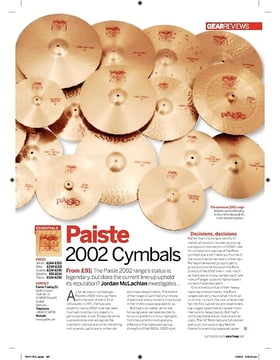