Caracteristici Sunet Măiestrie
Unbeleivable sound quality and volume
15.06.2014
I've used these speakers for a variety of uses, and they've never been a disappointment. In my studio they make excellent monitors, providing clear, distinct sound at a range of volumes. On stage they can be used as traditional floor monitors (taking a feed from the mixing desk), or you can use the 'in' and 'thru' sockets to connect just your own microphone to the speaker and then thru to the mixing desk. This only gives you your own vocal in the foldback (but often that's all you need). I have some of the 15" versions of these for PA use and for playing keyboards, but in a tight space gig I've played keyboard through one of these 8"s (instead of one of the 15"s), and to be honest I didn't really notice the difference. I've also used these as a small PA for a 2 or 3 piece acoustic gig. With so many uses, every musician should have a pair of these.
De ajutor · De nici un ajutor · semnaleaza un abuz
Raportează evaluarea…

Caracteristici Sunet Măiestrie
pretty good.
Peter R. 438, 18.02.2020
I am usually with much bigger sound equip, but recently doing smaller solo venues, have decided to downsize. This little speaker (just one as main) on a one & 1/2 meter high stand really works well, filling a room plus 20 or 30 audience, 1/2 standing maybe, with good strong sound and is a real space saver.
Not crispy ckean, but in a room of chatty people, crispy clean is difficult for any sound system.
I know these are usually good speakers in many ways. I have used them before and trust the reliability.
At this price, compared to other makes at this price. Im happy to own this tasty looking small speaker.
De ajutor · De nici un ajutor · semnaleaza un abuz
Raportează evaluarea…

Caracteristici Sunet Măiestrie
Nice Features but unreliable!
DimisAron, 13.06.2017
I gig and tour on small venues, cafes and bars. So I needed a compact monitor that
A) would fit in the back of my car with the rest of my equipment
B) can be easily carried from place to place

Pros:
They 're pretty well built, kinda heavy for their size but also decent sound for their price. I like the fequency response, and I dont miss anything in terms of gain. There are potensiometers at the back (bass, treble, volume), XLR input & output, a push button to choose between line or mic and another push button that puts it on standby, which is a great option.

Cons:
Would be great if they had handles cause carrying them would be much much easier.
But most imprtant is that when I bought em, I tested them for two weeks at home and everything seemed to be fine! But when I took em out on stage, problems began. At their first gig, one of them had problems with the woofer (the sound would come and go all the time). The other, after 3 gigs didnt even turn on. We replaced the element with another and it worked again but I was really dissapointed with the fact that this happened so early at that time. If all these had happened two years on the road it would make some sense but these were brand new and were really disappointing in terms of reliability!
De ajutor · De nici un ajutor · semnaleaza un abuz
Raportează evaluarea…

Caracteristici Sunet Măiestrie
The box PA108A Loudspeaker.
Stephen L. 111, 04.11.2013
Well made nice little speaker, just what I wanted for a small active foldback speaker.
No handle, but plenty of holes and bits to lift it with.
They go nice and loud for the're size, my only problem was a discernible buzz on the output, always there irrespective of the volume setting, making them unsuitable for FOH use in a small very quiet enviroment.
De ajutor · De nici un ajutor · semnaleaza un abuz
Raportează evaluarea…

Choosing a PA System
Whether youre a fan, a promoter or a performer, the refined craft of live sound is vitally important.
descarcare gratuita 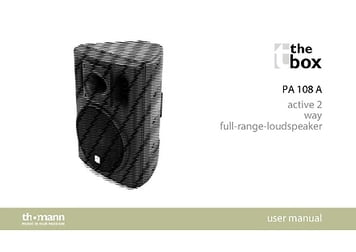 Manual
Afișează tot
PA Speakers
In the digital age, the loudspeaker is the last and unchangeable outpost of analogue technology.
Afișează tot
Choosing a PA System
Whether youre a fan, a promoter or a performer, the refined craft of live sound is vitally important.
Afișează tot
Manual
PDF
rezultatele testelor:
Citeste recenzia