Manipulare Caracteristici Sunet Măiestrie
A very decent monitor for Edrummer's for not a lot of money.
Walts, 11.01.2019
I really feel the need to address some points made very unfairly in a previous (sour grapes) review that could bias some people unjustly.
The standby feature on these monitors is just that! A standby feature! It wont light up when you plug the monitor in, it's not supposed to! The standby light comes on when the monitor is plugged in and turned on, but hasn't received an input signal for an hour. It is there to allow the unit to remain plugged in and powered on without consuming too much power the same as your TV, or any other electrical item with a standby feature! This units standby feature works as it should!
It is a reasonably bulky and weighty enclosure, but I like that, it gives an air of quality about it, oh, and somewhere to rest my kick tower against to stop it creeping forward, and it certainly is no where near too heavy for any normal person to carry around (the guy from the Mr. Muscles advert springs to mind here!)
Sound quality when playing my Roland TD8 through it is very good! Cymbals sound natural and a decent mid weight to the toms.
The Bass is a little light as has been mentioned in other reviews. My take on why this seems more apparent when using for an Edrum setup is this. If you turn the monitor up to a point where it is actually louder than the acoustic noise being generated from you kicking the kick pedal against the kick tower pad, then you can actually hear a decent amount of bottom end from the monitor for a kick drum. I'm quite a heavy player as I normally play an acoustic kit and need to be to cut through the racket of my band! So I do actually produce a lot of acoustic noise from my kick pad when playing. This is probably a lot louder than what you may believe, so the monitor needs to be quite loud to overcome it and start masking it with it's own sound. This again is probably another reason people say it has no bottom end, as they may not realise that what they are hearing is more acoustic noise from there kick tower being struck, than from what the monitor itself is producing if the monitor volume is set too low. I find that I have to have it at 3/4 volume before you can really start to appreciate the sound of the monitor over the acoustic sound being created kicking the pad! This volume is too loud really for me to practice for any length of time because of neighbours.
as far as the clipping issue goes, I have to drive it to close on full volume before the kick drum starts to cause clipping!
I watched a video where drum monitors were being compared before buying. (headphones are essential to really appreciate the difference in each monitor being compared)
> The Box MA120 was in the line up, and actually scored second place! It sounded great in the video, only suffering slightly less bottom end than the winner. But what you have to realise is the monitors were being recorded with high quality mic's placed directly in front of them so no acoustic clicking and thudding of the actual kit was being recorded, just the pure monitor sound. I nearly bought the MA120, but decided the 15" driver, and louder amp of the MA150 would be more beneficial. I think I made the right choice, as all this acoustic noise not demonstrated in the comparison video may well have been too much for the MA120's volume to cope with, but that is just my speculation.
So my conclusion for an Edrummer is that, if you can play loud enough for the the monitor to drown out the acoustic noise you are generating, ( which as stated, is actually a lot louder than one might actually realise!) then this monitor will sound great. If you can't, then you will be hearing more acoustic thudding from your playing of the entire kit, and not a true representation of the monitors sound, so would be pretty pointless. So if quiet practice is essential to you, you are probably better off sticking with headphones for quality sound in your ears, and just letting the neighbours suffer the loud acoustic thudding of the kit. But if you can happily drive this unit high enough to drown out that noise then it really is quite good at it's job!
De ajutor · De nici un ajutor · semnaleaza un abuz
Raportează evaluarea…

Manipulare Caracteristici Sunet Măiestrie
AWESOME!!!
Gary O., 26.06.2013
Sorry to shout but this thing is loud! Bought this along with the electronic drums and chose the 150 as it has a 15" driver. I thought that t would be better for the bass. I was not wrong. It has amazing output. I never was not loud enough. The only drawback was that I was too big to go in my car. I had to change it (the car, of course!) for one with bigger doors.

The tone on this unit is fabulous, with a good, full range and crystal clear sound all the way. It has two inputs, for mic and line and individual volume controls and overall low, mid and hi control. It also, I recall, has a line out, although never had any call to use it as I never needed to be louder. It is a heavy unit but worth the extra effort. I did add a set of castors and, maybe that would be my only suggestion. The 120 is a one handed unit but the 150 is a bit unwieldy for small gigs.

For all that, it is an extremely sturdy powerful unit that, with a mixer, one could even use as a PA. It certainly was big and powerful enough to take my electronic drums throug them and still have plenty of power left over.
De ajutor · De nici un ajutor · semnaleaza un abuz
Raportează evaluarea…

Manipulare Caracteristici Sunet Măiestrie
CRAPPY MONITOR ALERT!
15.06.2016
I initially bought the box MA120 MKII for use with my Alesis sample pad as it was under the section for electronic drums amplification. I was buying this item confidently as the majority of reviews were good.

Upon plugging in the monitor I immediately noticed that the standby button was not working. I then connected my sample pad to the monitor and was shocked by the poor sound quality of the said monitor. The sound was very weak and could not turn the volume up more than half way as the monitor would start to clip. I informed Thomann about the problem and they offered me to exchange the item for another one. I opted to upgrade and pay extra for this monitor instead as I thought that I was making the right choice.

Upon receiving the parcel I noticed that the unit was massive and really heavy, making it almost impossible to carry it without any help. I thought that all the extra weight meant better quality. How wrong I was!

To my surprise, the standby button was not working (again!) and while the volume was a little bit louder, I still had the same clipping problem and overall low volume. This time, I did not ask Thomann for an exchange, neither for a refund as I had already paid the postage twice for this piece of crap. Instead, I asked whether the standby button is supposed to work or not and to suggest a solution for my problems. This would obviously cost them nothing. However, they opted to say that there was nothing wrong with the first unit in the first place and from then on they did not reply to my emails.

Being a regular Thomann customer and having spent a lot of money on instruments throughout the years I feel offended and disgusted with this experience and probably I will never buy from Thomann again. I also found out that reviews are very misleading and that the cheaper the instrument, the better the reviews are. Isn?t that strange?
Now for the PROS and CONS. Still has more PROS than CONS though!

PROS:
1. Ideal for power lifters, body builders or big guys who like to add an extra training session to their routine while at the same time enjoying another hobby. Also ideal for the employee willing to destroy his back and get some sick leave.
2. Covered with nice carpet.
3. Ideal for demonstrating how a monitor should not be built.
4. Can also be used as a stool by simply adding a cushion.
5. Cabinet is very robust and can be used in circuses for some elephants stepping on it.
6. Quickly fills up large empty spaces.
7. Has a nice black colour.
8. Looks like it is a quality monitor.
9. Has many good 4-star rating reviews, while 1 or 2- star ratings do not have any reviews.
10. Has all the controls on the front, making it very practical to adjust settings.
11. Can connect another monitor or another speaker to it.
12. Has a nice kettle plug that can be used as a spare power cord for your electric kettle.
13. Can also be mounted on a very sturdy stand.
14. Ideal for low volume setups.
15. Made in China ? the world?s largest economy.
16. Comes in a great box that you can use to store large items.

CONS:
1. Really heavy to carry around.
2. No adequate handles for two people to carry this thing around.
3. Standby button for decoration purposes only.
4. Weak volume.
5. Cannot turn up the volume more than half way as it starts to clip.
6. Crappy sound quality.
7. Does not have a jack input.
De ajutor · De nici un ajutor · semnaleaza un abuz
Raportează evaluarea…

Manipulare Caracteristici Sunet Măiestrie
Works perfect for my home studio
Ronsthebg, 09.02.2019
I ordered this monitor not only for the price but for the 150 watts to match my M-Audio speakers. The only negative things I could say is it only has one XLR input on the front with no inputs on the back but its not a big deal.

I have it connected to my monitor out channel on my mixer and so far it works really well. Great sound, no noise and well built. I use it also for my Alesis Command Mesh set to blend the drum sounds with the other L and R Monitors. I am happy with my decision and Thomann has been a great help with my audio needs and questions. I ordered online and the equipment can quickly and in perfect condition.
De ajutor · De nici un ajutor · semnaleaza un abuz
Raportează evaluarea…

Choosing a PA System
Whether youre a fan, a promoter or a performer, the refined craft of live sound is vitally important.
descarcare gratuita 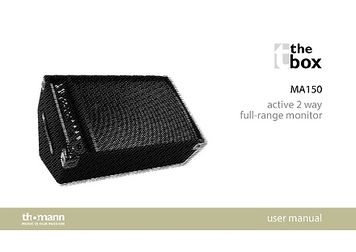