Sunet Măiestrie
Good for the price
TrEr, 03.10.2019
These strings are advertised as having a "BRIGHT" tone but that's really just for a couple of hours. Depending on how you look at it they either go dead very fast or they are extremely dark sounding for a roundwound. They have a really nice "dead" sound though. They're not muddy at all and even though they're dark they still have a nice focused attack. The best word I can think of to describe the tone is "dry".

There's a rumour on a certain online bass forum that these are actually the same strings as the more expensive Rotosound Nickel 66 (the ones in the blue packaging) just without the silk. That's simply not true. The Nickel 66s sound different and last much longer before they do dead/dark. I actually got this confirmed by Rotosound, they are NOT the same strings.

These Rotobass strings are only suitable for people looking for a dead/dark roundwound tone. If you're looking for a bright tone you would have to change these strings at least once a week.

Still, I like these strings better than most of the other cheapo nickle plated sets like D'Daddario and Fender but then I like a somewhat dark roundwound tone. I like to have at least one bass strung with worn, mellow roundwounds and the Rotobass sets are great for this.

Recommended as a decent allround nickle plated roundwound on a budget but only if you are looking for a dark/dead sound. If you want brightness you're better of spending a bit more on higher quality strings. It will be cheaper than replacing these every week.

It's difficult for me to rate these strings because personally I actually like their "dead" tone. But they're advertised as "BRIGHT" and in that regard they're a total failure and I guess they should be rated as such.
De ajutor · De nici un ajutor · semnaleaza un abuz
Raportează evaluarea…

Sunet Măiestrie
These strings give a special twist to your sound!
Perwanie, 06.12.2017
I recently bought 2 the same basses (Ibanez SR600 japan ) which one of them only had 2 strings. Firstly i filtered Thomann to ' price from low to high '
Next i saw: Rotosound! My favorite size strings were one of the cheapest. I directly ordered them and i was really surprised about the sound: the old strings of one bas sound deep and a bit jazzy/bluesy ( also good for metal )
But these Rotosounds really are what they are saying that they are: BRIGHT!!
They gave my bass a rather telecaster bass sound and also is really really REALLY good for slapping, great for funk or for, as it says, a bright sound

Cons:
The bright sound might make your bass sound a bit too bright in some situations.

Sunet Măiestrie
Learning Funk
Manych, 19.05.2020
Good attack for funk. Bright. And at the same time this strings are good for another styles, for me - playing Bach and shuffle. For slap may be thick, little a bit, but sound is good
Nowatime no cons. Very good strings in this class price/options
De ajutor · De nici un ajutor · semnaleaza un abuz
Raportează evaluarea… 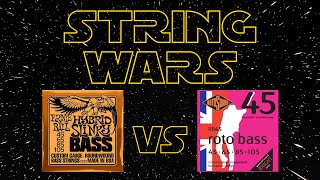 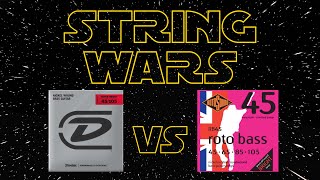 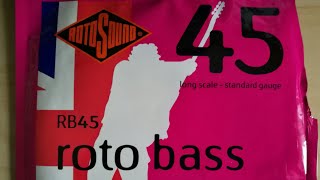