Măiestrie Caracteristici Manipulare Sunet
a good starting point for some
29.10.2014
So after long debate and a load of research i decided to go with Motu because of its reputation of making hard waring , sleek looking , feature packed good sounding interfaces and as an added bonus for some they are USA made which is a rarity in this day and age especially in the 828x price bracket.

I found that it worked with protools 10 as well as cuebase and that it ran with only a few bugs that were fixed with updates.

I found the ad/da on the unit to be above others in its price bracket such as the focusrite scarlet range etc and that the pre amps were of an okay standard, nothing spectacular but solid . The soft limit is a great feature when, for example recording a dynamic sound without clipping e.g. kick or snare drum.

The dsp mixer took a little getting used to but is good and flexible enough to get the job done in the end and the dsp effects are a great feature and save cpu!
De ajutor · De nici un ajutor · semnaleaza un abuz
Raportează evaluarea…

Măiestrie Caracteristici Manipulare Sunet
unbelevable connection rooting
Guðlaugur, 01.05.2014
This is an amazing sound card/ mixer, witch can be used as main recording input device and at the same time act as you main mixer in the studio, for practicing or just connecting you media devices without worrying if your computer is turned on. expansion options are unbelievable and the price is incredible for what you get.
The CueMix FX make setting up the 828x so easy that little to know knowledge is needed to make a simple but good setup for individual in/out put very fast.
being both Thunderbolt and USB makes it easy to use on more then 1 computer.
It's one of the best investments I made over several years
De ajutor · De nici un ajutor · semnaleaza un abuz
Raportează evaluarea…

Măiestrie Caracteristici Manipulare Sunet
Mr Lookman, 20.02.2021
Having used my Motu Ultralite for more than 10 years with no problems at all.Now I decide to change my interface and I bought Motu 828X and I am very happy.The well known built quality of Motu ,flexible mixer easy to use, with great sound.Value for money.!
De ajutor · De nici un ajutor · semnaleaza un abuz
Raportează evaluarea…

Măiestrie Caracteristici Manipulare Sunet
One awesome piece of kit
Stephen662, 02.08.2015
Having used my trusty MOTU 896HD for over 10 years, I thought it was time to update, since I have a new Mac with Thunderbolt. Wow!

This unit sounds great; an improvement over my previous model - the difference soundwise is marginal, but perceivable. Note; I really only use the line inputs for recording modular synths and drum machines, so I can't really comment on the pre's on the model, as I have yet to plug a microphone in. To be honest, if I was using this in a studio situation (vocals, guitars drums etc.) I would probably add a pre-amp expander; you'd need more physical inputs anyway.

Talking of expansion, I was thrilled to realise that my old trusty 896HD does not have to go to the dump or eBay. It can, with the addition of a £3 optical cable, be used as a satellite to the 828x, giving me another 8 channels :)

Now, this is brilliant! Basically the MOTU Cue Mix software will see the satellite as an extra 8 ADAT inputs on optical, and will offer all the tasty trimmings of said software to my old hardware. Of course, any of the MOTU models with optical will do this, so the 828x is brilliantly expandable.

The Cue Mix software can be pretty invisible if you are working with your DAW, but it adds some really nice features (that you can add in the background without using DAW resources) such as EQ, Reverb, Compression. You could for example, use the Cue Mix / 828x to provide some nice mix glue on the final output, without straining your PC or Mac. Additionally, these features let you walk away from the computer completely if you need to take the interface out to a recording session - all the features are available with the MOTU running as a stand alone piece of hardware.

The quest for low latency is one we're all after. Well, believe me, running the 828x on Thunderbolt is nothing less than stunning. under 3ms. How does that grab you? That's with a large-ish (24 tracks) Cubase 8 project, lots of plugs, compression & EQ on everything, Kontakt, synths, etc. I got it down to something silly near 1.5ms with running just audio. I know, I know, it is a system wide thing - but with the old 896HD I could never achieve much below 6ms in a useful setting. So this is a massive improvement - the drivers are razor sharp. 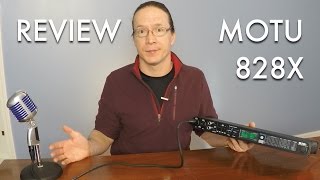 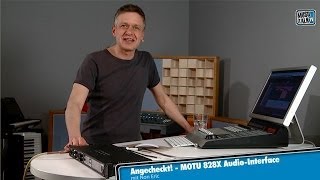