acabamento resposta do trigger
Proud owner
Animale , 06.12.2020
After a long period of comparing basedrum pedals, I came across the Trick Dominator.
I just needed a pedal next to my old, trusty 1st generation Tama Iron Cobra that was better suited for adjusting it for playing with different beater heights. I thereby decided it was time for the option of a pedal height adjustment.

There is a beautiful, fairly new model 100€ Tama pedal that has all these option.
I already decided to go for it and skip the Dominator, but then I learned about this laser trigger option.

I started researching again, only to find out that there are very few really good articles and video's that demonstrate and review this laser trigger system.
Not one have I encountered that really showed this laser trigger in action in combination with the Dominator pedal.
My review here will be the first, I think that says enough about the scarce info to be found about this set up.
I did encounter a clip that explained how to install the trigger on the Dominator pedal...which was supposed to be a few minutes job.

So I took the gamble and purchased both the pedal and the laser trigger in one go.
And I wasn't dissapointed. Installing the laser indeed took just a few minutes.
And it was not a difficult install either.
I even kept wondering how it was too easy to install.
I Already prepared myself psychologically for a whole lot of problems and headaches.
I put it on the basedrum, cranked it on, and....it worked at the 1st go.

They say that having children is one of the happiest moments in one's life. I don't know about that, but to see this working immediately after buying it on a gamble and installing, was truly a feeling I will never forget:)

Now, after months and months of playing and testing, I'm writing this review.
I have used this Dominator pedal/trigger on different basedrums on different locations.
At home it's beating on a 18" Evans clear basedrum skin (one of the cheapest), and triggering goes via an Alesis Strike Multipad. I don't know how they did it with the laser, but it even works with velocity.
I was a little worried it wouldn't be so sensitive because Trick relies heavily on the heavy metal scene with drummers and their double pedal setups with lots of machine-gun basedrum playing, but the velocity works for subtle playing too.

And in all those months, the trigger hasn't missed a beat.
Not a single one.
The trigger installment is locked with a drumkey and a hex driver, and the faultless operation means it's really locked for life.

It comes with it's own, heavy duty jack cable with an angled jack to plug in under the laser module. At the bottom side, right next to the power adaptor plug insert. And that's a thing to keep in mind, because a straight jack won't go under there.

I even put the pedal against a piece of wood: trigger still kept on working the same.
That means you can put this pedal against any material that can withstand the beater, and as long as you have some kind of soundmodule with trigger outputs, you will always have a kick sound.

Handy for those unexpected nightmare gigs when your basedrum skin tears up and can't even be patched. Just tape anything (like the lid of a the flightcase) on the basedrum batter side and you can keep on going. That's another reason you always carry duct tape.

And I add for your information that this doesn't work on vibrations like normal (Piezo) triggers.
It works with the laser on a fixed point registrating when the cam flies by and stops. So that also means the beater angle is not an issue.
That's why they deliver another cam with this trigger set.
You'll have to replace your original Dominator cam with the provided one, because it's modified for the laser trigger.
So this means it will never false- or double trigger, even when the whole stage is vibrating up and down.
You can even see a blue light flickering with each trigger, which sure is another cool factor in the dark surroundings.

Not for nothing Trick has patented this laser trigger, it's their own invention, and I might say a real game changer.
But an expensive one.
I'm playing a lot with external triggers so I already use my Multipad as part of my set-up.
Added to the fact that on average I play more on other, provided drumsets instead of my own kit during gigging, there's another big advantage for no longer being dependant on "guest" kick triggers (that too often don't work immediately, or keep on double triggering during the whole gig because the technician just can't get it right).
With this pedal, you will always have your own kick-trigger with you, and it will always be more reliable than anything they have.
Just don't forget the power-adaptor. And the angled jack cable.

For the drummer who only plays 1 triggered sound during the whole gig as an alternative for miking, and mostly on his own set up, this will be a very expensive solution.

But: if you want super reliable triggering second to none in any kind of circumstances; this is your thing.
You only got to buy the Dominator pedal with it!
Útil · Não útil · Reportar a crítica
Denunciar classificação… 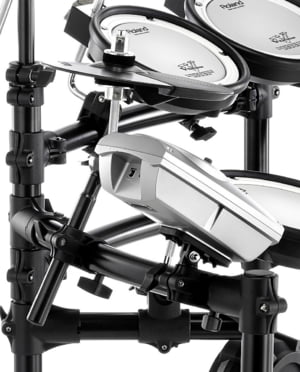