Reportar
características som acabamento
Need some more like this
27.01.2016
I bought this one just to try out a ribbon microfone, BIG surprise on everything I used it on so far.
Sometimes its the only one I need other it is the best team player in conjunction with other microfones.
Will probably buy some more.
Útil · Não útil · Reportar a crítica
Denunciar classificação…

características som acabamento
T Bone RM700 Ribbon mic - relatively average budget mic with one special trick up it's sleeve!
Cirrus, 28.01.2014
This is an interesting mic. My understanding is that they're made in China and branded with the T-Bone name for sale in the EU, and also sold in America under a different brand name.

It's a budget ribbon mic, most likely aimed at people who might have a low end condenser, a couple of '57s, and are curious about the "third kind of mic". It's very well built; despite its lollipop construction it's all metal, feels sturdy and comes with a good shock mount, wooden carry case AND a padded aluminium flight case!

As with most Ribbons, the RM700 has a figure of 8 pickup pattern which makes application and placement quite critical - it hears equally well in both directions, so the room sound is as important as the direct sound. Ribbons tend to exhibit strong proximity effect - a low end build up as you move it closer to the sound source - so care must be taken to utilise this effect well. While most ribbons have low output, the RM700 seems relatively powerful thanks to its onboard transformer, however this is at the expense of some sound quality - while most Ribbons are quite dark sounding, the RM700 is even more mellow than most, and it lacks some of the snappy low and midrange detail that more expensive Ribbons such as the Coles 4038 and Royer 121 possess. HOWEVER - given the price points, it would be churlish to compare them too much.

Ribbons tend to be very sensitive to wind blasts from vocals, kick drum holes, bass ports etc. The RM700 seems to be more rugged than most though, and is rated to withstand high SPL levels. I found that the treble can be improved by opening the mic up and removing some extra pop shields that are taped in place. However as this makes the ribbon less protected and voids the warranty I'd not recommend it unless you're feeling particularly brave!

The mic has one strength that I think makes it very worth the money: The low-mid range. While on its own it can be quite dull, I absolutely love it when paired with another mic on guitar cabs. Alongside an SM57 on a guitar speaker, the RM700 brings out a really thick but rich lower midrange that adds depth and power to clean and distorted tones. It's my go to setup for recording my Vox AC30, and has also worked wonders on higher gained rigs too.

For that reason alone I think this mic justifies its existence in my collection, and I'd recommend it to anyone looking for a second mic for guitar amp duty.
Útil · Não útil · Reportar a crítica
Denunciar classificação… 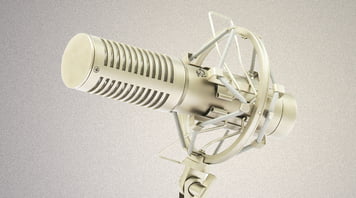 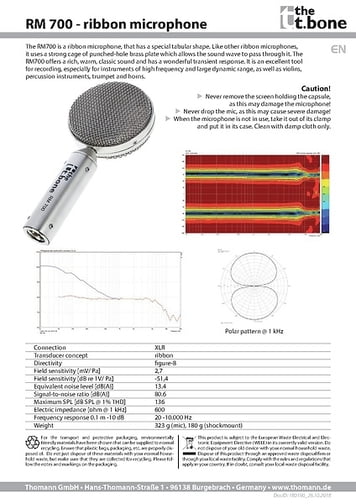