acabamento características manuseio som
Tiny, bomb proof, ad beutifully finished.
Jonathan840, 24.09.2013
This was bought as an alternative to the digico ubmadi, and the older express card madiface, with a view to use it for archiving live shows, recorded from either digico or digidesign consoles, though will work with any madi capable unit, and for using those archived shows for virtual soundcheck possibilities while touring. This, it does flawlessly, using any of the the DAWs Ive access to, reaper, cubase, logic, and pro tools, without any issues, or glitches, in fact, less issues than my moto 828 hybrid. In addition to this work, I needed to finish mixing an ep for a band I was working with on the road, and this unit allowed me to use the live console I was touring with, coupled with Pro Tools 9HD to act like a mobile studio, and overdub a few vocals, and add some drums, all seamlessly, and on a 3 year old cheap HP laptop bought from a hughstreet chain in a hurry

acabamento características manuseio som
Very reliable piece of gear
08.12.2015
I bought this unit to connect my SPL Madison DA/AD converter to my computer and as expected I had no problems with it (never had any with RME gear).

The driver is super stable. I was aware that some users mentioned issues when using external clock at higher sampling frequencies, but I had no problems at all. I clocked it by Madison's internal clock and it works as stable at 96KHz as it is at 44.1KHz (never tested it at 192KHz).

There are only 2 things I don't like about this unit - there is no power switch, and there is no monitoring output. Even a simple headphone jack output would be of a great help, but there is none. Everything else is perfect.
Útil · Não útil · Reportar a crítica
Denunciar classificação…

acabamento características manuseio som
Recommend!
21.04.2016
Nice little device. After setting it up (easy) You can forget its existence - it is very-very stable, works 100%. I'am using SPL Madison with it. DAW's I'am using: Logic Pro and PreSonus Studio One.

acabamento características manuseio som
Great product
wutevawerks, 13.07.2018
Used this to run recordings and playback for multitracks from a computer source to the console via MADI, great for doing training and shows, although the caution is always to get a reliable PC at the other end, because a solution is only as good as your weakest link.
Útil · Não útil · Reportar a crítica
Denunciar classificação… 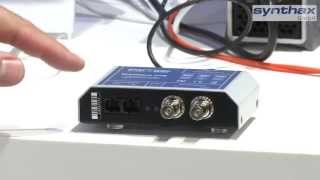 Mostrar todos
Audio Interfaces
There is a wide range of audio interfaces available, and in the end, choosing the right one comes down to your personal preference.
Mostrar todos
Recording E-Guitars
Our aim is to explain the basic process of recording the electric guitar!
Mostrar todos
Home Recording
Home Recording can be very complicated. We're here to offer some advice!
Mostrar todos
Computer Based Studios
This article will look at how to integrate a computer into different studio environments, and will highlight the issues of functionality and connectivity.
Resultado do teste:
Ler review