acabamento características manuseio som
For sound design on the road, look no further
rbbrnck, 17.03.2020
"Immersive sound" is quite the buzzword, these days. And, as such, a term often misused to describe things that are not, per se, immersive.
But, with the need to prepare, adapt and review sound design projects that are meant to be hosted onto a multi-channel, spatialised sound system while being away from it, the RME MADIface Pro has practically no competitor in terms of both audio quality and pack-efficiency factor.

Sure, RME MADIface USB in comparison packs twice as many (MADI) channels, spread across its optical- and coaxial interfaces, and at a very appealing purchasing price, indeed. Without the ability to plug in even the most basic of headphones to it, though, or a voice-over / slate extra input for quick audio notes to a project, sad truth is, it is not as much a carry-around device for the commuting sound designer like this MADIface Pro is, indeed.

"Other than" for its MADI-specific settings and options, the RME MADIface Pro's operation, behaviour and physical appearance is exacty that of its Babyface Pro sibling, "only the optical connectors differ" – internally, of course, such statement belies that the addition of MADI functionality to it makes for a totally different PCB (and engineering inception, too).

What the simplificity of the statement means, though, is that what is known to be RME-specific, and RME-good, is to be found here, as it is in other RME devices, too: uncoloured analog front-end, neutral sonic transparency, wide dynamic range, driver stability, low latency, the once-understood-practically-irreplaceble Totalmix interface, and the forum-recorded, always-timely support policy – they're all at hand here.

In these days of audio-over-IP frenzy, though, some wonder what's the purpose of a pricey piece of equipment that needs to be physically hooked up as a point-to-point interface, albeit optical, to deal with the usual complement of cables and connectors of different size, gender and specs...

As in my own specific application, audio-over-IP may have taken control of the transport backbone of an installation, or system, but at a musician-level kind of expertise, a plug-and-play experience is not yet within hands' reach, other than on an hardware-specific device like this.

If you need to provide your artist guests a box, a tool to swiftly send and receive 64 channels of high-res audio to and from a professional mixing console, without them getting tangled into a configuration maze, while avoiding the software compatibility bottlenecks that different OS pose to network protocols at every major update release... look no further, and grab this.

Operation of the optic transceiver is spec'd on the manual to require the (supplied) power supply unit, and that's a true fact; a most welcome discovery, though, worth to be mentioned here (because I couldn't verify it before my purchase), is that addressing ALL MADI output channels "in vitro", i.e. without a physical, optical line attached, does not – so you can practically mix all 64 of them to output 3 and 4, and monitor them on your headphone, without having to plug into the AC mains... now, that's commuter's delight for working on trains, planes, and cheap motels' rooms!

Another less-than-obvious application comes with the addition of a portable powerbank (in particular, a model mentioned on the RME forum does the trick better than the generic, phone-only types): even without a USB host, the unit powered as stand-alone device provides two high-quality preamps with 48V phantom power suitable to hardware recording and/or listening practice, albeit unrouted through their pan pots - it's the output of my guitar's stereo multi-effect processor turned headphone-ready for hotel room practice, or the recording of an acoustic combo by a stereo set of quality microphones... at this type of audio quality, it's yet another feature that becomes soon addictive, for the discriminating user.

Last, but not least, the functionality of Totalmix interface makes for a quickly-configured volume-controlled 64-channel playback system front-end: a fader group containing all MADI outputs and the main mix fader can be level-controlled by the dial/jog wheel on top of the interface, a very practical means to set the overall playback level without the need to program a MIDI fader, or a control surface for that!

Now, if I sum all the features mentioned in this review, while being aware that I haven't described all of those existing on the device (and probably not even half of them), how can't I call the price of this MADIface Pro outrageously convenient? Having saved myself the effort and cost of a dedicated talkback box, fader control, and studio monitoring "knob" control interface, makes the rest of what's inside the RME MADIface Pro feel like it has been thrown in the box for free.
Útil · Não útil · Reportar a crítica
Denunciar classificação… 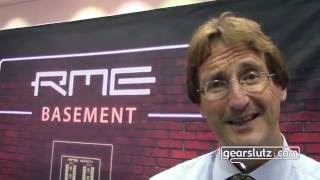 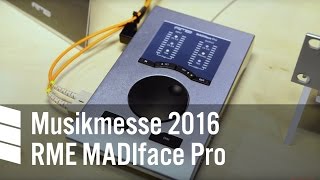 Mostrar todos
Audio Interfaces
There is a wide range of audio interfaces available, and in the end, choosing the right one comes down to your personal preference.