Aviso: Register your purchase at www.w-distribution.de/Warranty for an extended warranty of 4 years.

manuseio características som acabamento
Excellent for the price
BoundForTheOcean//Official//, 29.05.2018
Got this pedal for my stereo bass + pitch shifted 'guitar' rig, as an attempt to avoid paying copious amounts for an EHX POG2, and as I can say honestly, I don't regret it at all

for an octaver the fraction of the size and price of a POG2 and with almost all of its main features that I wanted (octave up, down and blend-able dry signal) as well as the added 'eq' switch for either a fatter tone, or a more controlled-tight tone, and a swell function, I really couldn't argue

the first time I ordered this pedal, it arrived, and I took about an hour trying to get it to work until I came to the conclusion that it was defective, which planted a few seeds of doubt in my head, so I returned it, and received a new fully working one, and those doubts instantly disappeared, this is superb.


pros;
absolutely tiny
great features especially for such an inexpensive pedal
sound is scarily similar to EHX POGs ((*hence the MKI vanished </3*))practically no latency on its own, atleast none i can hear

cons;
can be a little noisy with distortions, especially fuzz
pink isn't my colour

Mostrar todos
Modulation Effects Pedals
The term modulation in its broadest sense covers a range of sonic effects, from the subtlest chorus to ear-bending ring modulation. 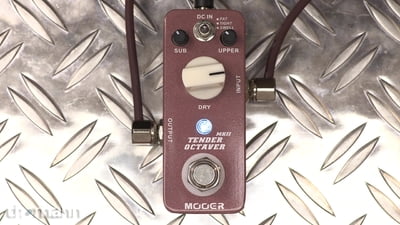