som acabamento
Decent set of strings, nothing special
Zeka, 27.03.2020
I use these strings with my Fender MIM Classic 70's, and really they produce nice sound, and seem pretty strong.

I had them on for the past 2 weeks, and I think they are about ready for a replacement. First and second strings lost the nickel plating over several frets, where I bend the most. They don't sound as clear as a week ago. It's more or less in line with any other 9's in the same price range. They did endure a lot of abuse, didn't break any of them yet.

Pros:
- strong
- great sound in the first week or a bit longer (depending on your style of playing)
- color coded ball ends

Cons:
- Nothing special, would like the tone to last a bit longer.

Maybe I'm asking too much from a set of strings that cost less than 5€.

I'll be trying Pyramids pure nickel round wound 9's, they do market them as "Long lasting", they are made in Germany and cost less... so we'll see.
Útil · Não útil · Reportar a crítica
Denunciar classificação…

som acabamento
Not recommended
24.11.2016
This string set came as the stock set with my new telecaster.

At first they sound nice/okay but after one (or 1,5) week they turned to rusty black and my fingers as well from the strings. And they had tuning problem after that one week.

If you gig/jam regularly and change your strings per week anyway, you can save some money with this budget set. Otherwise, I'd recommend to go with other well appreciated brands.
Útil · Não útil · Reportar a crítica
Denunciar classificação…

som acabamento
darragh7421, 26.04.2020
Great sound, very easy on the finger (If your calluses arent hardend enough and are great for beginner players. They keep there tone for long durations of times and arent effected to badly by a wah bar. I would definetly recomment to someone who is looking for a good sound and long lasting strings.
Útil · Não útil · Reportar a crítica
Denunciar classificação… 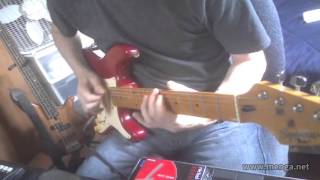 Mostrar todos
Guitar Strings
Without strings, guitars and basses produce no sound, yet most players know very little about them.
Resultado do teste:
Ler review