Great cajon for beginners that doesn't want to spend much money.
Gupster, 25.08.2017
I am percussionist for 7 years now and I've never tried to play a cajon because I never had a need to play this instrument, but I wanted to give it a try.
It was packed in one cardboard box and in that box, there was my cajon in its bag. After I tried it for the first time I heard a weird sound, so I decided to use some tape to tape the strings to the playing surface, and it helped. If you have the same problem, you know how to fix it now ;)
I have used this cajon in some gigs, and also when playing in some home parties, and they said that the sound that was coming out of this box was great. I also think that the sound is good, for this price you can't really expect much more.
Pros(+):
Cheap,
Good sound,
Comfortable to play for longer sessions,
Bag included,
Looks better than cajon who is all in one color.
Cons(-):
The sound without fixing the strings to playing surface with tape.

dźwięk wykończenie
best ratio quality / price
savethanks, 24.02.2020
This is the first cajon I've bought but not the first I've seen in my life.
for what is costs it's perfect, really satisfies my and my hands!
it is solid, good looking and sounds good. I'd say it's the best stuff a beginners could get.
another win from thomann's products
Przydatne · Nieprzydatne · Zgłoś nadużycie
Zgłoś nadużycie...

dźwięk wykończenie
DimDrum, 03.05.2019
I do not play much Cajon, but when i have to use it for the gigs as an acoustic base drum, it works fine. One of the wires inside got broken after 4 gigs, didn't bother me much thou. Does the job by acoustic "yard/by the fire gigs" as well. Definitely not the best Cajon there , but it is very affordable and does the job.
Przydatne · Nieprzydatne · Zgłoś nadużycie
Zgłoś nadużycie...

Cajon Kit Dimensions: 44 x 29 x 30 cm, Body material: birch, Playing surface: birch, Thanks to its medium size, this kit is suitable for both young people as well as adults, Ideal as a project, All... 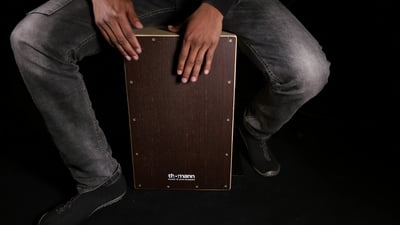